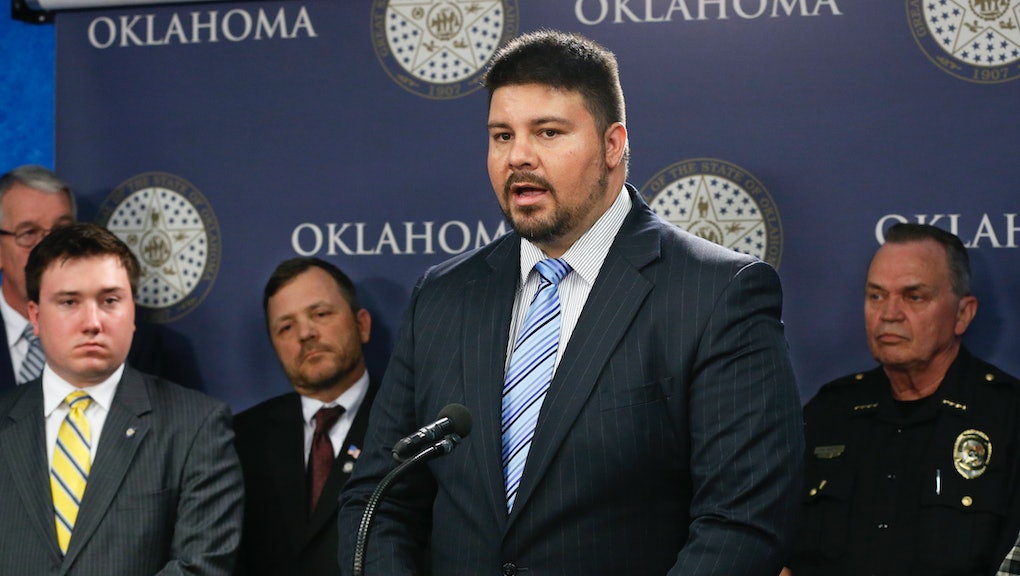 Listen up, all you wild-eyed Republicans pressing for transgender bathroom bills in the name of protecting vulnerable women and children from assault. Look among your own ranks and you'll find quite a few who have posed a danger to kids. In the last three weeks alone, two key GOP spokesmen have been busted for advocating man-on-boy sex. By contrast, there has not been a single reported instance of a transgender person harassing a non-transgender person in a public restroom ever.

The latest GOP black eye involves one of Trump's earliest campaign supporters and Oklahoma county coordinators. Married-with-children Senator Ralph Shortey was released yesterday on $100,000 bail after getting caught with a 17-year-old male, an open packet of condoms and a bottle of lotion in a Super 8 hotel, 936 feet from the First Christian Church. The family values legislator is charged with three felonies: engaging in child prostitution, knowingly engaging in prostitution within 1,000 feet of a church and transporting a minor for prostitution/lewdness. Of course, in the American legal system, he is innocent until proven guilty.

That said, it's going to be mighty tough for Shortey to explain away sending a text to a youth who offers to pay for "sexual stuff," and promises to "fuck you like a good little boy if you keep calling me daddy" prior to taking the boy to a local hotel.

Shortey's arrest comes on the heels of another pederasty headache for the GOP — last month's ousting of Trump's prize campaign troll, Milo Yiannopoulos. He was disinvited from the Conservative Political Action Conference (CPAC) and then tendered his "resignation" from Brietbart News after tapes of him defending sex between "sexually mature" 13-year-old boys and grown men surfaced recently.

While Milo is, for better or worse, an out, if self-loathing, gay man, Shortey's hypocrisy arrives clad in spotless conservative credentials similar to those of other homophobic Republican congressmen arrested while trolling for sex with guys. Highlights include a degree from Heartland Baptist Bible College, plans to do missionary work in Uganda, an endorsement by Arizona Sheriff Joe Arpaio for his anti-immigration stance, and cred as a birther who supported requiring presidential candidates to present their birth certificates to get on the ballot.

None of that earned the former family values golden boy a jot of loyalty among his colleagues, not even in a state legislature that has been rocked by sex scandals over the past year. Shortey's former pals stripped him of most of his privileges, including his office and parking space, the moment he was charged, in sharp contrast with the leniency shown to straight male colleagues accused of sexually harassing younger, subservient women staffers.

True, Tulsa Republican Dan Kirby finally did resign in February, but that was only after a second female legislative aide came forward to say that he solicited nude pictures of her and made constant unwelcome remarks about her body and attire. (The first was awarded $44,500 in public funds.) After a minor in the House High School Page Program said Fourkiller's comments made her feel uncomfortable, and despite not meeting with the Committee investigating his case, he was merely banned from any direct involvement in the program for a year and directed to attend sensitivity training.

Not so for Shortey. By the time he was charged, colleagues on both sides of the aisle, plus Governor Mary Fallin, began calling for him to resign.

The smart money says that Shortey will be forced out before the weekend, and Republicans everywhere will sigh a sigh of relief and wash their hands of him as quickly as possible, as they have with Milo. But they would be wise to heed the fate of Lady Macbeth, who learned the hard way that bloodstains linger no matter how hard you scrub.

Maybe, guys, it would be best to steer clear of boys and bathrooms.