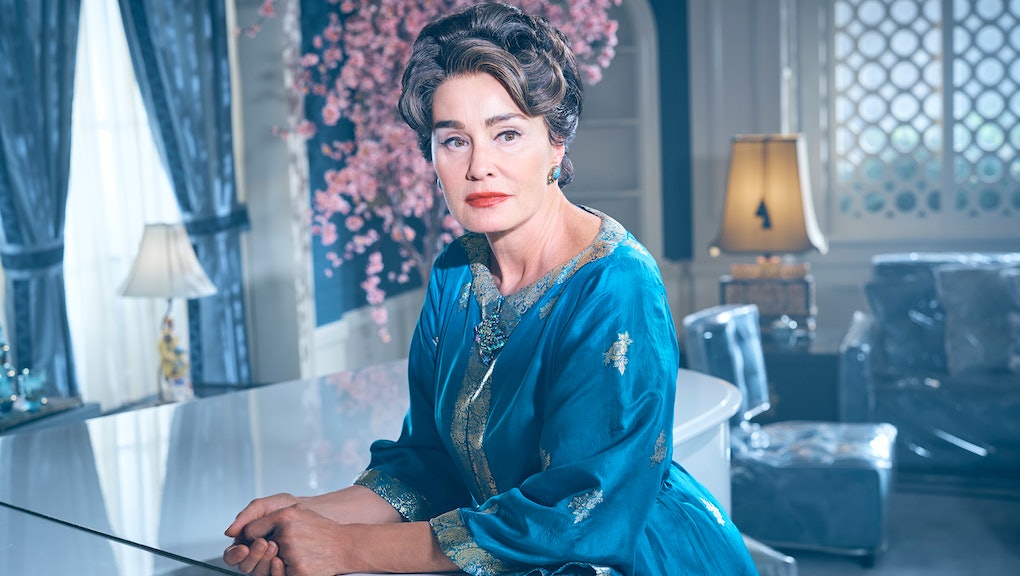 Jessica Lange's Joan Crawford is the best part of 'Feud: Bette and Joan'

FX's Feud: Bette and Joan is like one of the clubs Stefon used to describe on Saturday Night Live. It has everything: drama, Hedda Hopper, debates about category fraud at the Oscars, Susan Sarandon in Bette Davis drag and Catherine Zeta-Jones — who almost certainly has never heard of Olivia de Havilland — playing Olivia de Havilland in flash-forwards.

Feud is one of half a dozen shows competing for your attention Sunday nights alongside Big Little Lies, The Good Fight and more. Unlike the others on its night, it's the series least in need of examination, because it is itself a dissection of its subject. Ryan Murphy's latest anthology is a living, breathing think piece on the way Hollywood manipulated and used — and continues to manipulate and use — women, particularly actresses.

Thus, Feud is best enjoyed for its stellar performances and camp value. Sarandon's Davis is a ton of fun, and we could listen all day to Zeta-Jones intone, "Feuds are never about hate. Feuds are about pain." But the best part about Feud is, without question, Jessica Lange's Joan Crawford

At first, Lange's Crawford is disarming. She doesn't look a whole lot like the late actress, nor is her voice much of an approximation. Watch and listen to this interview for comparison — sure, there's a similar kind of cadence, but imitation is clearly not Lange's goal.

Instead, as it's become clear over the last three episodes (and will become even moreso in the next two), Lange is playing Crawford as an idea versus as a caricature. She's using this woman's paranoia, her insecurity, her defensiveness — blending those elements up and serving viewers a veritable Crawford cocktail, instead of just a mimicry act.

As previously said, Sarandon is very good as Davis, but she's going more for a direct impression. There's little interpretation beyond what she — and we — have seen of Bette Davis. Imitation can be a difficult thing, of course; actors have won no less than Oscars for their work imitating another. Think of Helen Mirren in The Queen, or Matthew McConaughey in Dallas Buyers Club.

Interestingly, this serves as an almost perfect parallel to Davis and Crawford themselves: Davis was the actress to Crawford's movie star. The former was exacting and clinical in her work, while the latter was more of a performer than a technician. This could be evidence that Ryan Murphy and his team of writers and directors are purposefully framing the two characters this way — a meta element to Feud that makes it all the richer.

Whether it's a purposeful parallel or not, the fact remains that Lange is doing some of her best work in the Murphy canon here. She's won three Emmys already, and she's got tough competition this year, but she's worthy of another. She presents Crawford not as the monster seen in works like Mommie Dearest, but a deeply complicated woman hounded by her own demons.

There's nothing redemptive about Lange's work — this isn't Sarah Paulson as Marcia Clark, to say the least — but it's a fascinating sketch of Crawford. The woman she plays is messy and flawed; why shouldn't her portrayal be that as well?