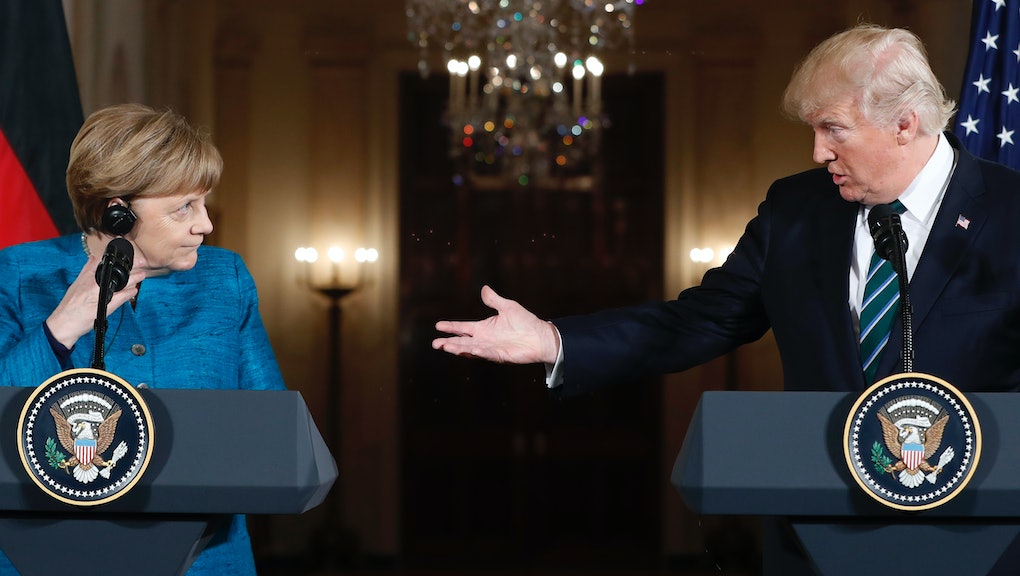 Trump thinks he and Merkel have wiretapping in common. They don't.

At a joint press conference between President Donald Trump and German Chancellor Angela Merkel, the president said that the two leaders "have something in common, perhaps" when it comes to wiretapping.

Though the comment was met with nervous laughter from the press, it suggested that the president of the United States is not backing down from his claim that his the Obama administration ordered a wiretap of Trump Tower during the 2016 presidential campaign.

But Merkel, unlike Trump, has a fair amount of evidence to back up claims of surveillance by the U.S. government. In 2013, it was first discovered through leaks by Edward Snowden that the U.S. National Security Agency had tapped Merkel's phone communications. WikiLeaks later released what it said were transcripts of conversations between Merkel that showed that the U.S. government had been surveilling high-ranking German officials for decades.

Earlier this month, Trump sent a series of early morning tweets claiming he "just found out that Obama had my 'wires tapped.'"

White House press secretary Sean Spicer has recently tried to downplay Trump's allegation by saying that the quotes in Trump's original tweet are proof that the claim Obama had his "wires tapped" was actually a metaphor for broader surveillance techniques.

"The president used the word 'wiretapped' in quotes to mean broadly surveillance and other activities during [the campaign]," Spicer told the White House press corps Monday.

However, Trump's comparison on Friday suggests that continues to believe the Obama administration was literally listening in on his calls.