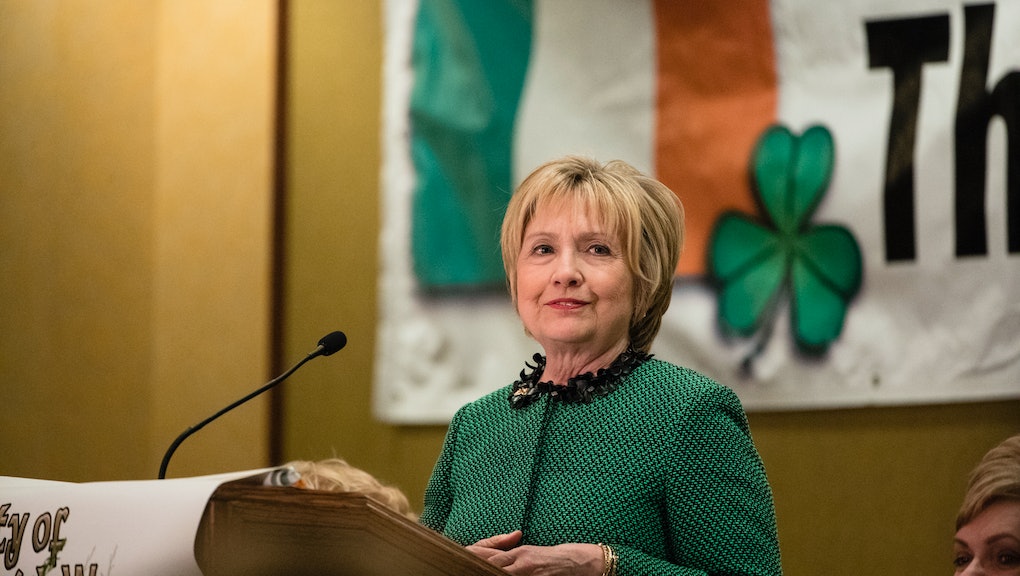 Hillary Clinton is "ready to come out of the woods," urges unity amid political divides

Over four months after the election, former presidential candidate Hillary Clinton is ready to re-emerge in the public sphere.

Since conceding the election to Donald Trump, Clinton has largely kept a low profile, though the former secretary of state has been spotted hiking in the woods near her home in Chappaqua, New York, and regularly attending Broadway shows.

But in a speech at a St. Patrick's Day event hosted by the Society of Irish Women in Scranton, Pennsylvania, Clinton said she could "only do so much" walking in the woods. Now, it's time to fight back.

"I am ready to come out of the woods and to help shine a light on what is already happening around kitchen tables, at dinners like this, to help draw strength that will enable everybody to keep going," Clinton said.

During her speech, Clinton was quick to recognize the deep political divides that currently exist, but urged Americans to overcome their differences.

"I do not believe that we can let political divides harden into personal divides," Clinton said. "And we can't just ignore, or turn a cold shoulder to someone because they disagree with us politically.

"We've got to keep trying to listen to each other, and to reason together, and to try to work to help people have better lives going forward," Clinton continued.

The cooperation and change that Clinton hopes to help spur, though, won't come from Washington, D.C. — but rather, she suggested, from people in smaller communities like Scranton, which holds personal significance for Clinton as her father's hometown. The Pennsylvania city is located in Lackawanna County, which Clinton won in the 2016 election by a narrow margin.

"What can we do to try to bring people together and to try to find that common ground ... so that we listen to each other again and we know that we can make a difference?" Clinton asked.

"I'm not sure it will come out of Washington yet, but I think it can come out of Scranton. Let's find ways to do that."