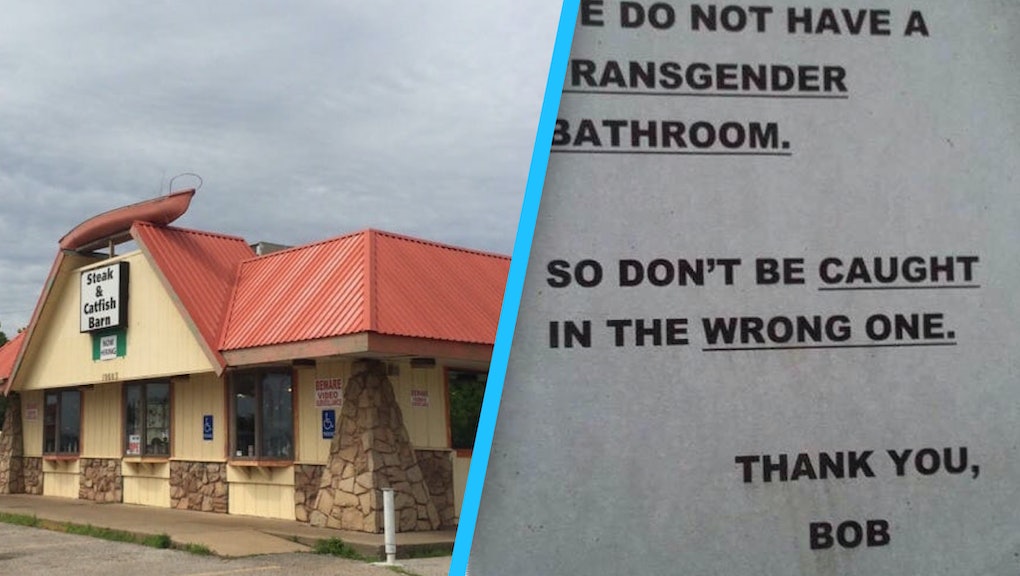 It's common for restaurants to post signs that proclaim "Restrooms for Customers Only." But at the Steak and Catfish Barn in Oklahoma City, customers are greeted (at the front door, no less) with a sign that's awfully hostile toward transgender people.

While restaurant owner Bob Warner posted the sign 10 months ago, the restaurant gained notoriety when a trans woman named Paula Schonauer noticed it recently, local NBC affiliate KFOR reported. Ten months ago would have been May 2016 — just after the debate about trans-inclusive bathrooms became a national conversation after North Carolina implemented a controversial law requiring trans people to use the bathroom matching the gender indicated on their birth certificates.

"That sign has an implied threat and a threat that's very real to me," Schonauer told KFOR.

And really, what does the message "don't be caught in the wrong one" imply? No service? Hostility? Violence? A spokesperson for Steak and Catfish Barn declined Mic's request for comment.

Warner told KFOR that he only meant to protect his customers. "If [a customer's] wife or their little girl walked in that bathroom and a man followed them in there, I wouldn't have a restaurant," Warner said.

But the argument that trans-inclusive bathroom policies might allow men to gain access to women's spaces, thereby putting women at risk, is a myth, Time reported in May 2016, citing a statement from the nation's top domestic violence and sexual assault prevention organizations opposing anti-trans initiatives like those prohibiting people from using bathrooms that don't align with their gender as assigned at birth.

"These initiatives utilize and perpetuate the myth that protecting transgender people's access to restrooms and locker rooms endangers the safety or privacy of others," the National Alliance to End Sexual Violence wrote in the letter, which was signed by over 300 organizations.

It seems Warner doesn't entirely oppose having trans people in his restaurant — he told KFOR that trans people can come dine at Steak and Catfish Barn if they are "dressed appropriately," but he gave no other details to KFOR on what that subjective response means.

The trans community and its allies swiftly dragged Steak and Catfish Barn on Facebook. The restaurant's rating is currently a paltry 1.4 stars out of five, and plenty of angry Facebook commenters referenced the offensive signage.

Here's a sampling of what people are saying on Facebook:

Predictably, other people rushed to defend Warner's restaurant and give it a five star review, many saying the other outraged commenters were "triggered liberal snowflakes."

As of Monday morning, administrators at Yelp had temporarily shut down the Steak and Catfish Barn Yelp page due to the influx of reviews based on the current news cycle about the eatery's bathroom sign.