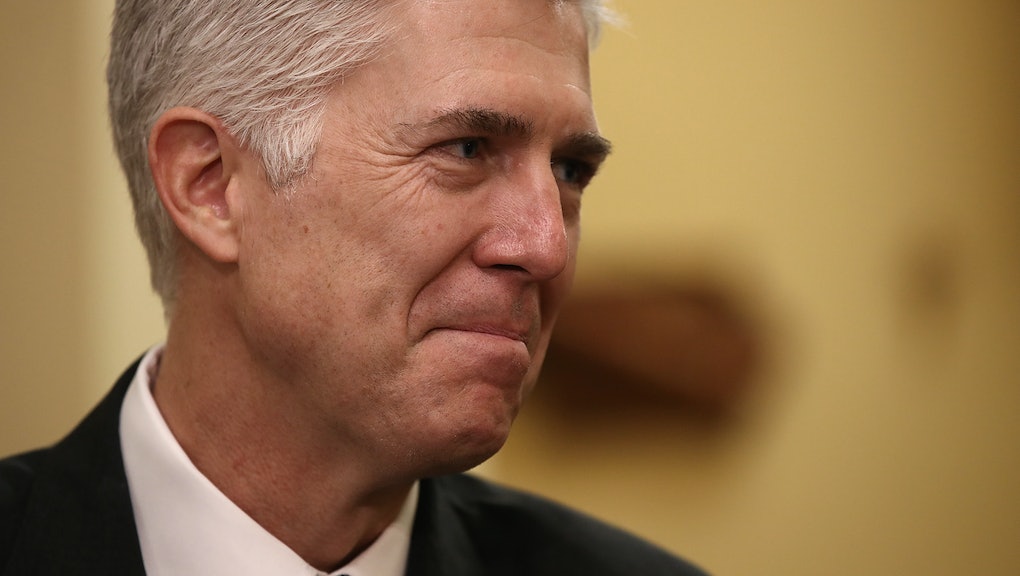 According to the Daily Intelligencer, Jennifer Sisk, who took Gorsuch's legal ethics and professionalism course in 2016, accused Gorsuch of implying "women intentionally manipulate companies and plan to disadvantage their companies, starting from the first interview."

The alleged incident occurred when Gorsuch opened up a class discussion about the assigned reading, which included a hypothetical example of a married female law student looking for a job while also hoping to start a family.

Sisk said Gorsuch asked students to raise their hands if they've ever known a woman who has taken advantage of a company's maternity leave. When only a few people in the class raised their hands, Gorsuch allegedly pleaded with the students, insisting everyone's hands should have been raised because "many women use their companies for maternity benefits and then leave the company after the baby is born."

"Throughout this class Judge Gorsuch continued to make it very clear that the question of commitment to work over family was one that only women had to answer for," Sisk wrote.

The Daily Intelligencer reported that "several documents" from the National Women's Law Center bolster Sisk's claims, including an email exchange that took place between Sisk and a University of Colorado dean to whom Sisk brought her complaints. Sisk said the university's deans pledged to talk to Gorsuch at the end of the semester, but she's not sure if they ever did.

An anonymous student brought up similar concerns, recalling other gender-biased comments Gorsuch had made during the same course. The student wrote:

Judge Gorsuch told our class that female lawyers get divorced at twice the rate of male lawyers. He also said that many female lawyers became pregnant, and questioned whether they should do so on their law firms' dime. He asked the female students in my class what they would do if they became pregnant and about the impact of their pregnancies on their law firms. He also asked how they would take care of their children after those children are born.

These allegations could very well make their way to the Senate floor on Monday, as the Supreme Court nominee begins the first of his confirmation hearings. And in seeking a position in the nation's highest court, concerns about Gorsuch's ability to see all citizens — no matter their gender — as equal before the law certainly are hardly trivial.

But despite Gorsuch's troublesome views, Sisk wrote in a now-deleted Facebook post on Jan. 31, the day of the judge's nomination, that Gorsuch was still the best of President Donald Trump's options.

"[Gorsuch] does not support [The Family and Medical Leave Act of 1993], women as equal citizens, and values corporations above people," she wrote. "He's still better than the rest of the choices."