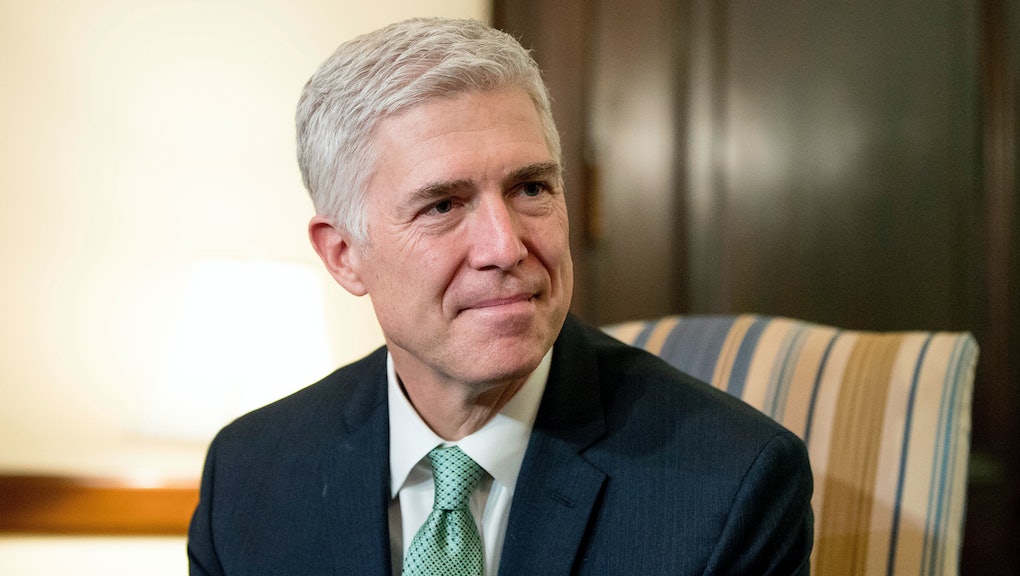 Gorsuch — a 10th Circuit Appeals Court judge — is broadly seen as a qualified nominee from a president who has come under fire for his attacks on the judiciary.

But Democrats — still smarting after Republicans refused to even hold a confirmation hearing for Merrick Garland, former President Barack Obama's nominee — object to Gorsuch, a conservative judicial originalist who has thus far declined to publicly criticize Trump's attacks on federal judges — though he apparently told Sen. Richard Blumenthall (D-Conn) in a private meeting that he found the attacks "disheartening" and "demoralizing."

Still, it isn't clear if Democrats will stand in the way of Gorsuch's nomination. Hearings begin with introductions on Monday and questioning throughout the week.

Mic will keep you updated throughout the confirmation hearing. All times are in Eastern.

Judge Neil Gorsuch struck a humble tone in his opening remarks Monday, praising the U.S. judiciary as one of "honest, black polyester."

"I am honored and humbled to be here," Gorsuch said. "If I am confirmed, I will do all my powers permit to be a faithful servant of the constitution and laws of this great nation."

Gorsuch used his remarks to thank his family and to acknowledge his judicial heroes, including Justices Anthony Kennedy and Antonin Scalia. Kennedy taught him judges can "disagree without being disagreeable," and Scalia taught him that "words matter," Gorsuch said.

Gorsuch also extolled the virtues of respect and consensus, saying, it's what they do "in the west." Gorsuch is from Colorado.

Toward the end of his remarks, he echoed — in less partisan terms — the criticism of "activist" judges leveled by Republican senators throughout the day, saying that "government by the people, for the people" would be at risk if judges try to legislate. He said that he does not pass judgment on the people before him, but on the law.

"A good judge can promise no more than that," Gorsuch said, "and a good judge should guarantee no less."

Sen. Richard Blumenthal demanded that Gorsuch rebuke Trump's "demeaning" attacks on the judiciary in public — not just in the privacy of his office and those of his colleagues.

He said those attacks were undermining the judiciary.

Sen. Ted Cruz offered a strong defense of Gorsuch and what he called "judicial humility."

Judges "do not make the law," Cruz said. "They apply it."

Cruz said the election was a choice between "originalist" and "activist" Supreme Court picks.

"The voters had a direct choice," Cruz said. "And in November the people spoke."

An Obama or Clinton appointment, according to Cruz, would have put "Scalia's legacy in great danger" and given "philosopher kings" the ability to rule over Americans' lives.

While Republicans continued to focus on Gorsuch's "merits," Democrats said it was impossible to evaluate Gorsuch without considering the unique challenges posed by the Trump administration.

Sen. Al Franken said the purpose of the hearings is to determine whether Gorsuch's interpretation of the constitution would protect minorities and working Americans and if Gorsuch will be part of the Trump administration's stated goal of "deconstructing the administrative state."

"I have concerns," Franken said.

Sen. Dick Durbin joined his Democratic colleagues in attacking the GOP for blocking the nomination of Merrick Garland and sharply criticized Gorsuch for his "cold" judicial opinions.

"Your nomination is part of a republican strategy to capture the judicial branch of our government," Durbin told Gorsuch.

Durbin said that, unlike Republicans, Democrats would consider Gorsuch based on his merits. But Durbin said he was concerned about a "pattern of dismissing workers and families" in Gorsuch's opinions, which he also described as "cold."

He said the "Robert's Court" has favored corporations over the American people and suggested Gorsuch would do the same if confirmed. He also called out Gorsuch for his role in a decision that allowed Hobby Lobby to "discriminate."

Republicans continue to celebrate Gorsuch as an "independent" justice, free of partisan influence, while Democrats continue to question his independence from the Trump administration.

Sen. Patrick Leahy, a Vermont Democrat, called the "extraordinary blockade" of Obama's Supreme Court nominee Merrick Garland "one of the greatest stains in the 200 year history of this committee" during his opening statement.

In contrast, he said he would "fairly evaluate" Gorsuch and that he had yet to decide whether or not he will vote to confirm him.

Leahy said he must be a "justice for all Americans" and an "independent check and balance" on the Trump administration — not a "surrogate" for the president who nominated him.

He also described Gorsuch's philosophy as being important, suggesting that his originalism is out of the mainstream and painting the nominee as potentially a Trump extremist.

Leahy said he was concerned that his views went "beyond a philosophy to an agenda."

He also said that the Senate "owes the president deference over his judicial nominees."

Some called that out as hypocritical, given the Republicans' block of Garland.

Democratic Sen. Dianne Feinstein took aim at "originalist" judicial philosophy in her opening statement at Gorsuch's confirmation hearing, saying it "severely limits the genius of what our Constitution upholds."

"I find this originalist judicial philosophy to be really troubling," Feinstein said. "I firmly believe the U.S. constitution is a living document intended to evolve as our country evolves."

Feinstein listed important issues the Supreme Court will take on, including gun control, climate change and abortion rights, and said she is concerned about how Gorsuch would rule on them.

"I am concerned when I hear that Mr. Gorsuch is a strict originalist," she said.

"There is no appointment more pivotal to the court than this one. This has a real world impact to all of us," she continued. "They must understand the court's decision has real world consequences."

"I am deeply disappointed," Feinstein said.

Republicans did not hold a confirmation hearing for Garland, who Obama nominated after the death of Scalia.

In his opening statement, Sen. Grassley said that judges aren't free to rewrite the Constitution and called for a justice who is "independent" and understands the separation of powers.

Congress passes laws, Grassley said, and judges are to follow it — regardless of their personal feelings on it.

The senator also took a shot at the Obama administration's "repeated abuses of one branch at the expense of the other two" in the case of legislation like Obamacare.

Grassley praised Gorsuch as an answer to such "damaging" abuses.

"I look forward to hearing more about your excellent record," Grassley said to Gorsuch.

The single most important feature of our Constitution, Grassley said, is "the design of the document itself."

"Scalia understood it better than anyone," Grassley said.

Gorsuch introduced his family — as well as several law clerks he has in attendance.

Gorsuch has arrived and is shaking hands with senators.

"Is it always like this?" he asked, smiling as cameras flashed.