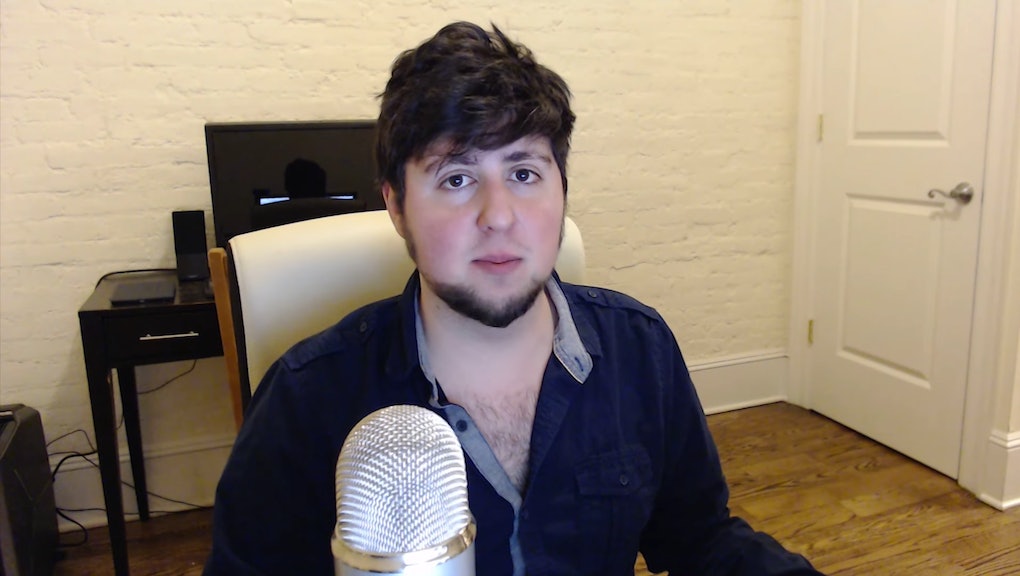 Jon "JonTron" Jafari, a popular YouTuber with over 3 million subscribers, recently posted a video in an attempt to walk back the rash of racist ideologies he's spouted in recent weeks.

The saga started when Iowa Rep. Steve King received a mountain of backlash for a xenophobic tweet categorizing nonwhite Americans as "somebody else's babies."

In the wake of the backlash against King, JonTron tweeted the following in support of King's comments:

JonTron then engaged in a debate on Twitch with another popular streamer, Steven "Destiny" Bonnell, in which he doubled down on his explicitly xenophobic stances on immigration and race. According to Gizmodo, in the debate, Jafari said that the U.S. didn't need immigrants from "incompatible" countries and claimed — without evidence — that wealthy black Americans are more prone to commit crimes than poor white people.

In Jafari's most recent video, he attempts to walk back some of these statements, admitting that he "wasn't prepared" for the "random" Twitch stream. Instead, he just exposes his ignorance even more.

In the video, titled "My Statement," JonTron cites a number of critical articles that went up in the wake of his Twitch stream — which he sarcastically calls "charitable" — as the reason for his new video.

"I understand that I wasn't prepared for a debate of this sort with these kinds of sensitive topics ... and I said a lot of things that could be misconstrued in all sorts of ways," JonTron says.

Here's JonTron's clarification about what he was actually trying to say in that initial debate:

I was trying to speak to the increasing tribalization of our culture. These days, we're taught to think in explicitly racial or ethnic categories, or in terms of gender or sexual orientation, and I think this in itself plays a big hand in what's gotten our country into the volatile state that it's in. The simple point I was trying to make is that it's hypocritical for those who see everything in terms of race to suddenly turn around and object when white people speak up in what they believe are the best interests of their race.

The things JonTron cites as examples of "racism" against white people are articles that deal with white privilege, institutional and internalized racism. For example, he brings up Mic's video "We All Have Racial Bias" as an example of this kind of anti-white rhetoric that he finds hypocritical, calling it "garbage."

Despite his anger toward what he considers racist rhetoric against white people, JonTron does acknowledge that black people have had "a raw deal," historically speaking — but then immediately couches it by saying discrimination "goes all ways."

JonTron still has some learning to do

Regardless of how much JonTron tries to clarify or walk back his statements, one thing is clear: He still has a fundamental misunderstanding of the reality that people of color face on a daily basis — and of the horrendous history of colonialism that Western societies have violently carried out for hundreds of years.

For example, in a recent tweet, he claimed that colonialism — a word used to describe the invasion and exploitation of one country at the hand of another —yielded a "net benefit."

Just to make absolutely clear, that claim is unequivocally false. For example: Britain's colonization of India destabilized the region and caused a famine that killed 3 million people.

At least JonTron himself seems to know he's not so great at weighing in on politics, too.

At one point in the video, he says, "As it became clear, I suck at debate."