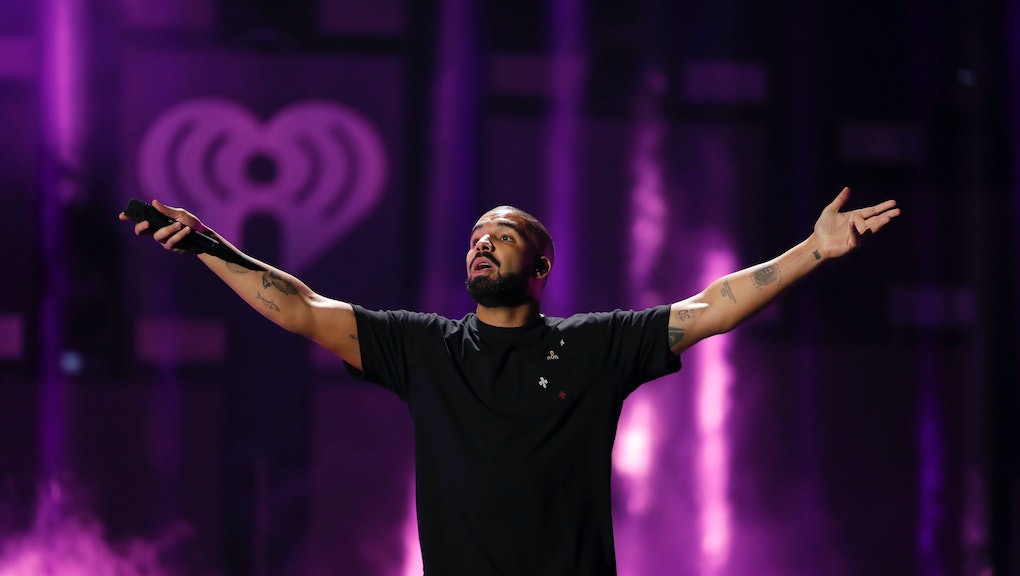 We should have known what Drake was up to when he broke into a strained Jamaican patois while accepting the award for favorite rap/hip-hop artist at the American Music Awards: "More chune for ya headtop, so watch how you speak my name, ya know?" he said. We should have known he would be leaving the 6 for his next project and going global.

That line is sampled throughout Drake's More Life, released Saturday via his Apple Music OVO Sound Radio show. It's a mission statement, a threat and an introduction to the new Drake, who for this playlist project attempts to style himself as Mr. Worldwide — Pitbull be damned. He acts as curator as much as creator, melting musical styles from Britain to Atlanta to Africa to Australia into his moody hip-hop.

Some mixes work better than others. Don't let him fool you: His patois is bad, and his British roadman impression will never sound as natural as it does for grime veteran Giggs, who appears on two tracks of the project. The best culture hopping moments are generally those where Drake cedes the bulk of the track to artists abroad, as when he gives Skepta the floor to exemplify grime's ideals on "Skepta's Interlude," or Quavo a turn to show the world how Atlanta rappers can body their kooky flute beats on the ironically titled "Portland."

The variety shows Drake to be a skilled curator, but it leaves his listener at a bit of a loss for who the Toronto rapper is creatively these days, or which cultural legacies are authentically his own. The answers are difficult to pin down, especially considering Drake's long history of riding the waves of rappers on the verge of their big breaks (see iLoveMakonnen, 21 Savage, Wizkid, Kodak Black, DRAM).

Below is a run down of all the cultural touchtones Drake's October Firm has melded to create More Life. There's something from nearly every corner of the globe, a sampling of nearly every form of black music stemming from the African diaspora, which is currently being reshaped again by pop's thirst for global styles.

Drake lends Hiatus Kaiyote, an Australian future soul duo, the privilege of opening his album, sampling singer Naomi "Nai Palm" Saalfield's divine vocal runs from "Building A Ladder." It's a curious inclusion, setting up the album as a "new release" for Drake to "ripple your sweet voice." He follows that lyric with his "more chune" line, seemingly showing off what his new, sweet voice sounds like.

Caribbean immigrants make up perhaps the largest non-European ethnic minority in Drake's native Canada, and have generally been one of the artist's favorite cultures to bite from. "Blem" offers the biggest nod to the islands, opening with Drake borrowing a favorite ad lib — "Unruly" — from one his frequent collaborators, Popcaan. The song takes its name from a piece of Jamaican slang popularized by one of dancehall's greats, Vybz Kartel — an artist Drake called one of his "biggest inspirations, like one of my favorite artists," in a 2016 Nardwuar interview. Listeners can judge whether Drake's appreciation of Jamaican music justifies his liberal — and possibly reckless — sampling of the country's culture.

To be fair, Atlanta runs hip-hop these days. Many of the big drops pay some level of homage to the city's trap styles that went fully mainstream in recent years. However, Drake has done more than most artists to make sure that his music feels like a natural extension of Atlanta's pioneering sounds. His collaboration with Future for What a Time to Be Alive and his "Versace" remix, which one could argue helped Migos launch into the stratosphere, were blatant plays to secure ATL street credentials. He also had an Atlanta artist, Quentin Miller, literally writing — or helping write — rhymes for him, which sparked the Meek Mill beef in 2015. Young Thug, Quavo and 2 Chainz all have significant features on the album, running lyrical clinics on how to trap like a real trendsetter.

South African artists Black Coffee and Bucie earn songwriting credits on the Afro-house ballad "Get It Together." The song is essentially a copy and paste of the two artists' "Supaman," swapping out the chorus for a new one that Drake and British crooner Jorja Smith sing together. Black Coffee is a strong proponent of globalizing South African house music, working to not have it viewed as its own subegenre, but as "music to compete on a global level ... where it blends in with the rest of the world," he explained to the Warehouse Project. Handing over your sound to a record-breaking global sound enthusiast like Drake is perhaps the absolute best way to get that done.

The track "Madiba Riddim" is also likely a reference to South African anti-apartheid revolutionary Nelson Mandela, who was frequently referred to by his clan name "Madiba" out of respect and affection. "Riddim," on the other hand, is even more Jamaican patois "for your headtop."