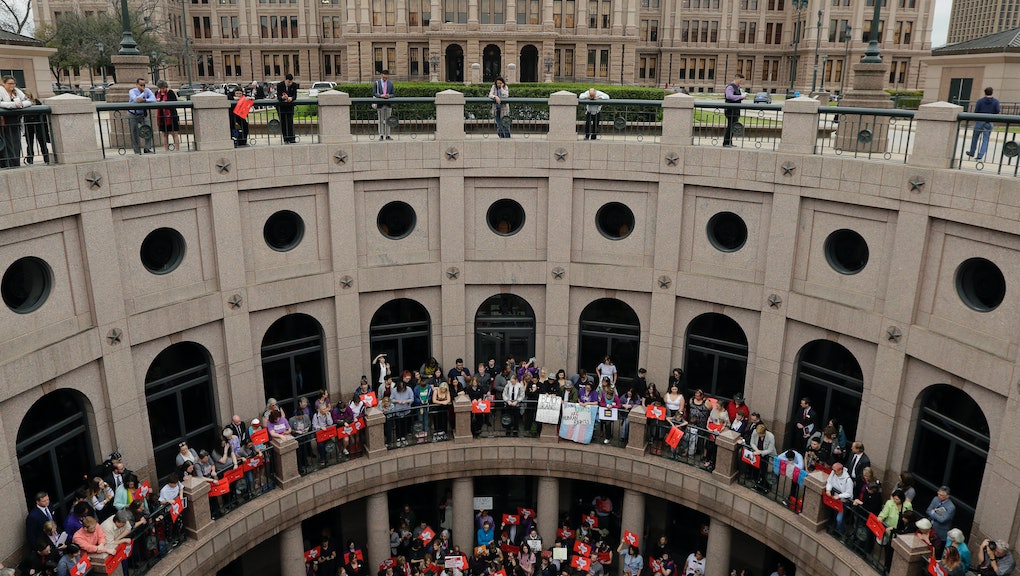 Protesters in the Texas Capitol made a silent statement on Monday when they showed up to the Senate chambers dressed in the red robes and white bonnets, iconic imagery from author Margaret Atwood's feminist dystopian novel The Handmaid's Tale.

According to the Huffington Post, the women were protesting multiple anti-abortion rights bills, one of which was Senate Bill 415, legislation that bans what lawmakers are referring to as "dismemberment abortion" — otherwise known as "dilation and evacuation — a common second trimester abortion procedure.

The bill passed the Senate and is now headed to the house. If it becomes law, anyone who performs the procedure would be charged with a state felony and face jail time.

The Senate also voted to advance another bill, which gives doctors an incentive to withhold information from their patients, especially in instances where they suspect a pregnant person may choose to have an abortion due to fetal anomalies.

Sen. Jose Rodriguez told the Texas Tribune the legislation effectively restricts "woman's right to exercise her choice about what she's going to do in the case of serious defects to the fetus."

Along with other dystopian classics like 1984, Atwood's The Handmaid's Tale seems to have taken on new relevance following President Donald Trump's election.

In Atwood's imagined future, women have been stripped of all autonomy and reduced to "walking wombs" whose sole purpose is to produce children for the state. Those women who can't become pregnant are relegated to the status of "Unwomen," who spend their remaining days cleaning toxic waste.

Sure — it sounds far off. But with an administration bent on defunding clinics that provide abortions, and eventually overturning Roe v. Wade, many people have noticed stunning parallels.

"We never wanted the show to be this relevant," Moss told Entertainment Weekly in December, referencing the country's political climate.

But if Moss' character could say one thing to Monday's protesters it would likely be this: Nolite te bastardes carborundorum.