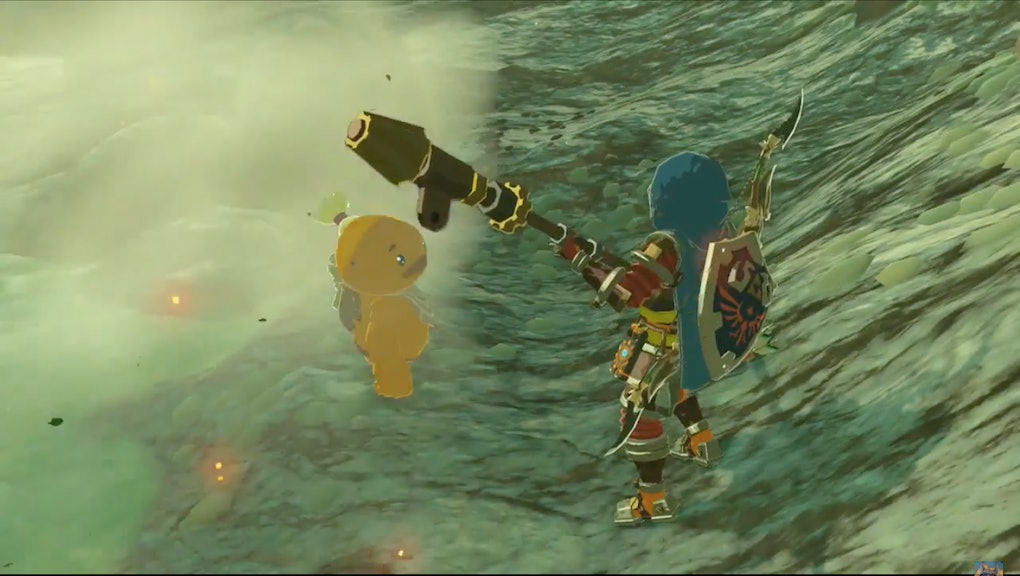 In Legend of Zelda: Breath of the Wild, you'll be given a lot of side quests. Some are intense riddle epics; some let you help a disaffected carpenter build a whole town and get married; and some allow you to help an honest, hard-working fishman named Fronk get his wife back after she goes missing. Then there's "Death Mountain's Secret."

If you happen to be hanging out in the Goron Hot Springs near the Eldin Tower, you'll find a young Goron named Dugby who has a little quest for you if you're willing to parse some gibberish. Players have had some difficulty figuring it out, so we're here to help your inner completionist find peace — and a good weapon — in the "Death Mountain's Secret" side quest.

According to a YouTube walkthrough by Caticulated, you'll find a small Goron named Dugby lounging in the Goron Hot Springs along the path heading southwest from the Bridge of Eldin. It's important that you speak to Dugby while he's in the hot springs, or else he won't give you the quest. Once you speak to him in the hot springs, he'll attempt to explain that he's hidden something on Death Mountain. If you find it, it's yours.

Unfortunately, because he's so small, he's gurgling his entire explanation because his face is underwater. Just respond "Nonsense" both times the prompt appears and you'll start the quest.

To find Dugby's secret stash, head east to the mountain peak and scale it, avoiding the fire keese and chameleon-like lizalfos as you do so. If you're able to, take a breather in the area near the mine carts before making your way to the peak itself, since it's going to take up a lot of stamina.

Once you're on top of the mountain, head around to the south side of a small peak, where you should find a wall you can bomb. Do so, and you'll find a Drillshaft that updates your quest log when you pick it up. Take it back to Dugby and he'll ask to verify it. Confirm that it's probably the one he hid and then he'll say you can keep it. It's a little confusing, since he's the one who told you about it, but it's best not to argue.

The Drillshaft itself is a weapon that does exceptionally well when mining ore deposits, so you should keep it around for as long as you can. It also respawns during the Blood Moon, so don't get too worried if you break yours.

Find out all there is to know about Zelda: Breath of the Wild, including what to expect from the Wii U version, how to preserve your items, how to beat bosses like the Stone Talus, Lynel, the Guardians and the Hinox, the best recipes for Link, how to take on the game's shrines and our coverage of the game's outfits, like the Climbing Set, the two sets of heat resistance armor you can find and how to dress Link in the classic green tunic. You'll also want to find out where all the great fairies are in the game, all available stables, how to use amiibo with your version of Zelda and how to increase your health, stamina and weapon slots.