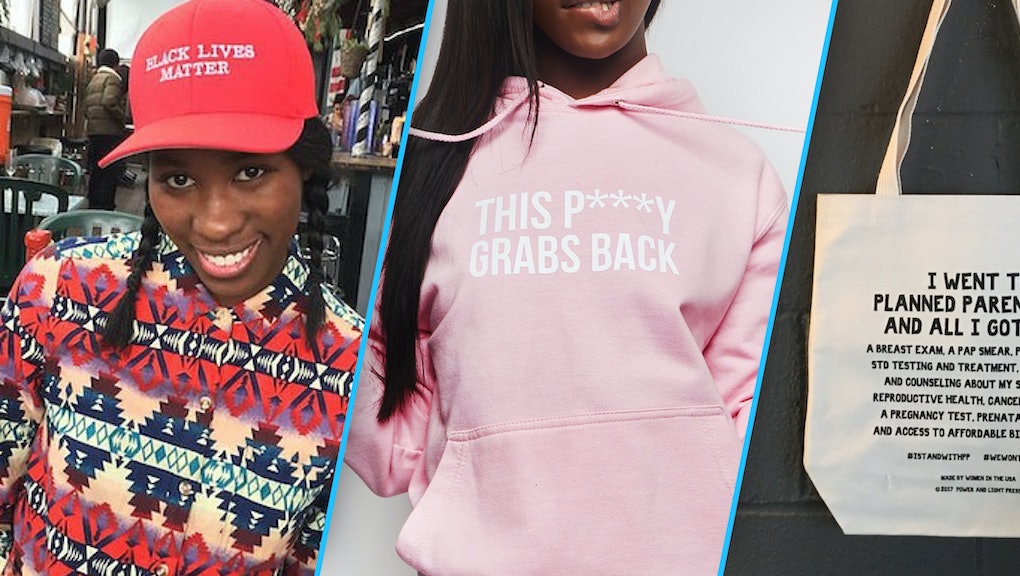 50 sartorial ways to resist Donald Trump and his presidency

At this point, it feels like every person on earth has an opinion on Donald Trump.

From his hair, to his "tan," to his bigotry, to his inability to stay off Twitter, to the fact that he's actually president of the United States, dude is divisive and, accordingly, fashion has gotten keen to this.

Plenty of people, judging by his approval rating alone, disapprove of him and want to resist his presidency. So, rather fittingly, they're looking to clothes to do just that.

From T-shirts to tote bags to tank tops to bomber jackets to baseball hats, people are looking to fashion to show what they believe or don't, whether it be that women should indeed be nasty, or that men shouldn't grab women by — well, anything.

So we've gathered up 50 items that help show everyone within a three-yard radius of you that you're resisting — and not giving up any time soon.

2. Donald Trump's head made out of all the ways Jezebel has described him T-shirt, Jezebel, $23.99

If you want to remind people to resist:

If you feel like talking about the travel ban:

If you want to remind everyone about how Donald Trump talks about women:

You can read more about this brand here.

If you feel like standing up for Elizabeth Warren and other silenced women:

If you wanna stand up for the nasty women — and future female presidents:

If you just can't let go of what you once had:

You can learn more about this brand here.

43. "I Stand with Planned Parenthood" tote, Power and Light Press, $15

If you feel like fucking with something Trump loves: