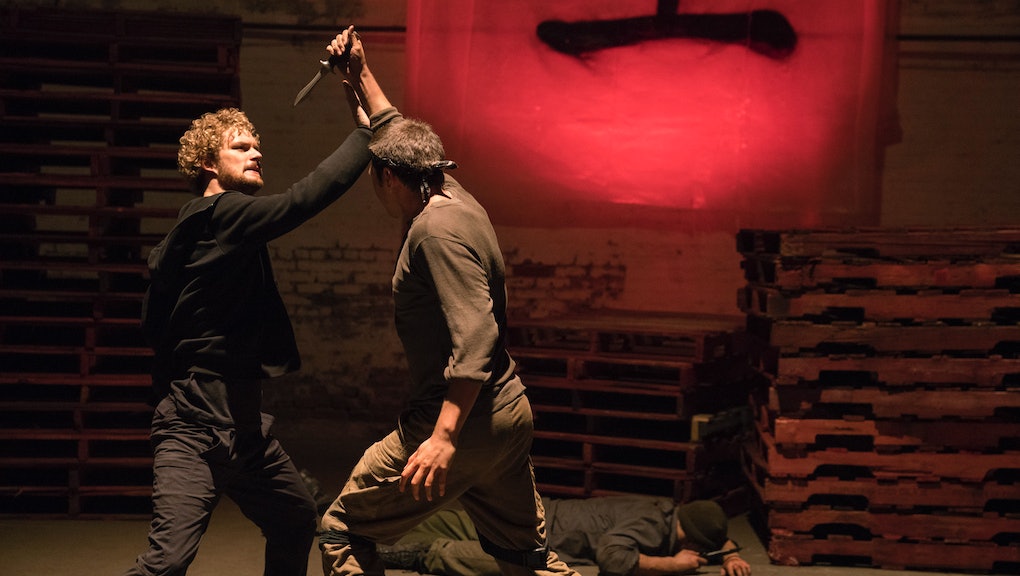 How Marvel and Netflix can fix their ‘Iron Fist’ problem

Let's cut to the chase: Iron Fist isn't very good. The degree to which critics have panned Marvel's latest Netflix series have varied — I have somehow written one of the more positive of the negative reviews, which strayed away from calling it "laughably bad" or an "unremarkable bummer." But make no mistake, it's easily the worst Marvel series to come from the streaming service, following three successes in Daredevil, Jessica Jones and Luke Cage.

The problem is, Netflix can't simply cancel the series after one season and forget that the problematic white savior narrative of Danny Rand made it to screen. That's because Danny will appear in one more series in 2017, when Netflix debuts The Defenders, the Avengers-like collective featuring Daredevil, Jessica Jones, Luke Cage — and yes, Danny Rand. Afterward? Who knows. But the fact that Netflix is moving forward with future seasons of its other Marvel shows means we could get more Iron Fist. To put it another way: Netflix just spent several years building up to The Defenders, and we imagine it won't stop with one season. That would be akin to Marvel setting up The Avengers without moving forward with any of its sequels.

But if we're going to be stuck with Iron Fist for the foreseeable future, is there any way Marvel and Netflix can fix the series? Here's four options they should consider.

Danny and Luke are going to share the screen in The Defenders, which would be a great opportunity for Netflix to expand on the character's amazing comic book bromance. They teamed up for a popular "Heroes for Hire" series, which basically amounted to both characters fighting crime and taking odd jobs in the city. And seriously, these two really grow to like each other. In Power Man and Iron First #1, Luke and Jessica Jones have a daughter, whom they name Danielle because it's the closest to Danny, Luke's BFF.

As a show, Luke Cage is considerably stronger than Iron Fist, and one of the reasons the former works so well is that it's rooted in Harlem's history and culture. While throwing Danny in the mix could be detrimental to the series, a Luke-Danny bromance could do something Iron Fist wasn't able to achieve in its 13 episodes: Make Danny Rand remotely likable.

For a show about a superhero who gains his power by defeating a mystical dragon named Shou-Lao, Iron Fist was much more interested in the corporate politics of Rand Enterprises. That was, in a word, perplexing.

It's one thing if the Marvel Cinematic Universe was only focused on the gritty realism of a Jessica Jones — or hell, even a Black Widow movie if Marvel ever got their act together — but this is a world that's already introduced us to the psychedelic sphere of Doctor Strange. K'un-Lun and dragons doesn't veer too far away from that.

Moreover, The Defenders' main villain is set up to be the Hand, a shadowy organization that can bring people back to life — such as Iron Fist's Harold Meachum — and whose members can apparently live for centuries. At one point, Madame Gao casually references that much of her time in the 17th century was spent being interrogated. So, again, it's not like Marvel isn't afraid to delve into its more magical elements, and that's part of what makes Iron Fist an entertaining superhero. That the entire season skirted around the fact that Danny had to fight a dragon to gain his powers — yet spent hours on the financial future of his multibillion dollar company — was some remarkable oversight.

If we don't see Danny fight a CGI dragon in a second season, I'm punching him myself.

Finn Jones, who plays the series' eponymous hero, had some spectacularly bad press ahead of Iron Fist's premiere. He tweeted about the importance of representation, which people called him out on for playing a whitewashed superhero. He tried to argue back; he sounded petty, and he briefly deleted his Twitter account.

Then, once the negative reviews started pouring in, Jones went with the tried-and-true excuse that Iron Fist is intended for fans instead of critics. This was, as io9 described in a rebuke of Jones' claims, an insult to fans by intimating that they would hold the series to lower standards.

But wait, there's more. Jones also believes that people are channeling their anger toward Iron Fist because Danny Rand is a white billionaire, like America's much-maligned president, Donald Trump. Apparently, Jones has never heard of Bruce Wayne, a white billionaire superhero who's so popular there's a critically acclaimed Lego movie about him in theaters.

It would be in everyone's best interest if Jones reflected on these thoughts — perhaps in the spirit of his character, with some meditation — and kept them to himself.

Give Colleen Wing her spinoff

Colleen Wing is already a hero in my mind for persevering through Danny's mansplaining of martial arts to... someone who has her own dojo. She's a much more likable character, and Jessica Henwick gives her all to the role. It's not her fault the writing for Colleen — and everyone on the show, really — is terrible.

Colleen's brief foray into cage-fighting for rent money, under the name Daughter of the Dragon, was a fun Easter egg for the detective agency Colleen sets up with Luke Cage character Misty Knight in the comics, Daughters of the Dragon. Misty and Colleen should meet on-screen in The Defenders. If Netflix were to explore the bromance between Luke and Danny, they'd be wise to give the same space to the bond between Misty and Colleen — who deserve their own spinoff series.

Not only could it prove to be entertaining, but the power of a Marvel show with two women of color leads can't be underestimated. Jessica Jones and Luke Cage were both lauded highly for their inclusive storytelling; such a spinoff could be another groundbreaking milestone for the superhero genre. It certainly wouldn't undo the damage Iron Fist did, but it's a start.