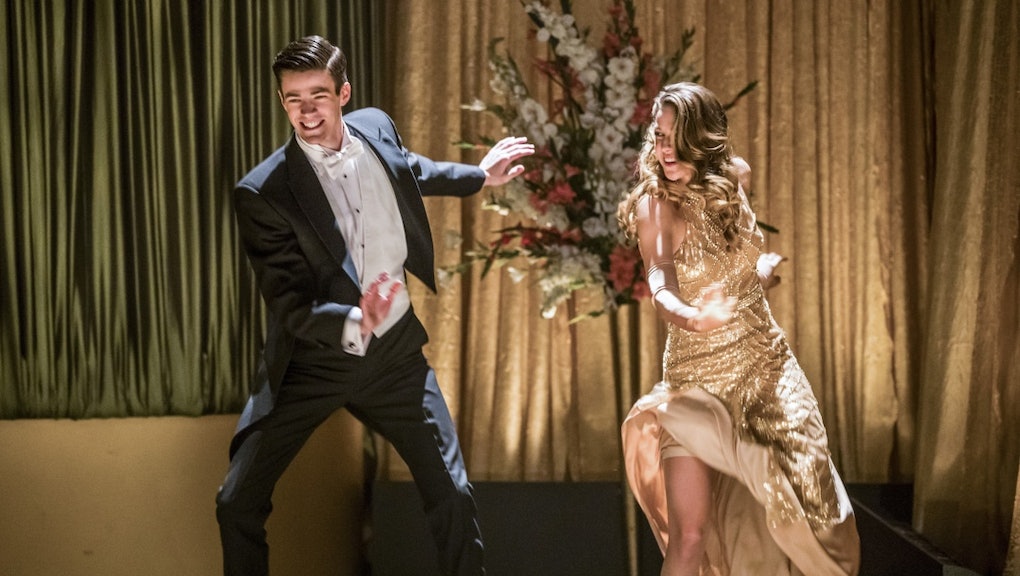 ‘The Flash’ season 3, episode 17 is a musical, gleeful smash with a surprise ending

After months of teasing, The Flash and Supergirl finally came together for their big musical crossover episode, "Duet" — and it was entirely worth the wait. Darren Criss guest stars as the Music Meister, an inexplicably powerful alien, who is intent on teaching Barry and Kara a lesson about love. How? By trapping them inside a deadly movie musical starring bizarro versions of all of their friends and loved ones. To survive, they need to "follow the script," which luckily for us, includes lots of singing and dancing and even more heart.

How Supergirl gets to Central City

The story of "Duet" technically starts with Monday night's Supergirl. The Music Meister visits Kara and hypnotizes her into a coma. He warns them that he's looking for "the fastest man alive" and then escapes via breach. A little bit of background you need to know: Kara is currently on the outs with her maybe-boyfriend Mon-El after he lied to her about who he really was for nine months.

Episode 17 of season three picks up with Barry as a child. We learn that he and his mom used to love watching Singin' in the Rain. Flash forward to present day: Barry is depressed after his breakup with Iris and is taking solace in Singin' in the Rain — until he's interrupted by a call from HR. The breach is open; Mon-El and J'Onn emerge with a knocked-out Kara. They warn that an alien prisoner escaped, put her in the coma and is looking for "the fastest man alive." Not moments later, they see the Music Meister on a security camera in STAR Labs.

Barry and Wally go to confront the Meister, who is not only super fast and super strong, but mysteriously knows their real names and almost everything about them. The Meister explains that he wants to teach them all a lesson. He knocks out Barry just like he did Kara.

That's when things get interesting. Barry wakes up inside a super swanky 1940s-style night club. Kara is on stage in a sparkly gown singing "Moon River." They're both very confused. Once she's done singing, they guess they've been sent to some parallel dimension or elaborate delusion by the Meister and need to find a way out.

Indeed, as the Music Meister soon explains, he has trapped them inside a musical. Why a musical? Because it's what they both loved as kids. Kara would watch The Wizard of Oz with her adopted Earth family, while Barry watched Singin' in the Rain. The Meister confesses that their dream could have been anything, and they're lucky it's not a war drama or a space opera. He tells them in order to escape they need to "follow the script" and reach the end of the plot. Also, if they die in the musical, they die in real life. The Meister tops it all off with a big ensemble production number of "Put a Little Love in Your Heart."

Like The Wizard of Oz, the musical world is populated by bizarro versions of the people in Barry and Kara's lives. Show creator Greg Berlanti brilliantly called up a wealth of performers from the Arrowverse with vocal chops. Arrow's Malcolm Merlyn is knife-happy night club owner Cutter Moran. Mon-El has been repurposed to be Moran's son, Tommy Moran. Cisco is now Pablo, a bartender with dreams of stardom. Supergirl's Winn Schott is Grady, the piano player. Joe is a gangster named Digsy Voss and is married to Legends of Tomorrow's Dr. Martin Stein. Iris is Millie, Digsy's daughter. Barry and Kara work at Moran's night club as singers.

As soon as they get their wits about them, Barry and Kara are knocked out and taken hostage by Digsy. He explains that Millie has been missing. They offer to go find her. Pablo takes Barry and Kara to Millie's apartment, but when they go in, they see that Tommy and Millie (Mon-El and Iris) are kissing! Two kids from rival gangs are in love. Barry points out it's just like West Side Story, but Kara prefers The Fantasticks! In order to move the plot forward Barry and Kara persuade the couple to come clean to their mobster dads. Tommy and Millie agree.

Back at STAR Labs, Kara and Barry's bodies are being drained of their powers. It turns out the Meister is stealing their abilities. He goes to rob a bank — because that's what all bad guys do apparently, even all-powerful interdimensional aliens. Wally, Cisco and J'Onn (now transformed into the Martian Manhunter) go to stop him. Through some clever vibing, they're able to knock out the Music Meister and lock him up.

Cut back to musical world, Millie and Tommy profess their love to their dads. Digsy, Stein and Moran aren't on board. Barry explains to Digsy and Stein that they should accept the love their children have for each other no matter the risk. Kara explains to Moran that he should listen to his son and hear him out. Like Dorothy learning the answer was with her all along, Barry and Kara are teaching themselves the lessons they need to learn.

The dads then come around and sing "More I Cannot Wish You" from Guys and Dolls to their children. It's a really nice moment until we learn that the dads were all faking it. Once the kids are gone, Digsy and Moran confess they're going to war.

Meanwhile, the real Iris and Mon-El go to confront the Music Meister about how to stop all of this. The Meister cryptically reveals that the two of them will have to save Barry and Kara. They have the power, but he can't reveal how they can do it. The Music Meister is not a cooperative guy.

In dream land, Barry and Kara sing and tap to an original song, "Super Friend." This was the one written by Crazy Ex-Girlfriend's Rachel Bloom. It's witty and self-referential, like all the songs on her show. But soon after, a shootout breaks out in the alley between Digsy and Moran. Barry and Kara go to help and both end up getting shot.

Their real bodies are crashing. Iris thinks quickly and asks Cisco to vibe her and Mon-El into the dream world. Before Kara and Barry bleed out on the pavement, Iris and Mon-El show up to save them. Kara forgives Mon-El. Barry and Iris say "I love you." The two couples kiss and all four are transported safely back to STAR Labs. Everyone's fine!

The Music Meister walks in and explains that he trapped them in the musical to teach them a lesson. He saw two people with two broken hearts. The lesson was love. "Love is about letting yourself be saved," he explains. He reprises a couple lines of "Put a Little Love in Your Heart" and then disappears.

Proposal round two in episode 17

The singing isn't over yet though. The episode ends with Barry and Iris in their apartment, unsure of where their relationship goes from here. Barry then sings a beautiful new song to Iris, "All I want to do is come running home to you." Barry pulls out the ring and proposes again, this time with no ulterior motive. Iris says yes. Love wins the day.

It was nice to escape the Savitar drama for an episode and focus on relationships. Darren Criss' Music Meister was compelling and mischievous. Let's get a spin-off of him traveling the multiverse and teaching people lessons via genre simulations. Next week, The Flash is back on track with a new villian Abra Kadabra, who may reveal Savitar's true identity.