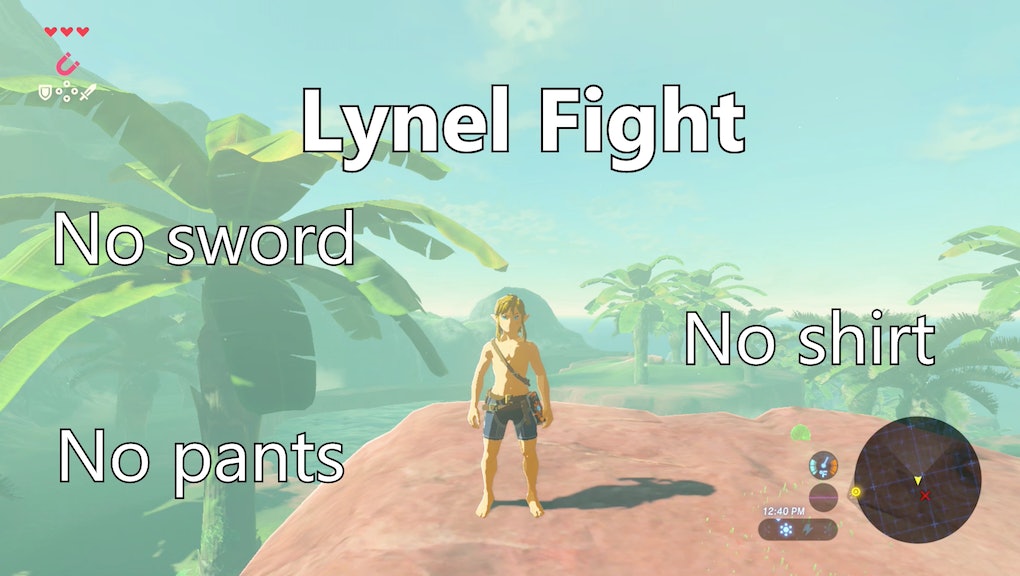 How to beat Lynel in 'Zelda: Breath of the Wild' naked and without any weapons

In Legend of Zelda: Breath of the Wild, beating mini-bosses like Stone Talus and Lynel doesn't come easy, but with enough practice you can figure out their attack patterns and take them on. One player even figured out how beat Lynel while naked — or at least as naked as the game will let you be.

We're not joking. This really happened and there's video evidence to prove it.

Removing all armor in Zelda: Breath of the Wild greatly reduces your defense, while taking away weapons clearly removes your main method of attack. But some players are so bold they can take on a Lynel without needing either. DeliciousTea Gaming is one such player.

Zelda: Breath of the Wild: How to beat Lynel naked

Start out by removing all your armor and weapons. Instead of swords, axes or lances, your main method of offense will be a metal boulder. Bring this giant rock with you to the pseudo-arena, where you'll face off against Lynel.

After picking a fight with the centaur, you can levitate the rock using your magnesis rune and push it into Lynel to slowly take away his health. Just make sure to drop that rock every once in a while so you can dodge the beast's attacks powerful attacks.

Interestingly DeliciousTea Gaming's video also throws no healing in the mix and goes into the battle with just three measly heart containers. That means you can replicate these results fairly early in the game.

We do take issue with DeliciousTea's use of their shield, which seems to go against the whole no weapons concept. Using a shield definitely makes the battle easier, and there are a few moments in the video where if Link didn't have the shield, he'd be toast.

We won't discredit the video since it remains a very impressive accomplishment, but let's just say we're looking for part two where even the shield is unequipped.

Find out all there is to know about Zelda: Breath of the Wild, including how to preserve your items, how to beat bosses like the Stone Talus and Lynel, the best recipes for Link and how to take on the game's shrines. If you're wondering where all the people of color in Zelda are we've got you covered there too. If you're looking to snag a giant horse with little stamina, here's you accomplish that. You'll also want to find out where all the great fairies are in the game, how to use amiibo with your version of Zelda and what went into making Breath of the Wild.