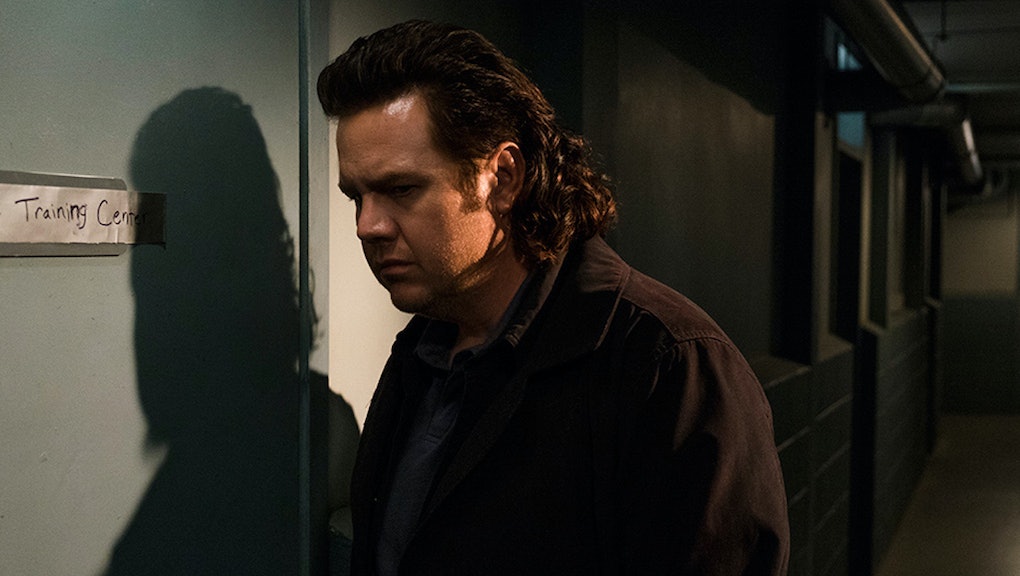 So many things happen in the 15th episode of The Walking Dead's seventh season, "Something They Need," that it's actually a bit jarring. It's a complete tonal shift from episodes 12 and 14, which stalled Rick finding out about Oceanside's arsenal of weapons and Sasha's failed assassination of Negan, respectively.

In a perfect Walking Dead world, we could have episodes that find a middle ground — something like episode 13, in which the Kingdom decides to fight back, and Morgan has a devastating setback. This week's episode doesn't really hit that sweet spot. It occasionally feels like an aggressive info dump, which is particularly surprising because AMC didn't give it an extended runtime, something they've been generous about for much of the season.

"Something They Need" focuses on three separate communities — another rarity, given season seven's propensity to have entire episodes hone in on one group — and each one moves the story forward for what should be a momentous season finale.

Now that Rick knows about the existence of Oceanside, The Walking Dead wastes no time in placing all the Alexandrians at the community for a raid of their arsenal. Tara is harboring some guilt over the fact that she broke her promise to Cyndie, who saved her life in exchange for Tara keeping the community a secret from her group. Alas, she's there to try and convince Oceanside's leader Natania that taking the guns and, by extension, joining Alexandria, is the best course of action against the Saviors.

She tells Natania that they don't want to take the weapons by force, though Natania's barely given any time to consider the offer before Rick and everyone else sets off some explosives outside of the camp. Nobody's hurt, and they've gathered up the members of Oceanside to one spot. At this point, it's worth noting that Daryl is helping the group with this raid, which means whomever Rosita saw at the end of last week's episode outside the Sanctuary was someone else with a crossbow. Hmm, who could that be?

While the other members of Oceanside seem ambivalent, and perhaps even enticed by Alexandria's rebellion against the Saviors (remember: Negan killed all the group's males over the age of 10), Natania isn't having any of this shit. She turns the tables on Tara, points a gun at her head and threatens to kill her if Rick and everyone else don't leave Oceanside without the guns. The faceoff is cut short, however, when Cyndie whacks Natania over the head and a horde of zombies approaches.

Rick quickly unties some of Oceanside's members, who work together with them in fending off and killing all the zombies without anyone getting hurt. Just like that, Oceanside is willing to give up their guns — Tara does promise to return them after the fight against the Saviors — but since they don't unanimously agree to take on the Saviors, none of them join Alexandria. While there's something to be said in just how absurd it was for Oceanside to give up their weapons so easily sans a defiant Natania, it's just a relief to see The Walking Dead moving forward from one of its most stagnant subplots.

Meanwhile, at the Hilltop, we get our umpteenth reminder that Maggie is an awesome leader when she helps an unnamed Hilltop member (Hilltopper?) plant crops. She then makes her way just outside the community's walls to replant a berry tree, and Gregory follows her. He offers a makeshift truce between the two, as they haven't been on the best terms since Hilltop was introduced in the show — and to be clear, the onus is on Gregory, who is a sexist pile of garbage.

There's a brief moment when Maggie asks him to be lookout while she uproots the small berry tree that he considers stabbing her from behind — foreboding! He changes his tune when a zombie shows up; he claims he's killed them before and wants to protect a "pregnant lady." Unsurprisingly, Gregory chickens out and Maggie quickly dispatches said zombie and a second that attacked him.

Emasculating for Gregory? Definitely, and it doesn't help matters when a small group of Hilltoppers walk by and see the whole thing go down. Later, in his office, Gregory brings out a map of Virginia and tells one of his men that he's planning a trip. Presumably, this is Gregory taking up Simon on his offer to come to the Sanctuary if he's having any issues keeping Hilltop in check, so fans should expect Gregory to make it to the Sanctuary in the season finale. If Gregory does end up surviving Negan's wrath — which is questionable, since Negan dislikes cowards in favor of Daryl Dixon-types that try to punch him in the face — he'll likely rat out Maggie and Daryl ahead of Rick's rebellion.

In other words, Gregory probably won't last much longer in the show, regardless of the outcome.

This shouldn't come as a surprise, what with Sonequa Martin-Green nabbing a lead role in CBS' new Star Trek series and Jeffrey Dean Morgan confirmed to return to The Walking Dead for season eight: Sasha's assassination attempt didn't go as planned.

She's a prisoner at the Sanctuary when we first see her in the episode, when she asks for water from a Savior named David. But David begins touching Sasha without her consent, to which she satisfyingly head-butts him, knocking him over.

David rips her shirt and begins unbuckling his belt, but before he's able to go any further, Negan enters the room and intervenes. While the show frames this as a moment of heroism from its big bad — he stabs the would-be rapist through the neck without any hesitation — Negan's own complicated history with women makes this moment less triumphant than The Walking Dead thinks it is.

He's also there to offer Sasha a similar deal to Daryl's (except this time she doesn't have to listen to "Easy Street"), where she can choose to join the Saviors. Eugene's happy with his arrangement at the Sanctuary, though when he tries to tell Sasha about that, she reacts with some expected revulsion. She does try and trick Eugene into providing a weapon for her — she frames it as an attempt to end her own life before Negan forces her hand, when in reality she's just trying to get her hands on something again. Unfortunately, he provides her with a poison pill — the one he refuses to give to some of Negan's "wives" earlier in the season.

While some fans held out hope that Eugene's obedience to Negan and the Saviors was part of an elaborate ruse, "Something They Need" all but confirms his heel turn is legit. Negan finds out that Rick's trying to rebel, and Sasha sure as hell didn't tell him. It's a good thing Rick just got all their weapons from Oceanside. They might need them sooner than they think.

When Rick and co. return to Alexandria with their weapons from Oceanside, they're surprised to see Rosita opening the gate for them. She's back — Sasha isn't — but Rosita says she didn't come back alone.

It turns out the mystery man who saw her outside the Sanctuary in the previous episode was none other than Dwight, Negan's enigmatic right-hand man. As in the comics, Dwight is in Alexandria because he wants to help them defeat Negan. I was wondering if the series was still going to go through with this, because they were quite convincing in making Dwight extremely unlikeable.

But here we are. With one more episode this season, Alexandria has the weapons they need; the Scavengers, the Kingdom and Hilltop are by their side; Negan's found out about Rick's plan, with Sasha as his prisoner, and Gregory is poised to betray Maggie. It took a while to get here, with some excruciating stall tactics in the previous weeks, but The Walking Dead has set up an epic, sprawling finale we're really looking forward to. And let us pre-emptively say: RIP, Sasha.