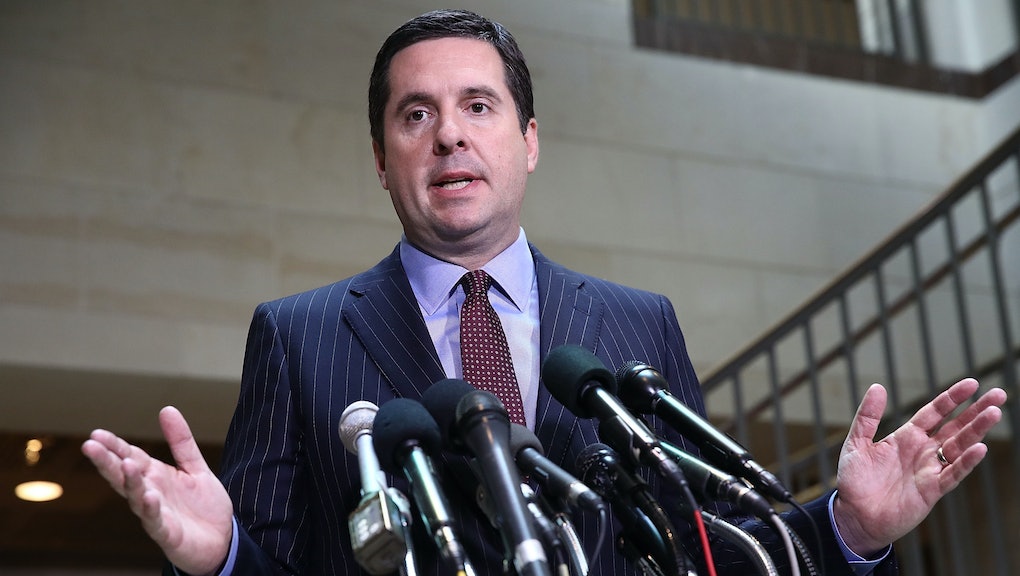 Devin Nunes muddies the water on Trump's wiretapping claim, much to Trump's delight

Nunes held a news conference Wednesday on Capitol Hill, where he divulged information that Trump administration officials had some communications intercepted during the transition period between Trump's election and his inauguration. Nunes provided few other details about the communications, but said the interceptions were likely legal, though disturbing to him nonetheless.

But Nunes' revelation gave Trump exactly what he wanted. Shortly after Nunes made his revelations public, Trump came out to say he feels "somewhat" vindicated on his wiretapping claim.

But Nunes' behavior raises many questions — both about what information Nunes even has, and whether he should have divulged it in the first place.

First, none of what Nunes said really made sense. He said the intelligence Trump transition officials appeared in was "legal" and "incidental," yet then Nunes called it "inappropriate."

It's all as confusing as it sounds.

Even more suspect is that Nunes didn't divulge his findings to the ranking Democrat on the House Intelligence Committee, Adam Schiff, before running to the media and then Trump himself.

It's possible Schiff could have had a different interpretation of Nunes' murky findings, and punched holes in Nunes' revelations before Trump could come out to declare himself vindicated on the wiretapping claims.

"The chairman will have to decide whether he is chairman of an independent investigation or if he's going to act as a surrogate of the White House," Schiff said.

Even worse is that Nunes' revelations look to be completely hypocritical, given Nunes' concern with the leaking of classified information.

During that hearing, Comey revealed an active FBI investigation into the Trump campaign's possible collusion with Russia.

But Nunes was more concerned about who leaked information about the Trump campaign's Russian ties than with the FBI.

Even worse for Trump is that Nunes is keeping the baseless wiretapping claims in the news.

He and White House press secretary Sean Spicer are likely to get more and more questions about the half-baked information Nunes unleashed Wednesday.