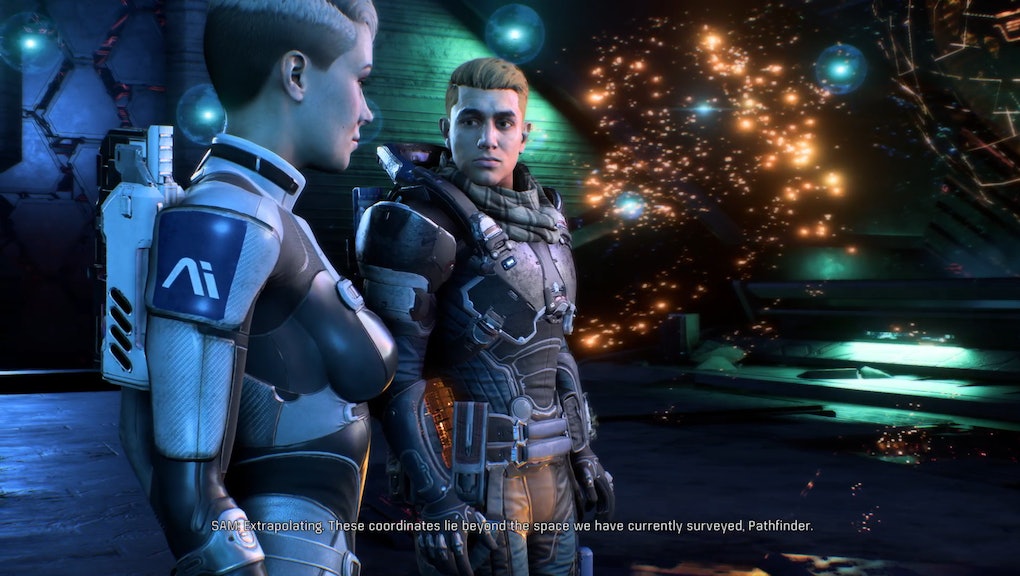 'Mass Effect: Andromeda' Deluxe Edition Items: Here's everything you get for an extra $10

If you're thinking about picking up Mass Effect: Andromeda, you're probably wondering whether it's worth shelling out some extra money for the deluxe edition. For some reason, it's incredibly difficult to actually find images of these items on retailers' websites — which makes it tricky to justify spending that extra dough.

Don't worry, we're here to clear up the confusion. Here are images of every single item you'll get in the deluxe edition of Mass Effect: Andromeda.

When you're in peaceful, noncombat environments, Ryder will wear street clothes. You have three different outfits to choose from in the regular version of the game, but the deluxe edition will include the casual pathfinder outfit, which is basically just a futuristic looking hoodie.

You can customize the colors of these casual outfits aboard the Tempest. We've opted for a more understated, earth-tone look here.

The deluxe edition also includes a full set of scavenger armor. It looks more cloth-like and lightweight than some other armor sets, and it includes a pretty slick looking scarf. By default, it has a black and purple color scheme, but you can customize the colors to look however you want. The following image shows it in a dark gray and blue color scheme.

The armor's not just for looks, either. It reduces Ryder's weapon weight by 15%, increases his max ammo capacity by 15% and gives him a 10% bonus to his sell prices at merchants.

The scavenger armor also includes a helmet, but we've opted to hide it so you can scope Ryder's strong cheekbones at all times. Here's what it looks like:

The helmet reduces Ryder's weapon weight by 10% and grants a 10% bonus to ammo capacity. Yes, that's in addition to the bonuses the scavenger armor provides.

The deluxe edition also includes a pyjak pet. This little guy doesn't really do anything, per se, but he'll hang around your ship. He kinda looks like an ant-eater crossed with a monkey?

Honestly, the best part of the pyjak pet is the email you get in Ryder's inbox with a killer Gremlins reference.

You'll also get a full set of weapons — one pistol, one assault rifle, one shotgun and one sniper rifle. Here's what they look like. Their stats are on the right side of each screenshot.

Mass Effect: Andromeda deluxe: Miscellaneous items and how to claim them

The other items you'll get are a digital download for the Mass Effect: Andromeda soundtrack and special pack of random items for the multiplayer mode.

To claim all of the above items, just visit the Pathfinder's quarters on the Tempest — located on the lower level near the rest of the crew quarters — and you should be able to interact with a point on the desk that'll transfer all the items to your inventory.