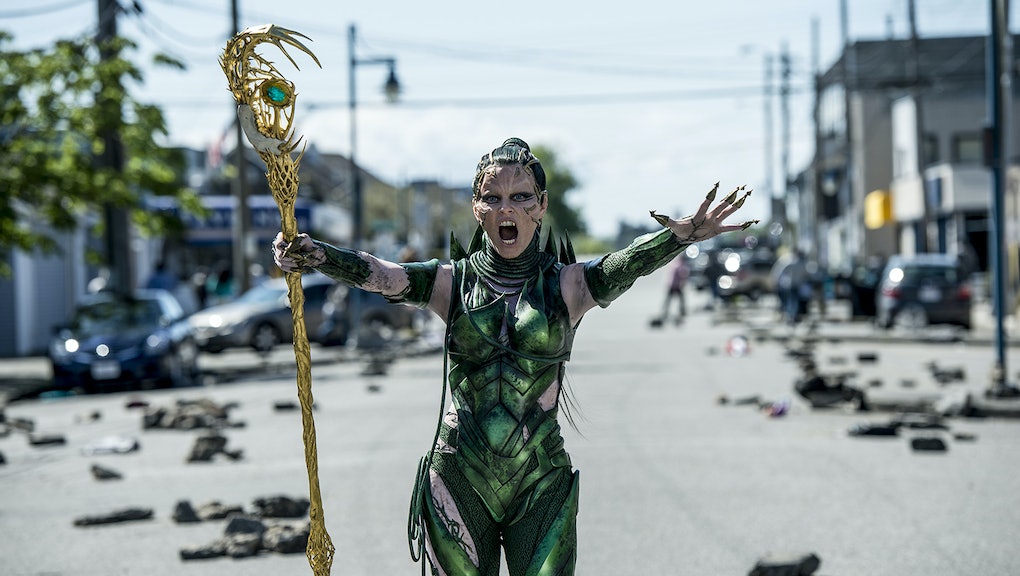 While the Power Rangers movie pays reverence to its campy source material, one of the strongest aspects of the admittedly flawed film is its willingness to mix up some of the Rangers' mythos in the reboot. This includes how the movie tackles the Green Ranger, the sixth member of the eponymous team with a checkered history that includes a brief villainous turn in the '90s live-action series.

The reboot's first big surprise happens within the prologue, which takes place — we kid you not — during the dinosaur age. Here we have Zordon, the floating CGI head voiced by Bryan Cranston, as the able-bodied Red Ranger in the middle of some battle that's left the rest of his team dead. Well, everyone except the Green Ranger, who is Rita Repulsa.

Some fans had predicted the new Power Rangers will have Repulsa kill the Green Ranger, which would explain why her outfit was prominently green. However, this Repulsa's a Green Ranger gone rogue, killing the rest of the team to try and capture the Zeo Crystal from Earth.

Thankfully, before Repulsa's able to go any further, Zordon orders the Rangers' ship to send a meteorite onto Earth's surface. Because this sequence happens in the dinosaur age, you guessed it: Bryan Cranston caused the Big Bang. Unfortunate for dinosaurs? Yes, but he did end up saving Earth and keeping Repulsa at bay for millions of years.

Fast forward to the end of Power Rangers, when Repulsa and her monster, Goldar, are ultimately defeated. The five rangers are back in Saturday detention at Angel Grove High School, channeling their best Breakfast Club selves. But viewers who stay in the theater will also be treated to a mid-credits tease — again involving the Green Ranger.

It's a pretty simple scene: The teacher running detention calls out the name of Tommy Oliver, the original Green Ranger. Moviegoers won't see anyone onscreen, but we do see a green jacket on an empty desk in the room. It can't get more on the nose than that. Therefore, assuming Power Rangers spawns a franchise — Power Rangers creator Haim Saban has five more movies planned, so brace yourselves — this means we should see the Green Ranger in future installments.

As for who might play the Green Ranger, that's still up in the air, but the Power Rangers cast has some ideas. In an interview with Mic, Becky G. said her ideal Green Ranger casting choice would be pop star Rihanna. Meanwhile, costar RJ Cyler would fancy Idris Elba as a male Green Ranger.

While we appreciate Cyler's enthusiasm for the actor who should be the next James Bond, putting a middle-aged man in high-school detention with a bunch of teenagers might feel a tad strange — even for a reboot that occasionally strays away from its source material.

Power Rangers is currently in theaters. You can check out Mic's exclusive Facebook Live interview with Becky G., Cyler and Dacre Montgomery below.