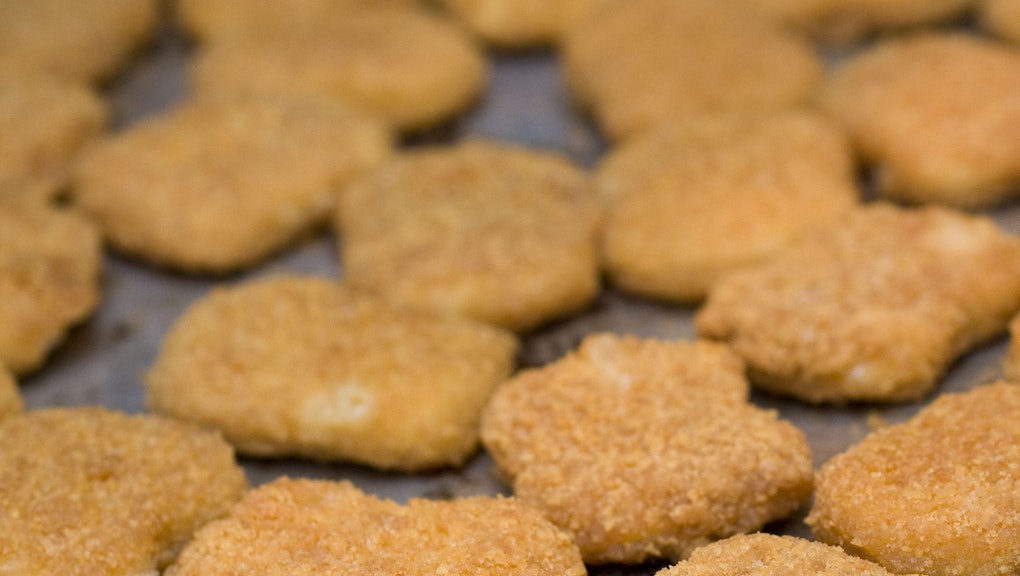 Is it a nugget, tender or finger? The definitive guide to fast-food chicken

Nuggets, tenders, strips, fingers, fritters ... what should be this country's national dish comes in a variety of forms and parades around ketchup-topped platters under a variety of names.

But is there an actual difference to these finger foods? Technically, yes. Sure, you can distinguish a chicken wing from a chicken finger (mostly because chickens don't have actual fingers, but, whatever), but do you know the difference between nuggets and tenders? There is, in fact, a legal distinction between nuggets and the other varieties of America's favorite poultry product.

"Typically, chicken nuggets are chopped and formed, whereas fingers are made up of whole muscle meat," chef Jennifer Johnson, co-Founder of Hip Chick Farms (which makes organic chicken fingers and nuggets), explained via email. "However, some fingers are created through an extruder, which grinds everything up, sometimes including stabilizers and fillers, which then shoots out a formed 'finger.' See: How McNuggets are made.

Of course, this is America, so we have certain standards for what we can call a nugget, and the U.S. Department of Agriculture is on top of important nugget regulation.

"Nuggets are irregularly shaped, usually bite-sized meat and/or poultry products which are usually breaded and deep fat fried and intended to be used as finger foods," the USDA's Labeling Policy Book states. It goes on to say that nuggets can be made from "a solid piece of meat or poultry" and labeled as such, i.e. a chicken nugget or fish nugget.

However, nuggets made from chopped or processed meats must be transparently labeled. Especially in recipes in which nuggets are made with binders or other filler ingredients in the chicken mixture, the product must be called "breaded nugget-shaped chicken patties" to prevent consumers from believing that the nugget is made from a single cut of meat. Think dinosaur shaped chicken nuggets, chicken rings and other unnaturally shaped breaded chicken products when distinguishing your nuggets from your tenders.

The USDA also says that breaded nuggets must be labeled as breaded and breading must be limited to 30%, meaning you're getting at least 70% chicken filling in every nugget you buy in this country.

"A tender is one of the more tender parts of the chicken, usually the area laying underneath the breast," Johnson said.

Tom Super, senior vice president of communications at the National Chicken Council, backed this up, explaining that a chicken tender is an actual cut meat sometimes referred to as the "inner filet," which is located between the chicken's two breast muscles. If you've ever cooked a whole chicken breast and separated the smaller, softer and thinner part from the main breast meat, you've seen a naked chicken tender. Of course, if you're making breaded chicken at home, it probably makes economical sense to cut the rest of the breast into strips to make so-called chicken tenders, a misnomer for what would really qualify as chicken fingers (more on that below), as they're not all made from that inner filet cut.

In a world where most people can't distinguish one cut of meat from another, the terms chicken tender and chicken finger are often used interchangeably. "You season a tender and add breadcrumbs and you can also turn it into a finger," Johnson explained. "Typically, chicken fingers are made using tenders."

Biting into a true chicken finger, you should feel the strands of juicy meat coming apart between your teeth. True chicken fingers are made from a whole cut of chicken and not processed pieces. "A whole muscle meat finger is best, because you are working with less ingredients, so the food in it is in a more natural state," Johnson explained, noting that this was the original method chefs used to create chicken fingers, before grinding and mechanizing meat came into fashion. Chicken strips at Wendy's, for example, made from whole chicken breast pieces, are not necessarily tenders, but they're not nuggets, they're fingers! To add to the confusion, Wendy's also serves 100% white meat nuggets, made from reconstituted chicken meat.

Anything using whole meat, and not mechanically separated, or chopped and rebound chicken.

"[Fewer] ingredients is always more in this situation," Johnson said. Nuggets, fingers and tenders can be equally nutritious as long as they are made with whole meat.

Jamie Logie, certified personal trainer and certified nutrition and wellness specialist at Regained Wellness, said he will always choose tenders if given the choice of different breaded chicken options. "Nuggets are probably the worst because you don't know the source of the chicken," Logie said via email. "Nuggets tend to be combinations of multiple chickens combined into a pressed and mixed chicken concoction. In most situations, chicken tenders, made from breast meat, are usually the healthiest choice."

And of course, baked rather than fried chicken pieces are the more nutritious choice, but, well, we know how it goes.