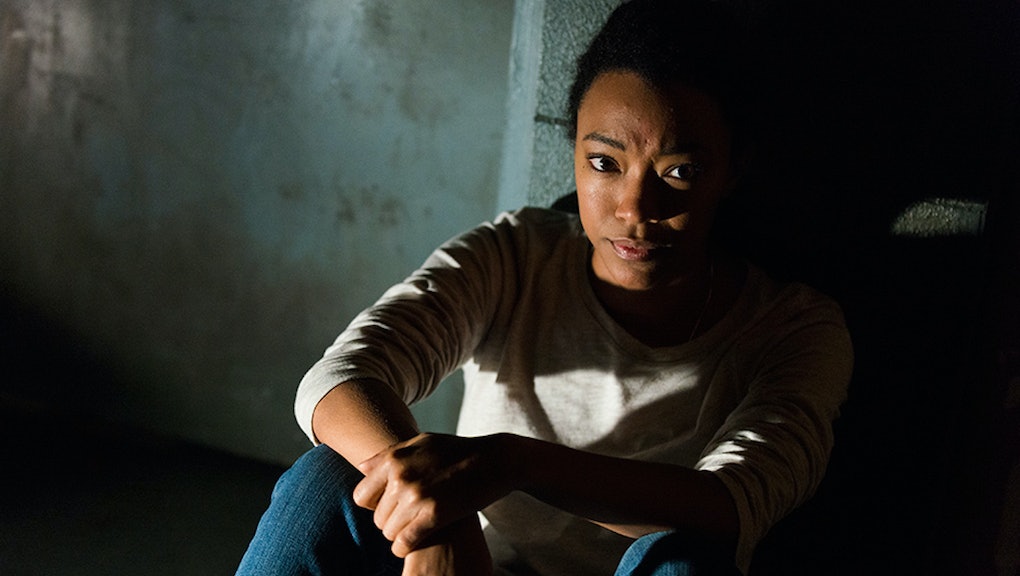 'The Walking Dead' Season 7 Theories: Sasha may get an iconic comic book death in finale

If there's anything conclusive about The Walking Dead's season seven finale, it's that we're looking at Sasha's final episode. The writing's on the wall: She's been captured by the Saviors after a botched attempt to assassinate Negan, and she's not willing to join them and betray Alexandria like Eugene did. However, perhaps the best piece of evidence for Sasha's impending death is actress Sonequa Martin-Green's casting as the lead in CBS' upcoming Star Trek series.

What's more, while Sasha is a character created for the TV show — like fan-favorite Daryl Dixon — the comics have set somewhat of a precedence for how Sasha might meet her demise.

After the events in season seven's 15th episode, "Something They Need," it's clear The Walking Dead is setting up Sasha's death to mirror that of Holly, a comic book character who has yet to make it to the small screen. But Sasha's already taken on some Holly-like qualities during her run on the show.

For starters, she was involved in a romantic relationship with Abraham before Negan brutally killed him in the season seven premiere. In the comics, Holly attacks the Sanctuary to exact revenge on the Saviors for Abraham's death — though Dwight is the one who killed him in the comics, as Abraham died the same way Denise did on the show. After leaving Rosita behind in episode 14, Sasha takes a similar approach. Both characters fail in their attempts.

Episode 15 draws even more Holly-Sasha comparisons, when Sasha is nearly raped by a Savior named David before Negan intervenes, another incident that almost happened to Holly in the comics. Sasha later asks Eugene if he can sneak in a weapon for her, framing it as an attempt on her part to commit suicide, when she's really trying to get her hands on something to kill Negan with the next time they come face-to-face. Unfortunately for Sasha, Eugene provides her with a poison capsule, the one he made for one of Negan's "wives" before changing his mind about helping her.

Now, unless Sasha could force the pill down Negan's throat — which would objectively make for some spectacular television — it's not going to do her any good. We don't know what she'll do with it yet; she could throw it away, hide it or choose to swallow it herself if she considers her situation too dire. Ultimately, what happens next is unclear, but considering Holly's death in the comics, we have a pretty good idea of where Sasha will end up.

At some point — and this happens off the page, mind you — Negan kills Holly and presents her to Alexandria as a hostage with a bag over her head. Without knowing Holly's already turned, Denise takes the bag off her head and is promptly attacked by zombie Holly. Our best bet is a similar end for Sasha in the season finale, with some caveats: If an Alexandrian were to die at the hands of zombie Sasha, it would have to be someone other than Denise, who was already killed on the show.

Either way, this much is certain: Martin-Green is heading to CBS' Star Trek series later in 2017; her character has been taken prisoner by the Saviors after trying to assassinate their leader; and she has a poison pill in her hand. I think we can safely assume she'll have her spot in Talking Dead's "In Memoriam" segment come Sunday.