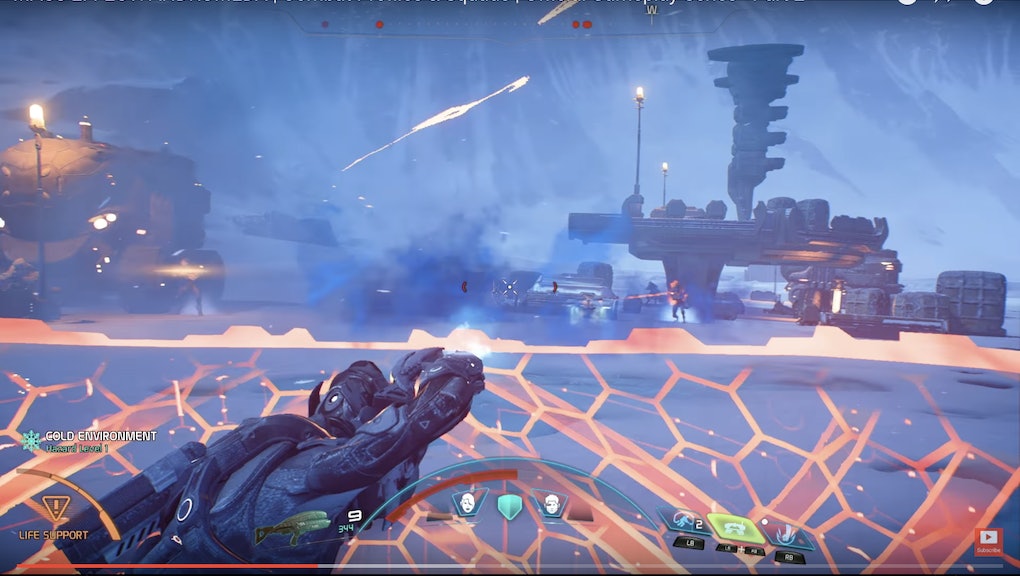 'Mass Effect: Andromeda' "Remove the Heart" Mission: How to destroy the kett outpost

Mass Effect: Andromeda, the newest chapter in BioWare's space opera RPG, is full of planets to explore and side missions to accomplish. On the icy planet of Voeld, you're going to hit the ground running with an especially involved assignment called "Remove the Heart," which tasks you with assaulting a kett citadel to shut down a force field around an ancient city and weaken the alien species' grip on the planet.

If you're stuck and unsure on how to proceed, follow Mic's guide for help shutting down the kett tower and taking out its prefect in Mass Effect: Andromeda's "Remove the Heart" mission.

Mass Effect: Andromeda "Remove the Heart" mission: How to get to the kett outpost

Getting to the kett outpost on Voeld is probably the most involved part of the "Remove the Heart" mission. According to Tof Gaming's YouTube walkthrough, when you start the quest, your first marker will point you in the direction of a large force shield covering a structure that's stuck in a large patch of ice. Buxil will chime in and say it's probably a place called Ja Niihk and that you can't disable the shield from there — you'll have to go to the main kett base first.

Follow the quest marker south until you hit a shallow ravine, and follow the ravine until you reach the monolith. The monolith is large, glowing and blue, so you can't really miss it. Once you pass the monolith, one of your party members should announce they see the path to the base up ahead, which will update your objective marker.

Keep the marker as your true north, and you'll eventually drive up a snowy incline with a bunch of mineral deposits at the end. Grab them with your mining interface and let your AI assistant SAM establish a forward operating base. You should see a narrow pathway onto which you can drive the Nomad, and that's where you want to go. Make sure you save the game beforehand, just in case you fall off the platform and can't get back on.

Mass Effect: Andromeda "Remove the Heart" mission: How to disable the kett base

The rest of the mission is a pretty by-the-numbers smash and grab. You'll eventually reach a cave system you'll need to traverse on foot. Make use of the heat lamps to recharge your life support, and be prepared to fight a lot of chosen and wraiths. At the end of the cave is a grotto with another enormous shield generator you'll need to get through. Luckily, Buxil has managed to crack the code.

Keep fighting your way through the outer rim of the kett base, toward the objective marker. When you reach it, SAM will tell you the security terminal has locked access to the base's main building. You'll need to shut down the terminal's three shield generators and destroy it before you can pass.

Once you've done that, fight your way to the base's core — which is no longer protected by the security terminal — and make your way to the hangar bay. As soon as you hit the hangar, you'll have to destroy the three hangar platforms to cripple the kett air support. Each of the terminals is on lockdown, so you'll have to find an override node for each one.

Each time you find an override node and demolish one of the hangars, you'll trigger a wave of enemies — including the more powerful kett, anointed, which wield heavy weapons and have shields you have to break through.

Once you've blown up all three hangar platforms, SAM will say you can access controls to shut down the base at the top of the Zenith observation tower. SAM will also tell you to head to the nearby marked elevator to get there; unfortunately, the base's prefect will head you off at the pass and you'll have to fight through him to proceed. He's not terribly difficult, but he can summon an ascendent's orb that will make him invulnerable until you destroy it.

Once you've defeated the prefect, you're free to head to the top of the Zenith observation deck and shut down the base — just don't forget to scan for all the item caches in the observation deck. With the "Remove the Heart" mission completed, it's time to head back to Buxil, who will offer to take you to the next leg of the quest or allow you a moment to restock at the base.