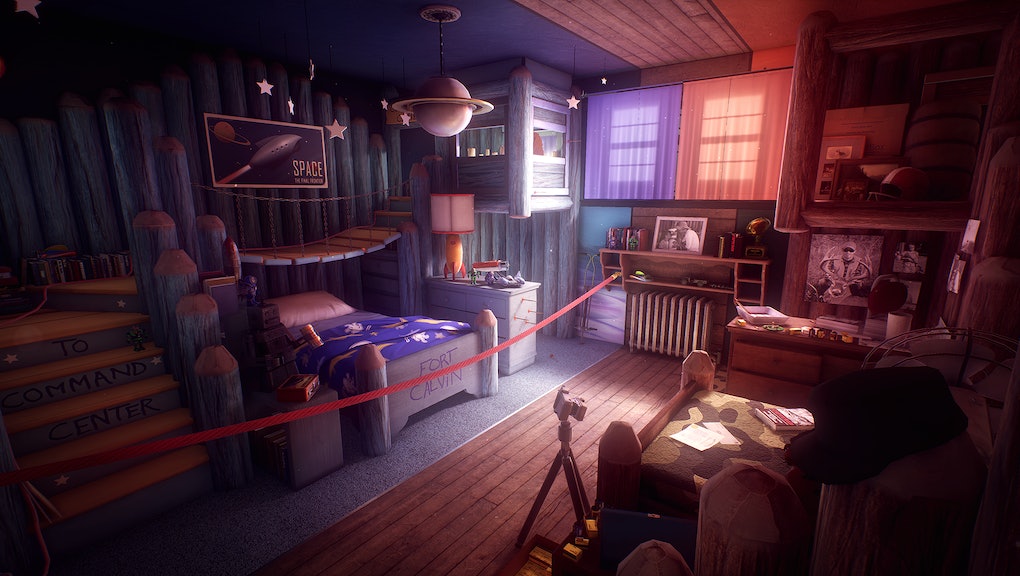 'What Remains of Edith Finch' Preview: Hands on with the beautiful upcoming PS4 game

Horizon: Zero Dawn has gotten a ton of attention as the year's biggest PlayStation exclusive (so far), but video games can be a lot more than systems-heavy open-world behemoths. A game about existing in a small, hand-crafted space with a focus on narrative over dense mechanics can be just as (if not more) compelling. Case in point: What Remains of Edith Finch.

The first-person narrative game comes out on PS4 and PC on April 25. It's an enigmatic little game that doesn't exactly demonstrate what makes it so potentially cool in a trailer. I recently got a hands-on demo guided by Giant Sparrow creative director Ian Dallas, and I came away itching to play more of a game I knew next to nothing about going in.

The short story collection is familiar in literature and, to a lesser extent, cinema. Some stories are more impactful when they don't last several hundred pages or two hours on their own. Plenty of video games could, honestly, use the same treatment, but the high cost of development often necessitates extensive combat sequences or filler quests that add playtime, but not narrative value.

Enter What Remains of Edith Finch. You play as Edith, a teenage girl revisiting the now-abandoned home her family inhabited for several generations on an island in Washington state. The catch is that every single family member's bedroom was sealed off and preserved when they died, meaning new bedrooms constantly had to be bolted onto the frame of the house. By the time you encounter it, it's reminiscent of the Weasley house in Harry Potter.

You'll explore the lovingly rendered house from a first-person perspective, entering each individual bedroom to learn who each family member was and how they died. This isn't simply a matter of listening to audio logs or reading diaries, though. Each bedroom contains a video game short story, each with its own distinct visuals and gameplay mechanics.

What Remains of Edith Finch: 10 minutes unlike any other

"Not only are the stories different from each other, they're hopefully different from anything you've ever experienced in a game before," Dallas said.

That's certainly true of the first one I played, titled "Coronation." It chronicles Edith's older brother Lewis, who died at the age of 22 only a short time before the game begins. Lewis worked a dead-end job at a fish cannery. In "Coronation," you use the right stick to perform Lewis's job by sliding fish across the table, cutting their heads off and sending them down the line.

Slide left, slide right and slide up. I maintained that repetitive motion while, with the left stick, I was controlling a rudimentary top-down adventure game set in Lewis's day-dreams. In his fantasy world, Lewis is a mighty explorer who sails the seas and establishes several kingdoms in his name. Unlike the demoralizing grind of his day job, Lewis was fully in control of his little world.

The daydream's visuals were completely different from anything else in the game, slowly expanding and eventually filling the entire screen. Again, this entire time, I am still performing Lewis's manual labor with the right stick. This progresses for about 10 minutes before Lewis's story comes to its tragic end, which I won't spoil. Once it's done, I'm Edith again, reminiscing about her cool older brother.

The objectives, controls and visuals were distinctive from everything else I saw and played that day. It's a bespoke vignette that, in 10 minutes, told a distressingly real story with nothing but two analog sticks.

What Remains of Edith Finch: A game about being overwhelmed

What Remains of Edith Finch actually started as a scuba diving simulator, of all things. Dallas spent his childhood in Washington around water, with his scuba experiences leaving a lasting impression on himself.

"The feeling of being 50 feet underwater, you're surrounded by darkness and you see the ground sloping away from you into the darkness," Dallas said. "The feeling of something being simultaneously beautiful and unsettling."

Dallas felt the emotional impact of being overwhelmed in that way made for engaging gameplay, but only in small doses.

"After a couple of minutes, it stops being beautiful and overwhelming and just becomes like a game," he said. "Then, the idea of doing a series of shorter games started to form around that," Dallas said. "The shock of the novelty and the awe of it is this delicate emotion that is good in small forms."

Each of the game's flashback sequences (of which there appeared to be somewhere between 10 and 20) adheres to varying levels of real world logic. One of them has you transform into a shark and roll down a hill, while another is as mundane as playing on a swing set. The one theme tying them all together is the feeling of being overwhelmed. Lewis was overwhelmed by the tedium of his real life compared to the grandeur of his dreams, while the child in the swing set memory was overwhelmed by the desire to fly.

One way the game breaks that theme is in its controls. Every vignette is controlled by no more than the two analog sticks and the right trigger. None of the other buttons on the controller are used.

If there's any hang-up I have about this game, it's that each story's dependence on concepts like death and being overwhelmed might make it oppressive to play. The segments I played were whimsical enough in their delivery that it wasn't a problem for me, but for some people, it might be best to take breaks between each segment.

What Remains of Edith Finch: The difficulty of development

The first thing I wanted to know after playing the game was how difficult it was to pour resources and man hours into something that might last five minutes for the player and never be used again. According to Dallas, the answer is "very."

"Every one of these stories has different problems," he said. "In the fish chopping story, the camera is so far away that shadows weren't working right. We have to go into Unreal and rewrite the way the camera works so the shadows don't fight with each other for one section of one story."

For the team at Giant Sparrow, it was also a priority to make sure the exquisitely detailed interior of the house was believable. Every family member's life was different, so the object that triggers their flashback sequence will be different, too. Edith Finch has many animations that are used only once, such as pulling a letter out of a folder in a box or unrolling a piece of paper that was jammed into a child's space helmet.

"In most games, it's not about being in a space, it's about shooting a dude in the head in a space," Dallas said. "So the spaces don't need to hold up as much."

By the way, if the premise of a young woman exploring her abandoned family home in the Pacific Northwest sounds like Gone Home, that's because it is. Dallas didn't shy away from the comparison, but he emphasized that Edith Finch was in development for six months when Gone Home was announced, so it's purely coincidental.

As a big fan of Gone Home, I can say the resemblance is purely superficial. The half hour or so that I played was enough to make me excited for a game I was only vaguely aware of beforehand. It's remarkable to see this many individual stories told in entirely distinctive ways, each with gorgeous visuals and (from what I've seen) pretty good writing. It's possible that it will wear out its welcome or too many of the stories will be of a lesser quality than what I played, but I think this is a game PS4 and PC owners should keep an eye on.

What Remains of Edith Finch launches on April 25 for $19.99. To see it in action, check out the trailer.