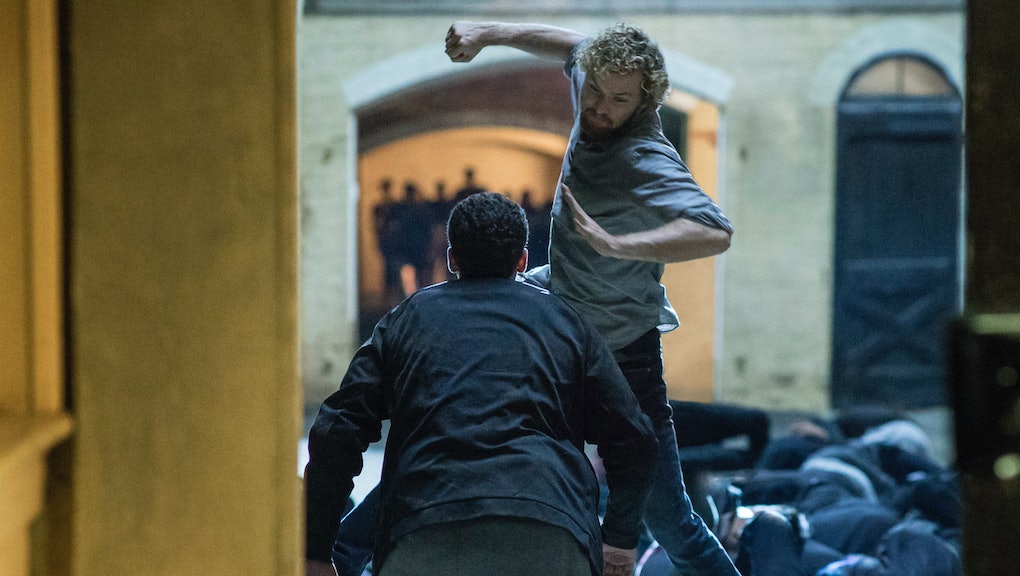 Even if you haven't tortured yourself with a binge of Netflix's latest, and most disappointing, Marvel series Iron Fist, chances are you've heard about its harsh reviews from critics or its whitewashing controversy. However, if you asked some Marvel fans on Twitter, there's nothing wrong with Iron Fist: It's a great show, confirming actor Finn Jones' assertion that Iron Fist was intended for fans, instead of critics.

Are the Marvel diehards on the right track; is there something to Iron Fist the fans can appreciate that the critics can't? While this is barely a conversation worth having — the debate over whether Iron Fist sucks should begin and end with the fact that its showrunner is a man named Scott Buck, who was responsible for writing Dexter's infamously terrible finale where the eponymous serial killer became a sad lumberjack — there's a laundry list of issues with the show that are worth detailing. There's no time to waste, this could take a while.

Jones was immediately put on notice when the Game of Thrones alumnus was cast as Danny Rand, aka the titular Iron Fist. Some fans were upset that the show elected to keep its main character white despite the problematic white savior narrative it imbued. It's particularly frustrating when you realize that Netflix almost cast Asian-American actor Lewis Tan as Danny — someone who can do his own stunts and brought more charisma to a minor villain role in episode eight than Jones did all season.

That's the big issue here: Jones wasn't particularly memorable as Danny, and certainly didn't make his character all that likable. He mansplains martial arts to someone who owns a dojo, has anger issues and even patronized a homeless person in the series premiere when noting that New Yorkers were treating them the same way, despite their different circumstances.

However, Jones didn't do himself any favors with his comments on the show. We already mentioned that he said Iron Fist was meant for fans instead of critics, which implies that fans would hold the show to a lower standard. He tweeted about representation, and when people pointed out the hypocrisy, he briefly deleted his Twitter after a few tone-deaf responses. He blamed President Donald Trump for the show's poor reviews, because Danny's a white billionaire. Jones is apparently unaware that people universally love Bruce Wayne and Tony Stark.

On and off the screen, Jones was a train wreck. Meanwhile, here's a video of Lewis Tan, Iron Fist's most charismatic one-off character, doing his own stunts.

On the subject of Danny, his hero's journey makes little sense because he completes his mission as the Iron Fist through mere coincidence. One would assume Danny left the mystical monastery K'un-Lun to defeat the Hand, the monastery's arch-nemesis. This is the very basic outline of the Iron Fist's responsibilities: Protect K'un-Lun, and defeat the Hand.

However, we learn that he returns to New York because he wants to reconnect with his identity as Danny, rather than the Iron Fist. The fact that the Hand is running a drug operation in New York is just fortuitous, unless you're one to believe it was part of his destiny. As for K'un-Lun? Well, he ditched his post and the season finale shows that the monastery has disappeared. The fact that there's a few bodies of the Hand outside the would-be entrance implies that they were successful in invading K'un-Lun. In other words, Danny's really bad at his job.

Other characters make illogical choices that serve little else than to move the plot — which also makes no sense — forward. Take Joy Meachum, Danny's childhood BFF who, for much of the series, is the only person in New York from his past life that believes he is who he says he is. Fast forward to the season finale, and she's ready to conspire against Danny with Davos and Madame Gao, because her long-lost father was killed — which, by the way, wasn't by Danny's hand, but her brother Ward. Few character arcs on Iron Fist are nuanced, or rational.

A lot can be said about how awful the writing was for Iron Fist, but it's better to show rather than tell. Thankfully, one Twitter user chronicled some of Iron Fist's most absurd lines — and you can check out some of the highlights below.

In fairness, this isn't just a problem with Iron Fist: All of Netflix's Marvel series suffer from pacing issues, and all of them would benefit from sticking to 10-episode seasons rather than 13. But yes, the pacing here is less infuriating than it is perplexing.

For starters, the second episode of Iron Fist is a gaslight episode, in which the series posits whether Danny's 15-year voyage to K'un-Lun is actually an elaborate fabrication from someone with a serious mental illness — it's way too early for that. The Hand is, as expected, a big presence in the show, and yet we aren't formally introduced to one of its leaders, Bakuto, until the tenth episode (if you stuck around till then, you're a superhero in your own right).

Danny's backstory in K'un-Lun? We're still waiting for it! We get a few glimpses throughout the series, but nary an interaction with any of the monks that trained Danny for 15 years, and next to nothing on how Danny's able to attain the Iron Fist's powers from fighting a mystical dragon named Shou-Lao, as per the comics. The latter is completely unforgivable, because fighting a dragon is inherently fascinating.

What does separate Iron Fist from Daredevil, Jessica Jones and Luke Cage is its villains. Put simply, none of them stand out. Part of the reason is that Iron Fist presents too many of them: The Meachum siblings, their father Harold, Madame Gao and Bakuto are all present, at times suffocating entire episodes, and it stifles an already confounding narrative.

Iron Fist has no Wilson Fisk or Cottonmouth equivalent — in other words, a menacing villain with an unexpected touch of humanity hiding beneath the surface. Alongside Jones' uninspiring lead work as Danny, it means Iron Fist doesn't have a compelling performance to guide the show during its weakest moments — something even Daredevil's enigmatic second season was able to achieve with the aforementioned Fisk making a brief return.

Rand Enterprises, the multibillion dollar company co-founded by Danny's father, is a focal point throughout the season in ways it should've never been. Danny's surprisingly invested in his company's financial future for someone who's spent the last 15 years in a secluded monastery where he was taught — as the next Iron Fist — to remove himself from his identity as Danny.

So, not only is it antithetical to what the character should be focusing on (though as I said before, he's a pretty shitty Iron Fist), it's ultimately uninteresting. The show about a martial arts master with a magical chi-powered punch is way too invested in corporate politics, but not to the extent that it has anything thought-provoking to say about capitalism or corporate greed.

Rand Enterprises exists as spectacularly boring window dressing for a show that was too afraid to dive into the character's most mystical — and fascinating — elements from the comics. To put it another way: We had countless scenes in Iron Fist set within Rand Enterprises' conference rooms and offices, and zero scenes in which Danny fights a fucking dragon to obtain his superpower.

Including a character too aware of all the show's problems

To be clear: Claire Temple is an awesome character, and one of the best parts of the TV universe Marvel and Netflix have created. Claire typically has some snarky comments for New York's heroes, and they're usually on point. But on Iron Fist, my lord, Claire's way too good at pointing out the show's flaws.

She's basically an audience avatar for anyone aware of the terrible drivel the characters are putting themselves through. She questions Danny's plans, and his weird, temporary fixation on murdering characters — which, again, he really makes for a shitty superhero. She points out that "Iron Fist" as a name makes no sense.

As a mouthpiece for the show's absurd moments, Claire Temple's effectiveness reaches new heights — to the rest of Iron Fist's detriment.

Iron Fist season one is currently streaming on Netflix (though clearly, we suggest you skip it).