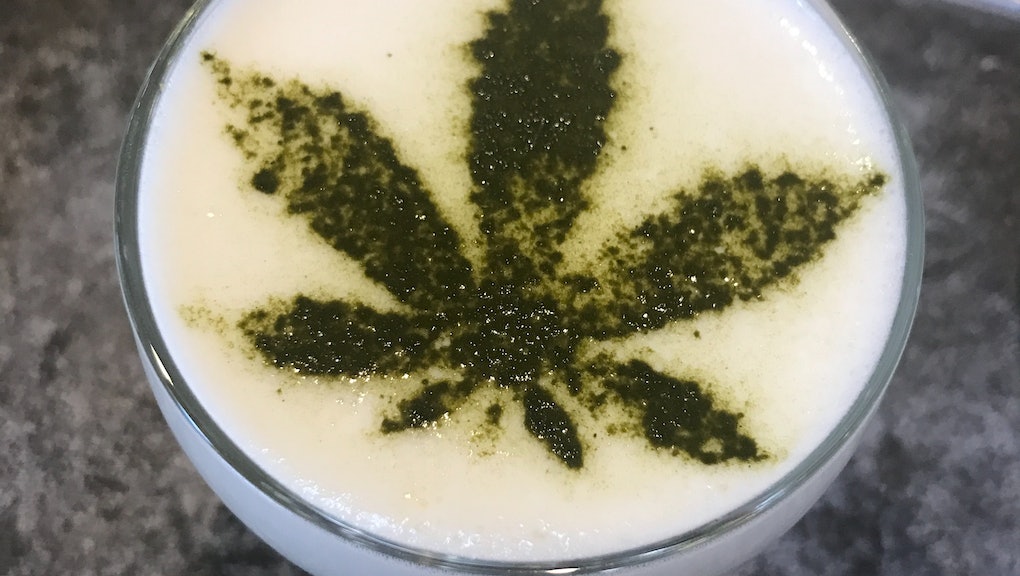 Drinking cannabis cocktails will give you the buzz of a lifetime

As someone who enjoys drinking booze almost as much as smoking weed, I'm often forced to prioritize one intoxicant over another. So imagine my excitement when I learned that cannabis cocktails have become a reality.

Yes, the advent of legal recreational marijuana in California means pot and alcohol need no longer remain separate indulgences here. Jason Eisner, a veteran bartender, has taken full advantage of that with a trio of weed-tinted drinks served at Gracias Madre, the West Hollywood organic vegan Mexican restaurant where he serves as beverage director. (Two of these cocktails can also be found at Gratitude in Newport Beach, an offshoot of Café Gratitude.)

One recent afternoon, I took on the arduous task of traveling to Gracias Madre — by bus, since who knew how crunk I'd be afterward — for some extremely professional day-drinking. I went on an empty stomach, and without any marijuana in my system, so that I could experience these finely crafted libations with a clear head and unspoiled palate. Gracias Madre is also the kind of place where you might run into Natalie Portman, so it's best to be on your toes.

Why combine weed and alcohol?

Plenty of rap tracks have extolled the mixture of a marijuana high and alcoholic inebriation as key to a wild night. But Eisner's drinks aren't trying to get you especially twisted. The weed extract in these drinks is CBD (or cannabidiol) oil, a non-psychoactive cannabinoid found in weed. Unlike its cousin THC (tetrahydrocannabinol), this compound doesn't get you "stoned," and is rather increasingly revered for its medicinal properties. It can dampen nausea, anxiety and inflammation, promoting a sense of calm or ease that many find preferable to the occasionally intense high of a THC buzz. And we seem to be discovering new therapeutic uses for it almost daily.

CBD has also been shown to counteract some of THC's less desirable effects, and when you combine it with booze, it actually lowers your blood alcohol content, meanwhile causing no direct impairment to your motor functions. In that sense, it may actually level you out when drinking, letting you relax when you might ordinarily get rowdy. Personally, I would say that it makes me feel balanced, composed and subtly euphoric without overloading or scrambling the senses in the way weed and liquor both tend to do.

Finally, as the Gracia Madre menu notes, CBD oil has a unique flavor — smooth and buttery — that makes it a great ingredient in cocktails.

The first thing any non-celebrity glancing at this menu will notice is how expensive these "High Vibes" are. Even at the secret speakeasies in New York, bespoke cocktails seem to max out at $17. But think of it this way: You're getting a premium marijuana product and high-end liquor in your glass. And on novelty alone, it's hard to turn your nose up at these concoctions over price.

When it came time to take the plunge, I went with the first drink on the list. It had to be up top for a reason, right? Maybe because it has the best name

It's not quite negroni season yet, but the Stoney Negroni had the catchiest name, so I ordered one. In a few moments, a Gracias Madre bar manager named Natalie placed the beverage before me so that I could read the words stamped on the orange rind that garnished the single ice cube: "puff puff pass." Nothing off-brand here.

I took a hesitant sip and picked up strains of licorice and orange; the gin undercurrent was there, but the port wine and CBD oil rounded it out, and the substitution of Contratto Aperitivo for Campari made for a flavor far less antagonistic than I tend to expect from negronis. Could it be that I was a convert?

The effects felt strangely immediate — I'd stepped into the restaurant with a slight migraine and a little sun-dizzy, but the Stoney Negroni wiped my brain clean of any fog, leaving my thoughts serene and steady. In the way that a stiff martini can instantly give you an electric jolt of drunken potential, this cocktail offered near-immediate soft relief from my whole day up until then.

The Stoney Negroni wiped my brain clean of any fog, leaving my thoughts serene and steady.

Impressed, I asked Natalie how much CBD oil was in the drink. I'd seen her delicately dispense it with an eyedropper, carefully counting each drop.

"We do 20 milligrams" of CBD oil, she said. "Five drops of 4 milligrams each. And since it smells like weed, you can kind of sniff the drink and see if it's the right amount." Having seen her sniff my glass as she prepared the drink, I was altogether glad to have this mystery explained. She laughed, saying it was tricky to get it just right. Well, practice makes perfect, because this was as lovely a negroni as I've ever had.

Before I'd even finished it, Natalie wanted to know what I was having next.

An old-fashioned is much more my speed. My grandmother was still trying to order them well into her 80s when we had family dinner at Friendly's. Bourbon just works, especially when it makes me feel like a southern novelist.

The Rolled Fashioned, true to that fantasy, has been fired in the esteemed BBQ pit of some Bayou region. It arrived with by far the best bonus: a bite of vegan churro in — what else? — a dime bag clothespinned to the glass. There's a smoky, unctuous honey glaze to the drink itself; it's a sweet golden splash of strong, sinus-clearing nectar. Natalie revealed the secret ingredient: "It's our house-made wood syrup, with mesquite," she said of the sarsaparilla. There was, on the very back of the tongue, a bite of subtle spice as well.

As with the Stoney Negroni, the CBD oil held its own in the mix. With this round I was beginning to realize how it hovered lightly above the brasher flavors, or neatly finished them off. It wouldn't be right to call the Rolled Fashioned refreshing — not when it starts to congeal into bergs of sugar that cling to the glass — but it furthered my overall awareness of cognitive refreshment. It occurred to me then that CBD might combat the sluggishness of being drunk. Indeed, there's evidence that CBD contributes to wakefulness.

CBC might combat the sluggishness of being drunk. Indeed, there's  evidence that CBD contributes to wakefulness.

I wanted to know more about the CBD oil that Gracias Madre was using. "Right now we get it from a lab in San Diego," Natalie said, "and it's 5:1 CBD-to-THC ratio." Meaning that for every 20 milligram CBD cocktail, I was also getting 4 milligrams of THC, enough to be considered a microdose of the psychoactive cannabinoid. "But we're also looking to do something with the guys who made Charlotte's Web," she added, referring to the Stanley brothers, Colorado growers famous for a high-CBD, low-THC cannabis strain named after a young epilepsy patient whose constant seizures have been miraculously alleviated by the oil extract. It remains to be seen how difficult getting their product across state lines for the purposes of bartending may be. "Everything's crazy right now," Natalie said.

Meanwhile, I had one last drink to get to. Not even the lunch rush could stop me.

By this point, I had entirely lost interest in the plate of vegan food I'd ordered to make sure I didn't get too wasted (Brussels sprouts with avocado pesto, tempeh chorizo and almonds) and was fixated on the drink-making process. There was a special satisfaction to seeing Natalie dole out the golden drops of CBD oil from its pretty glass bottle, and given that the Sour T-iesel is named for Sour Diesel, a legendarily potent East Coast strain of marijuana, I had every hope that this was the crown jewel of the cannabis cocktails on offer.

Presentation-wise, I was right. The Sour T-iesel announces its weediness with a pot leaf made out of mint. Likewise, it's the weediest-tasting of the batch — through the foam of aquafaba, a vegan egg-white substitute, I got notes of earth, lime and grass. The mental association was of rolling around happily in a green meadow. Usually, if I'm $60 into a bar tab and not feeling at least a bit tipsy, I'm annoyed, but I was enjoying the level balance the CBD gave me on my undercurrent of booziness. It's not to say that I would've been safe driving home, more that I could've still recited the alphabet backward if necessary.

My headache was long gone, and my knees, which had been sore from an ill-planned run, had stopped alerting me to any pain. That's what 60 milligrams of CBD oil will do for you. It didn't really matter, near the end of this summery number, that I disliked the film it left on my teeth (or was reminiscing about the outstanding pisco sour I'd had the previous night). These aren't ordinary drinks, and I wasn't an ordinary sort of inebriated. There was no haze, no confusion and no delayed nervous response, only all-encompassing chill.

When I went back out into the bright world, I wasn't squinty and stumbling like I would've been after a day knocking back beers in a typical bar. It was more as if I'd just engaged in some lightly invigorating activity — like a walk around a big park in brisk, sunny weather — and come away in a very good mood.

My knees, which had been sore from a run, had stopped alerting me to any pain. That's what 60 milligrams of CBD oil will do for you.

To seal my favorable impression, though, Natalie brought me a bowl full of extra churro bites. Some stoner stereotypes are simply never going to change.

Keep up to date with the ever-changing landscape of legal marijuana. From fluctuating weed prices to the health benefits of vaping, the science of drug tests to hot new trends like microdosing, you'll always know the key facts in a confusing culture where misinformation is all too common. Stay abreast of states looking to reform their laws, learn the terminology, discover groundbreaking advances in cannabis treatments and find out what America's favorite semi-illicit substance can do for you.