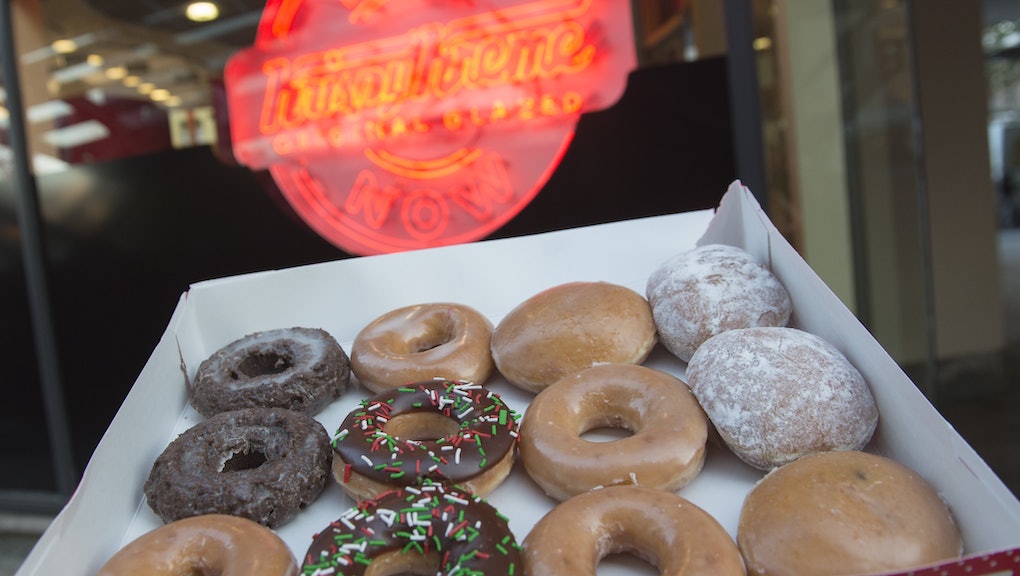 Like the '90s live-action series, the Power Rangers movie takes place in the fictitious town of Angel Grove, California, where all the rangers live. What do we find out about the town? Not much — the rangers all attend Angel Grove High School, and spend their Saturdays in detention, because beneath this superhero story is a Breakfast Club pastiche. The other thing we know about Angel Grove?

Angel Grove has a Krispy Kreme.

If it seems odd to single out a donut chain, it's not: Power Rangers makes Krispy Kreme one of the craziest uses of product-placement in recent memory. It's one thing to throw in a quick reference to a chain — like Man of Steel's eponymous hero briefly destroying an IHOP restaurant and all its delicious pancakes inside — but it's another thing to make said chain the focal point of your plot.

Put simply, the villain Rita Repulsa is on Earth because she wants to steal the Zeo Crystal, an artifact that — among other things — is responsible for the rangers' powerful suits. If the Zeo Crystal is removed from Earth, everyone's doomed. Typical world-ending scheme, right? Well, it's up to the Power Rangers to stop Rita Repulsa before she discovers where the Zeo Crystal is buried and digs it up using her titanic golden monster, Goldar.

So this Zeo Crystal, something Repulsa has been after since the dinosaur age (seriously), is located somewhere in Angel Grove. OK, but not just anywhere — it's underneath the Krispy Kreme. This means in the third act of the film, there is a race between Repulsa and the rangers to get to the town's Krispy Kreme. This is a good time to mention that Repulsa is an alien, so she treats the term "Krispy Kreme" with such reverence, because she's literally waited for millions of years to get her hands on the Zeo Crystal and this is the only thing standing in her way.

But wait, there's more. Once Repulsa and Goldar make it to the chain, naturally, she's got to make her way inside and eat one of the donuts. While she is an alien and it's unclear if she's eaten food on Earth before, Repulsa does enjoy her bite of Krispy Kreme's original glazed (doubtless nobody told her about its nutritional information before an epic fight against the rangers).

While we've seen absurd product placement in movies before — the monstrous, genetically modified dinosaur in Jurassic World was technically sponsored by Verizon Wireless — Power Rangers takes it to a new level by putting Krispy Kreme center stage for its climactic battle.

The extremely unsubtle marketing for the donut chain wasn't unnoticed by moviegoers over Twitter.

Make your way to Krispy Kreme's — sorry — Saban's Power Rangers, currently in theaters, and end your moviegoing experience by stopping by your local Krispy Kreme for some Power Rangers Donuts. It's what the rangers would want.