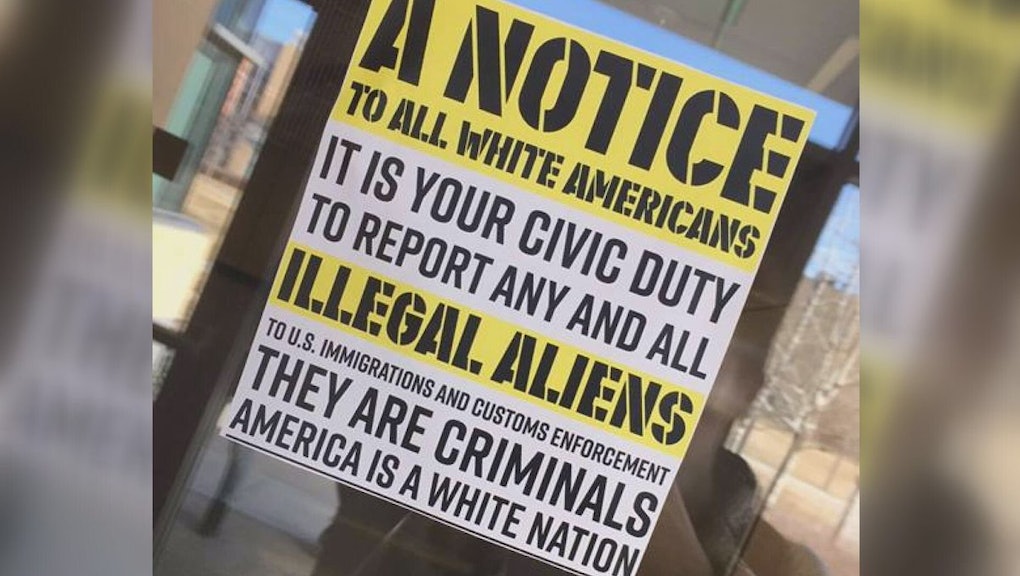 A student organization at Gustavus Adolphus College in Minnesota has taken responsibility for flyers hung up around the campus claiming that "America is a white nation."

On Monday, the Diversity Leadership Council published an apology on their Facebook page for posting flyers asking "all white Americans" to report "any and all illegal aliens."

According to the post, a subcommittee within the organization, which represents 20 on-campus groups, posted the flyers with accompanying A-frames detailing how to fight implicit bias.

"We want to help put an end to bias-related incidents that happen on our campus, social media, and in our communities by forcing individuals to have dialogues about forms of hate and bias," the post reads.

However, some students believe the flyers were not successful in starting that dialogue. One student, Kevin Hernandez, told Southern Minnesota News that the posters stoked negative feelings and made him feel unsafe on campus.

"With those posters being put up yesterday in the manner that they were, to me just made my fears come to life and had me believing that if someone could be that vocal about their feelings about immigrants...who knows what else they would do," Hernandez said.

However, in a statement to KEYC, dean of students JoNes VanHecke saw the value in the flyers.

Over the past few months, several racist and xenophobic flyers have popped up on college campuses nationwide. Earlier in March, flyers mimicking old Japanese internment flyers popped up on the University of California San Diego's campus. In a statement, an anonymous student published an open letter in a student newspaper regarding his intent for hanging them.

"The posters were meant to mimic the internment posters because I wanted to shock/anger people and to show them what could happen if they didn't do anything to stop it," they wrote. "It was a warning presented as a possible future."

In a statement sent to Mic, the school's Muslim Student Association said the posters "created real fear and tension among our members and members of the Japanese community on campus."

These so-called well-intentioned examples are seemingly outliers in the recent spate of racist messages on college campuses. In February, white nationalists posted flyers on campuses around the country calling for people to "imagine a Muslim-free America."