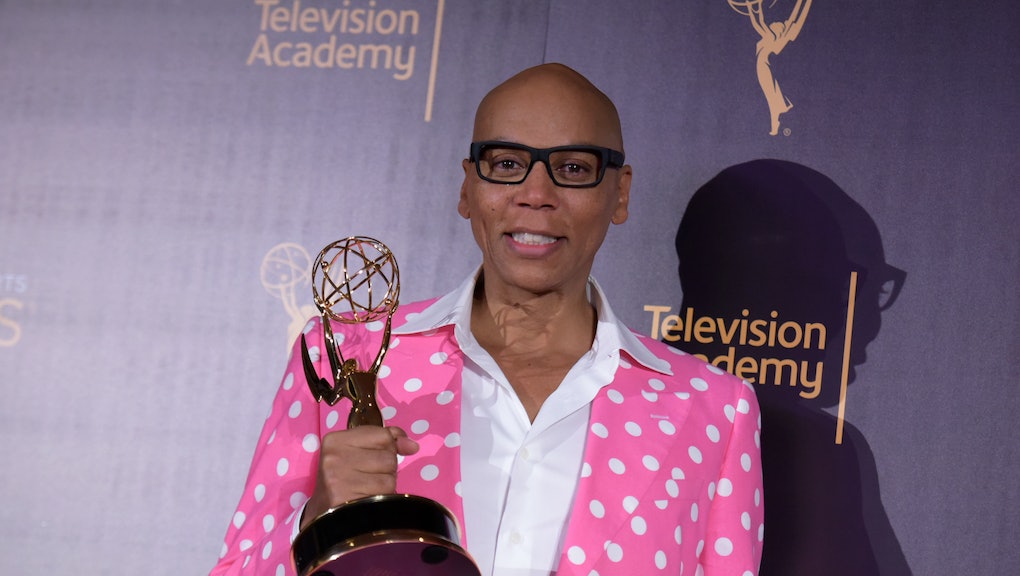 We'll be analyzing RuPaul's Drag Race's season nine premiere for quite a while — not to mention how in-depth we'll be getting with the rest of the season — but for now, let's go on an Easter egg hunt.

Like any show with a cult following, Drag Race is filled with references to itself that only the most eagle-eyed fans will catch. Even for us, it takes a couple of watches through to get them all. But after some thorough hunting, we've compiled all the references and Easter eggs in this episode, listed below in chronological order for your gagging pleasure.

That's season seven queen Pearl on the front of season nine competitor Shea Coulee's dress. Before moving to Brooklyn, Pearl worked in Shea's hometown of Chicago, where they knew each other.

When Gaga first walks into the Drag Race workroom, some of the queens mistake her for a Gaga impersonator. One such queen, New York's Alexis Michelle, evaluates her would-be competitor with, "So this is the Derrick Barry of the season." Derrick Barry, a renowned Britney Spears impersonator, participated in season eight and got fifth place.

"Charisma, uniqueness, nerve and talent" are RuPaul's guiding criteria for picking America's next drag superstar. So of course, when it comes time to naming the pageant challenge that opens the season, Ru would return to her favorite acronym.

Not much to this one: When Valentina walks out in a Spanish-influenced hometown outfit, judge Carson Kressley riffs on RuPaul's "Shantay, you stay" catchphrase by substituting "Olé." (Not all Easter eggs are created equal.)

Shea Coulee says this when introducing herself in her hometown look, and more recent Drag Race fans might not get the reference. It's from an Untucked episode in season two, when Mystique Summers Madison clapped back at a bitchy Morgan McMichaels during a heated fight. It's easily the oldest reference on this list — in fact, of all the judges, RuPaul herself was the only one on the show back then! However, Honey Mahogany re-created the fight and iconic line delivery in a season five episode.

"Do I have something on my face?"

Two Pearl references in one episode! When Sasha Velour walks out in Gaga's intentionally messy "Applause" makeup, Mother Monster can't resist making a reference to the tense argument between Ru and Pearl in season seven. Good for Gaga, getting an Easter egg in!