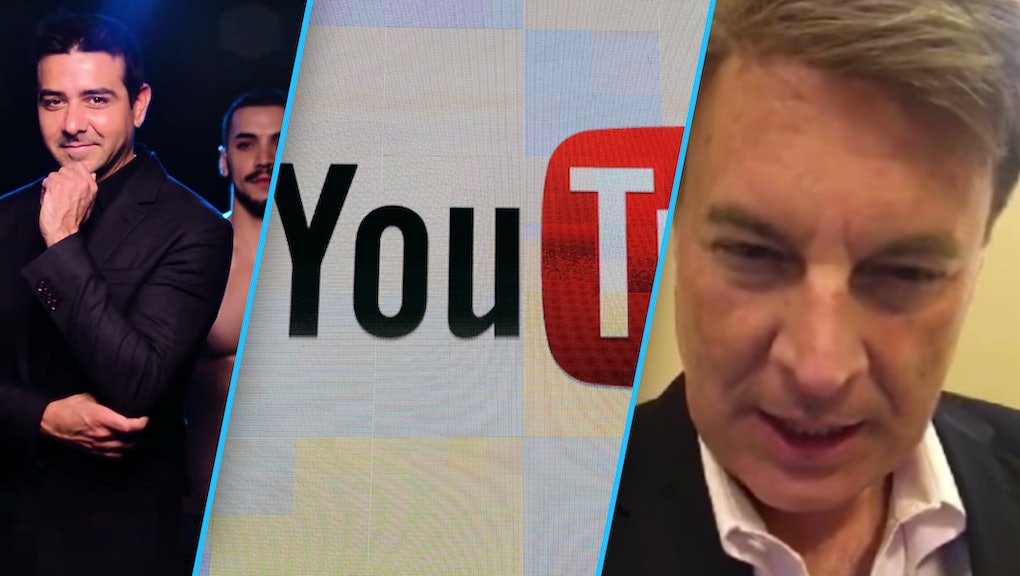 YouTube, Andrew Christian, Lance Wallnau: Who did The Most this week?

What does it mean to do The Most?

Sometimes it's not enough just to do the bare minimum, or "just enough." People can't help it — they go over the top. They go a little too far, or even a lot too far. They do The Most. In this recurring column, Mic will look at the people who left subtlety in the rearview mirror and put an un-self-aware foot on the gas.

So tell us: Who did The Most this week?

It's a bus the color of Dramamine that's guaranteed to make you car sick.

Conservatives who had nothing better to do with their time and money decided to drive a "free-speech bus"  into New York City this week to convince Americans that transgender people have been gaslighting the entire world and don't actually exist.

Joseph Grabowski, a spokesman for NOM, told BuzzFeed that "we need a discussion about how to respect everyone" and then also went on to call trans identity a "disorder" that he'd prefer people live out "privately." Grabowski's definition of trans identity is at odds with the American Psychological Association, which does not define transgender identity as a disorder.

Later, BuzzFeed reported that only one day after kicking off its tour, people spray-painted "trans liberation" on the bus, bashed in the windshield and hammered holes in the vehicle's side.

Looks like, when it comes to civil rights and busses, the score is National Organization for Marriage: 0 and Rosa Parks: 1.

This week, LGBTQ content creators spoke out against ubiquitous video-viewing site YouTube for the platform's decision to ban users from seeing some LGBT-specific content while in "restricted mode." While YouTube stars have an online reputation for narcissism, this wasn't about people not being able to see their videos. Overall, the move prohibited young YouTube users from finding the LGBTQ content they use to find out more about themselves and the community.

YouTube issued a sort-of apology on its Creator Blog, saying, "The bottom line is that this feature isn't working the way it should. We're sorry and we're going to fix it."

But the apology doesn't deal with the real issue. What red flag did something like a PBS segment on Moonlight — part of the restricted video cache — raise? What alarm went off because of videos about coming out, talking about relationships or reviewing LGBT books?

And an even bigger question — does YouTube realize the sheer amount of content queer people in the community watch and consume that's not explicitly queer but still adored? Is it going to censor The View's epic showdown between Elisabeth Hasselbeck and Rosie O'Donnell? Will it yank Viola Davis' eight minutes of glory in Doubt from the site?

Until YouTube finds a way to block entire recuts of Star Wars: The Force Awakens meant to indulge in Poe-Finn fan fiction, it's losing the queer-content battle big time.

It doesn't take much to slap together a gay-centric reality show these days. Some men with chiseled torsos, a dash of chest hair and tight swim trunks will do the trick. But we're not here to talk about Fire Island.

Not to be outdone, gay underwear magnate Andrew Christian dropped a 40-second trailer for his reality show, Model Behavior, this week.

"Have you ever wondered what it's like to be surrounded by underwear models all day?" Christian asks rhetorically in the trailer's opening line. The answer is no, I haven't, but I feel like you're going to tell me anyway.

Mind you, during the entire trailer, the pixelated bulges of adult film stars Arad Winwin and Topher Dimaggio flank Christian as he delivers all his lines.

The trailer, which was shot in a closet covered in high-school science fair oaktag paper, doesn't feature clips from the actual show like your typical reality trailer. Instead, a cast of nameless underwear models enacts whatever Christian is saying on screen.

As Christian says, "the drama," cut to a clip of one model eating cereal in his underwear while another model, pixelated for the gods, says, "Don't think I'm that kind of bitch when I'm not."

And finally, what we've all been waiting for ... "the who's sleeping with who," at which point the camera just shows two random men making out and then one Andrew Christian model saying, "Hashtag, always fuck before you work together."

Christian ends the trailer asking us to wait and see what happens next. Respectfully ...

Most gay people would agree that they're gay no matter what they eat, but that's not what Lance Wallnau believes.

Pastor Lance Wallnau, who loves Trump, claimed in a Periscope that an "anointed" cake turned a gay bartender straight, Joe My God reports.

According to Wallnau, two sex workers who were also "saved" helped out a gay bartender who was "very adamantly anti-Christian" so they baked him a cake and prayed over it. He was, in a word, delivert.

"It was an anointed cake," Wallnau said of the egg, flour and milk mixture. "The power of God hit him while he was eating the cake."

We have a few questions: What flavor was the cake? Does Wallnau realize how much gay people love cake? Queer people have literally made wedding cakes an entire civil rights issue. Have you seen that season of Top Chef: Just Desserts, which was clearly one of the gayest seasons of reality television ever?

Wallnau then claimed that the bartender not only felt "the presence of God" while munching on the confection, but also he underwent a spiritual transformation and then eventually got baptized.

Wallnau didn't divulge the flavor of the cake or whether the cake's effects are still with the bartender today.

So, who did The Most this week?