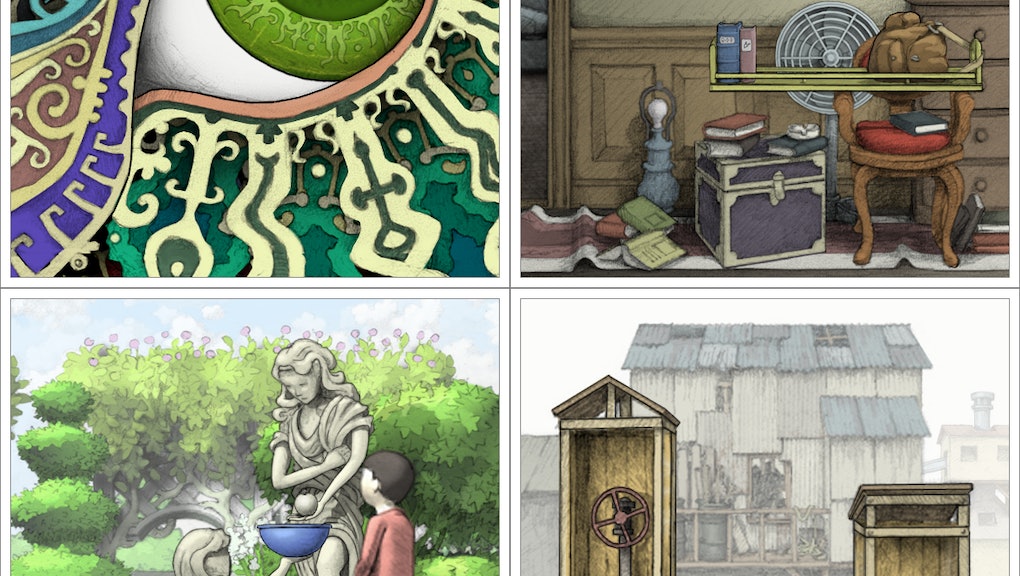 Comix Zone for the Sega Genesis is a pretty bad game, but it had one neat trick. As you moved through its sidescrolling levels, your character would physically jump between different panels of a comic book. The animation was great and it was incredibly eye-catching at the time.

What if the concept of taking a familiar artistic format and subverting it was applied to a good game? Gorogoa might be the answer. It's an upcoming puzzle game for Mac, PC, iOS and Android that's being developed by Jason Roberts. I had an opportunity to play Gorogoa last week and talk to Roberts about a game that defies description.

Gorogoa has to be seen to be understood

I can't describe Gorogoa to you. Before we move on, you'll need to watch at least a little bit of a demo from Roberts' YouTube channel.

In Gorogoa, you solve puzzles by manipulating scenes on a 2x2 tile-based grid. That means there can be up to four scenes happening at once, but in the demo I played, that was rare. You can zoom in and out on pre-determined points in scenes or click on "hot spots" to trigger some kind of reaction. If there's an open door frame, you might be able to drag it over a different scene and bring someone through the door into the first scene. The same goes for windows or other glass surfaces.

I spent most of the demo poking at everything I could, experimenting with different alignments and combinations of tiles to figure out how to progress. It felt like a classic PC point-and-click adventure game (think Monkey Island), but instead of combining items in my inventory, I was combining different environments.

"It's like an adventure game, except your locations are also your inventory," Roberts said. "Or, it's like playing four adventure games simultaneously."

Each scene is hand-drawn in pencil by Roberts, which explains why Gorogoa has been in development for several years. He didn't set out to do the most difficult thing possible; he's just more adept with a pencil than with digital art tools. That means the puzzle design and the art are inextricable, which makes testing difficult.

"Since the puzzles are all about pictures fitting together, it's much more difficult to separate the puzzles from the art design," Roberts said. "In order to test that a puzzle works, I have to take the art to a certain point."

Even in the half hour or so that I played Gorogoa, I was constantly surprised by the depth of the puzzles. The extent to which some scenes can be zoomed in on or out from is impressive, and it frequently introduced new concepts I would never have expected.

In one instance, by correctly adjusting the zoom levels on three entirely separate tiles and aligning them in the right way, I was able to roll a rock down a set of hills. I had to zoom in and out as the rock was rolling to get it to its destination, which introduced an element of timing that I never thought I'd see in this game. Once you figure it out, though, it's pretty special.

"When two tiles join together, I want them to feel like the miraculous transcending the ordinary," Roberts said."

The art is fairly abstract, but there actually is a narrative happening in Gorogoa. I didn't get a firm handle on what was going on in my short demo, but I could tell that it was planting seeds for further plot development, even if the game has no text or narration to guide the player along. Roberts felt strongly that the game needed a story so that the scenes had a purpose beyond accommodating puzzles.

"Over time, I've preferred the idea that the scenes actually work as part of a story," Roberts said. "They don't feel like they're just to justify the puzzles."

Still, don't expect a Mass Effect-style exposition dump at any point. Roberts told me the game will give you more clues as you go along, but some details will still be left to your imagination.

"The player can sense if I'm trying to tell a story that I don't understand," Roberts said. "I want it to be clear, but not too clear."

Gorogoa doesn't have a firm release date, but it's supposed to come out in 2017. Roberts is still finalizing all of the game's art and visual cues, and he mentioned several times during my demo that certain elements were only temporary. The demo was entirely mouse-driven, but I could see it being especially great as a mobile game. Puzzle game fans should definitely keep their eyes on Gorogoa.