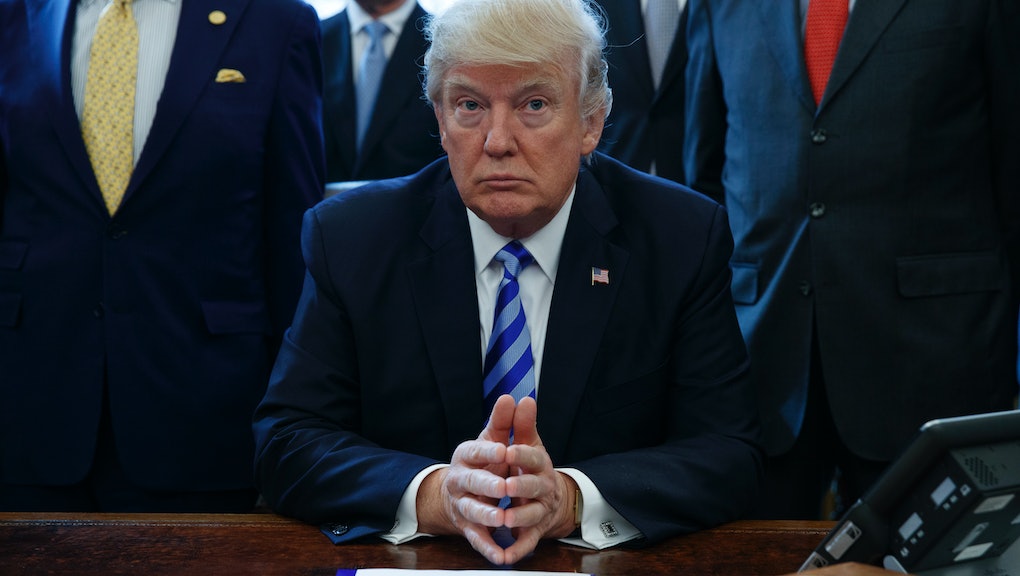 House Republicans failed on Friday to repeal the Affordable Care Act, as the GOP's American Health Care Act was pulled from the House floor due to lack of support. It's a stunning embarrassment for both the Republican Party and its leader, President Donald Trump, who together have promised to repeal and replace the ACA — known colloquially as Obamacare — for seven years.

Trump himself is on record dozens and dozens of times promising a better alternative to the Affordable Care Act. Here are just a few of those instances.

During his now infamous speech announcing his run for president, Trump promised to repeal Obamacare.

"We have to repeal Obamacare, and it can be replaced with something much better for everybody," Trump said. "Let it be for everybody. But much better and much less expensive for people and for the government. And we can do it."

In an interview with CNN's Dana Bash soon after he announced his presidential bid, Trump said Obamacare has "got to go" and promised that he'd "repeal and replace" it with "something terrific."

"It's going to be repealed and it's going to be replaced. But I will say this, Anderson, if we don't do something quickly, you're going to have a health care problem like you've never seen before in this country," Trump continued.

After the town hall, Trump affirmed his promise to repeal and replace the Affordable Care Act.

"I was asked about healthcare by Anderson Cooper & have been consistent," Trump tweeted. "I will repeal all of #ObamaCare, including the mandate, period."

July 21, 2016: "We will repeal and replace disastrous Obamacare"

"You will be able to choose your own doctor again," Trump said during his nomination acceptance speech at the Republican National Convention.

Aug. 8, 2016: "One of my first acts as president will be to repeal and replace disastrous Obamacare"

Trump told the Detroit Economic Club his plan to repeal the ACA would save 2 million jobs.

During a rally in Milwaukee, Wisc., in August 2016, Trump called Obamacare a "disaster" and said he would "get rid of" it.

"On health care, we're going to get rid of Obamacare — repeal it and replace it," Trump said at a rally in August of 2016. "It's caused soaring double-digit premium increases and we're going to give choice to patients and to consumers across our land."

Aug. 18, 2016: "We are going to repeal and replace the disaster called Obamacare"

"You'll have much better health care at a much lower cost," Trump told a rally audience in Charlotte, N.C.

That "always gets one of the most incredible applause," Trump said after promising to repeal the law at a rally in Tampa, Fla. "People are dying with Obamacare, it's a disaster."

Weeks before the election in October 2016, Trump promised he would sign an Obamacare repeal bill and "give Americans many choices and much lower rates!"

At a rally in Florida in late October, Trump said repealing Obamacare is going to be "so easy."

"My first day in office, I'm going to ask Congress to put a bill on my desk getting rid of this disastrous law and replacing it with reforms that expand choice, freedom, affordability," Trump said. "You're going to have such great health care at a tiny fraction of the cost and it's going to be so easy."

Days before the 2016 election, in which he pulled out a surprise win, Trump promised to have a "special session" in Congress to repeal Obamacare.

"I will ask Congress to convene a special session so we can repeal and replace it," Trump said at a rally in Pennsylvania. "And it will be such an honor for me, for you and for everyone in this country."

In a tweet on Nov. 2, 2016, Trump said he's going to, "repeal and replace ObamaCare. We will have much less expensive and much better healthcare. With Hillary, costs will triple!"

Jan. 15, 2017: Trump promises "lower numbers, much lower deductibles" for everyone

In an interview with the Washington Post, Trump again promised he would repeal Obamacare while promising "insurance for everybody."

He also promised to go after pharmaceutical companies for drug pricing.

"They're politically protected, but not anymore," Trump said.

"We are making great progress with healthcare. Obamacare is imploding and will only get worse," Trump tweeted. "Republicans coming together to get job done!"