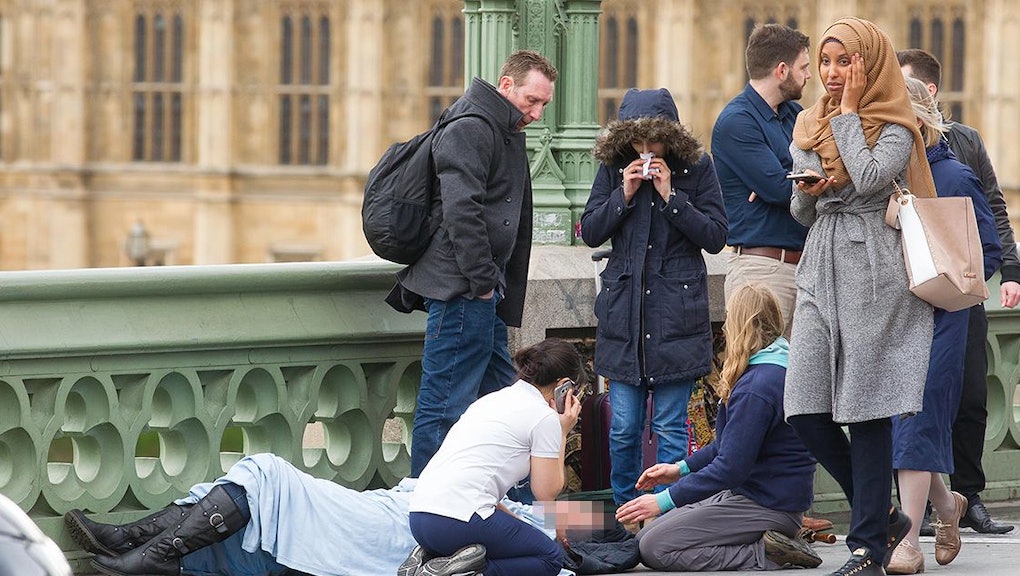 A photograph of a Muslim woman in a hijab walking by a victim of the London terrorist attack outside Parliament Wednesday went viral after right-wing extremists argued that her walking past the injured — rather than assisting — evidenced Muslims are sociopathic and condone violence.

A number of high-profile extremists, such as Richard Spencer and Milo Yiannopoulos, used social media to reinforce the narrative.

But on Friday, both the photographer and the subject spoke out against the far-right's interpretation of the photo — the former of which described it as "misappropriated."

"The people who took on that picture are being rather selective," the photographer, Jamie Lorriman, told Australia's ABC News. "In the other picture in the sequence she looks truly distraught ... personally I think she looks distressed in both pictures."

Lorriman said he took the photograph when it was "quiet and tranquil," after the commotion had died down

"To assume she was ignoring someone is impossible to know; the look on the woman's face, she's horrified, she's in the middle of a traumatic situation," he added. "She probably just wanted to get off the bridge. I feel so sorry for the woman in the picture. If she's seen this, she must feel awful."

The hijab-clad woman, who has remained unnamed, released a statement via Tell MAMA, an acronym for Measuring Anti-Muslim Attacks.

"What the image does not show is that I had talked to other witnesses to try and find out what was happening, to see if I could be of any help, even though enough people were at the scene tending to victims," she said in the statement, posted to Tell MAMA's U.K. Twitter account.

In a separate statement released via Tell MAMA, the Guardian reports, the woman speaks of the emotional toll the photograph and people's response to it has had on her.

"I'm shocked and totally dismayed at how a picture of me is being circulated on social media," she said. "To those individuals who have interpreted and commented on what my thoughts were in that horrific and distressful moment, I would like to say not only have I been devastated by witnessing the aftermath of a shocking and numbing terror attack, I've also had to deal with the shock of finding my picture plastered all over social media by those who could not look beyond my attire, who draw conclusions based on hate and xenophobia."