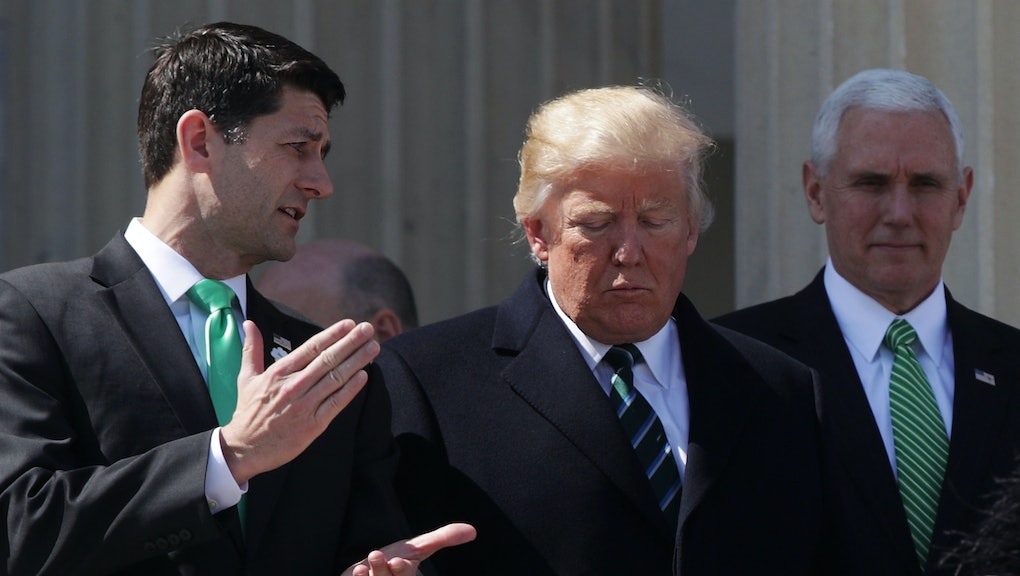 With Trump's health care plan dead, he's moving on to taxes. That's going to fail, too.

As Republicans watch their Affordable Care Act replacement effort fall apart, the White House is already working hard to change the narrative and make sure everyone knows the thing the president really wants to do is tax reform.

There's just one problem with that plan: Republicans are as divided about their tax plan as they were about their health care bill. Even House Speaker Paul Ryan seemed to concede this was the case in his remarks on the demise of the GOP health bill. "We are going to proceed with tax reform," said Ryan, "but this is going to make it more difficult."

"This is how government works when you're in a majority," Ryan added at the press conference. That was a tacit admission that Trump and Ryan hadn't internalized just how hard it would be to wrangle an ideologically rigid party into a supporting a bill seeking to make good on a host of promises. A majority in both houses of Congress and a unified government, in other words, does not guarantee that anything gets done. That's right — it's hard work.

And yet, with this tax reform effort, Ryan and Trump are about to do it all again.

Though there are a number of potential tax provisions that will have to be hashed out in the coming months, there is one tax in particular that Republicans and their constituents in the business community are ready to wage civil war over — the border adjustment tax. And it's going to be tough for Ryan and Trump to come through with a reform on this particular provision.

The border adjustment tax, or BAT, is a plan to tax all imports into the U.S. at 20% while not taxing exports at all. The idea behind the tax is to encourage consumption of American goods, while discouraging consumption of goods made elsewhere.

Some Republicans say the BAT would counteract the unfair tax treatment American exports face in countries with a Value Added Tax, or VAT — a national tax on consumption common in many European countries. However, economists across the spectrum disagree with that characterization.

That's setting up another battle between conservatives, but not along the same lines they went to war over the GOP health care reform effort. Instead of being Ryan-esque mainstream conservatives vs. the Tea Party-inspired Freedom Caucus, the BAT tax fight will fall on lines of where these Republicans hail from. But first, there's the issue of why they would fight over it at all.

It's the special interests, stupid

Republicans like House Speaker Paul Ryan and House Committee on Ways and Means chairman Kevin Brady argue the BAT would help level the playing field for American businesses. But conservative critics like the billionaire Koch brothers say that it will hurt American consumers by making them pay more for imported goods.

Despite these ideological differences, the real debate, like many in Washington, is being driven by special interests — and in this battle, there are titans on both sides. Big exporters like Boeing and car manufacturers love the idea of paying no taxes on the vehicles they sell abroad. But companies like Walmart hate the idea of having to raise their always-low prices on cheap imported goods.

That's why the battle among Republicans will likely be between Republicans who represent these companies in their districts or rely on the different industry groups for donations.

Trump does not fit neatly into either of the preordained Republican camps. He says he doesn't like the BAT because "it's too complicated." Yet, unlike the BAT's opponents in Congress, he has no qualms about hurting consumers. Just two months ago, his press secretary floated the idea of a 20% tax just on Mexican imports to pay for Trump's border wall.

So we may soon have two warring camps of deeply divided Republicans, and an indifferent president who wants to promise big things but isn't willing to fully commit to anything. Sound familiar?

Paul Ryan said there was more agreement among Republicans on tax reform than on health care reform, but it's hard to imagine he didn't think the same thing about repealing the Affordable Care Act. And here we are today. So when, at his press conference, Ryan said of tax reform: "Yes, this does make tax reform more difficult, but it doesn't make it impossible." It's difficult not to take that last bit with a grain of salt.