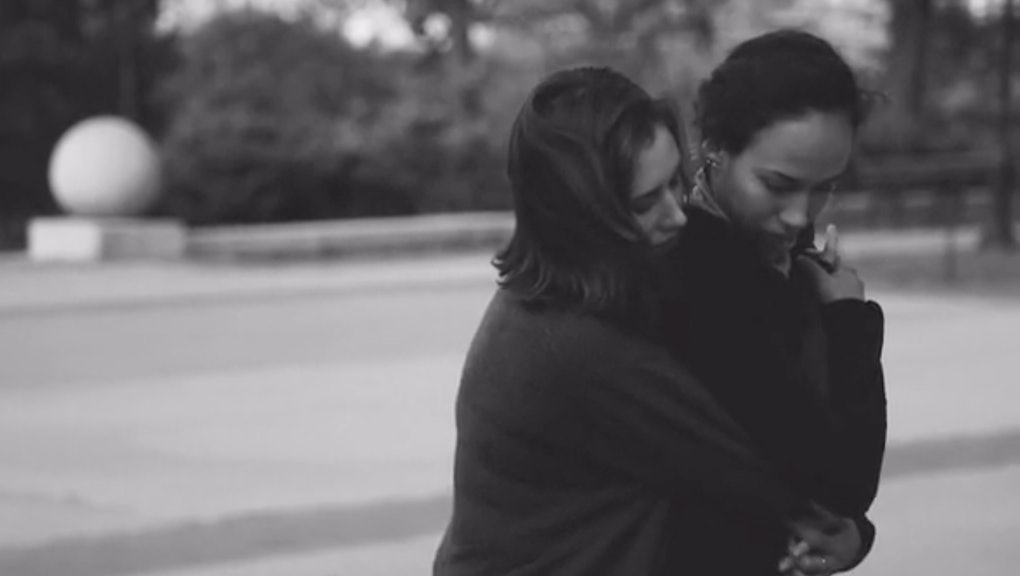 There were 2.25 male actors on-screen for every female actor, the New York Film Academy's analysis of the top 500 films from 2007-2012 found. Less than a third of speaking roles were women, about a third of those women were dressed in sexually revealing clothing and female actors were around three times more likely to get partially undressed than male actors.

Incidentally, more than half of moviegoers are women.

Enter: Shelley Farmer. She is a queer, fierce, female filmmaker who passionately believes the warped representation of different populations in movies — which overwhelmingly favors straight, white men — is a social justice issue. And the 24-year-old is here to radicalize the industry.

How? She's starting with her short film, And the Moon, a love story between two women, which she hopes to finance with her Kickstarter campaign.

"So much of how we think about life and the world is filtered through the culture and art we consume," Farmer said in a phone interview. As a woman — who also happens to date other women — the permeation of a male lens and male gaze has led Farmer to struggle with her own self-perception.

This is what, in part, inspired And the Moon. The short choreographed, original musical, for which Farmer wrote the title song, boasts an all-female cast and follows the journey of two women on a date in New York City: One is the bold aggressor while the other grapples with externalizing intimate desire in the public sphere, compounding the vulnerability of a building attraction.

"Within myself, I'd wrestled with my sexuality ... but the first time I felt I really loved a woman, it made me look at myself in this new way," Farmer said. "Thinking about myself in a truthful way, not refracted through a male lens has been a challenge. Self-image is so informed by the arts, and I'm trying to break out of that male paradigm."

It's a struggle not much eased for women like Farmer through the ostensible advancements of LGBTQ representation in entertainment, which overwhelmingly favors men.

The last three decades have seen a number of films with gay, male leads and love stories — some of which have found places in the Western cinematic canon. Philadelphia for the '90s, Brokeback Mountain for the '00s and Moonlight for the '10s are some of the first that come to mind. Each was critically acclaimed and won Academy Awards.

Now think of the equivalent for gay women. If you can't, it's because there aren't any. Yes, there have been a few films in recent decades featuring sapphic love, but no blockbusters, no Academy Award winners and the number of those films pales in comparison to the number of films featuring gay men — even as side characters.

Media-monitoring organization GLAAD's analysis of 2014 major studio releases found that of LGBTQ characters, 65% were gay men, 30% were bisexual and 10% were lesbian. And of those characters, overall, 68% were men.

"I wanted to be able to make a romance film, but I didn't want it to render the female characters as existing only in relation to men."

This is why it was important to Farmer that her film tell the story of romantic entanglement between two women. "So often women's relationships are flattened out on the screen and exist only in relation to men," she said. "I wanted to be able to make a romance film, but I didn't want it to render the female characters as existing only in relation to men."

Farmer added: "It was important to me that it was the woman who was aggressive and perusing someone romantically rather than being pursued in this passive role."

The profound gender inequality exists on-screen and off. Even one of the most high-profile lesbian-themed films, Blue Is the Warmest Color, singular in its recognition, was directed by a man.

"It appears to me that this was what was missing on the set: lesbians," Julie Maroh, author of the graphic novel upon which the film was based, wrote at the time.

Despite the well-documented disparity, the percentage of women employed behind the camera is not improving — in fact, in 2016 it shrunk by two percentage points from the previous year down, to the same numbers as 1998, the Center for the Study of Women in Television and Film found.

For the top 250 domestic-grossing films, women only made up 17% of all directors, writers, editors, producers, executive producers and cinematographers.

While Farmer's film features an all-female cast, the majority of the crew will be comprised of men. This is partly due to limited resources, but Farmer says she would still include men, even with an unlimited budget.

"There is something to be said for having men involved in telling women's stories," she said. "When we look at the consumption of stories, so often, women's work gets pigeonholed as only appealing to or suitable for a female audience, so I think having men involved in the telling of women's stories — but who aren't dictating them — is very important."

"I think having men involved in the telling of women's stories — but who aren't dictating them — is very important."

Responding to this inequity in culture with creative endeavors that only invite women to be involved will not tackle the source of this problem, Farmer contends.

"I want to make a film that has special resonance, I want it to be truthful to women's experience," she said. "I can only hope that if we're able to make and fund this film, it might help some men recognize women's inner lives are just as rich and just as complicated as their own."