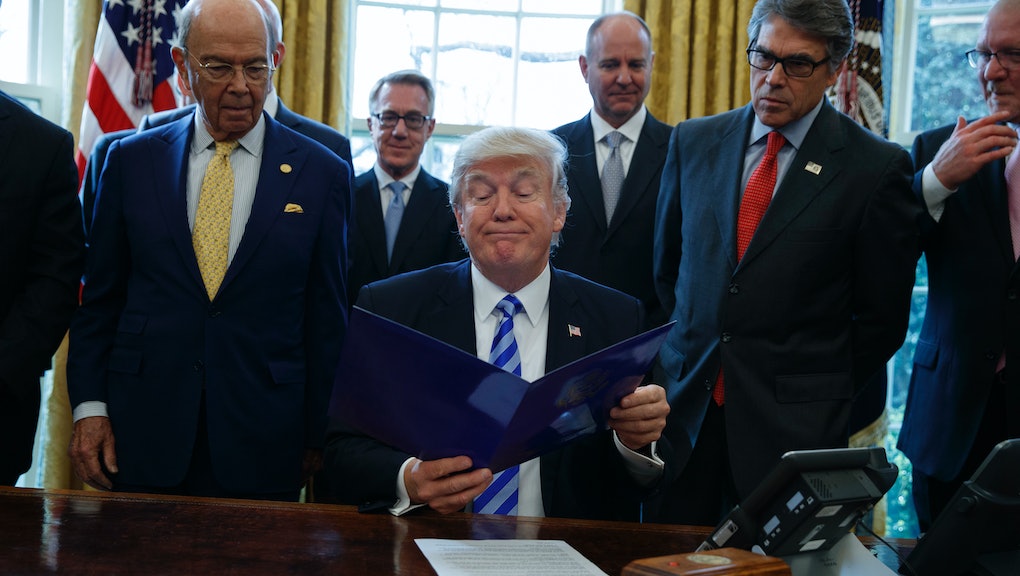 The Republican Party is in nearly full control of our government — House, Senate and executive branch. But President Donald Trump is continuously running into checks and balances his administration might not have anticipated: voters, courts and good ol' party politics.

Those checks are toppling every major item on the agenda that made Trump so popular among his base.

To make good on his call for a "total and complete shutdown" of Muslims entering the United States, Trump put out an executive order preventing citizens of seven Middle Eastern countries from entering the country.

Within hours of coming into effect, the protests erupted at airports across the nation. As immigration lawyers fought furiously to locate detainees and get them representation — some with green cards who were being coerced to sign away their legal status — thousands of protesters were met with police lines, pepper spray and the threat of arrest.

On Jan. 28, a U.S. District Court Judge put a stop to the ban. So Trump revised the travel ban, and put out a new version in the first week of March.

And then, earlier this month, a judge in Hawaii struck that ban down, too, citing the comments of Trump and his closest advisors as evidence that the new ban was just a revamped version of the old ban.

In response, conservatives vented their frustration and threatened to boycott visits to Hawaii, with which the people of Hawaii are completely fine.

Trump campaigned on a promise to repeal the Affordable Care Act to rapturous applause. Democrats wrung their hands — with a Republican-controlled government and the ACA being unpopular enough, it seemed like a possibility.

And then Republicans debuted their alternative plan, which would leave tens of millions of Americans without health insurance. It was astoundingly unpopular, with only 17% voter support.

On Friday, those plans went out the door. The bill was dead on arrival — postponed indefinitely at first, and then declared dead by Trump himself as he meticulously controlled the messaging on the debacle with an afternoon phone-banking tour of the Washington press corp.

The border wall. Tax reform, potentially. A re-evaluation of our NATO obligations, if his rhetoric is to be believed about globalization — or "economic nationalism," as Steve Bannon would say.

But what's clear is that the Trump administration is beholden to more forces than the doomsayers initially anticipated, as long as the populist zeitgeist that helped usher him to power continues to demand accountability for the administration whose hasty decisions delivered these flimsy pieces of legislation.

The Trump administration is 0 for 2.