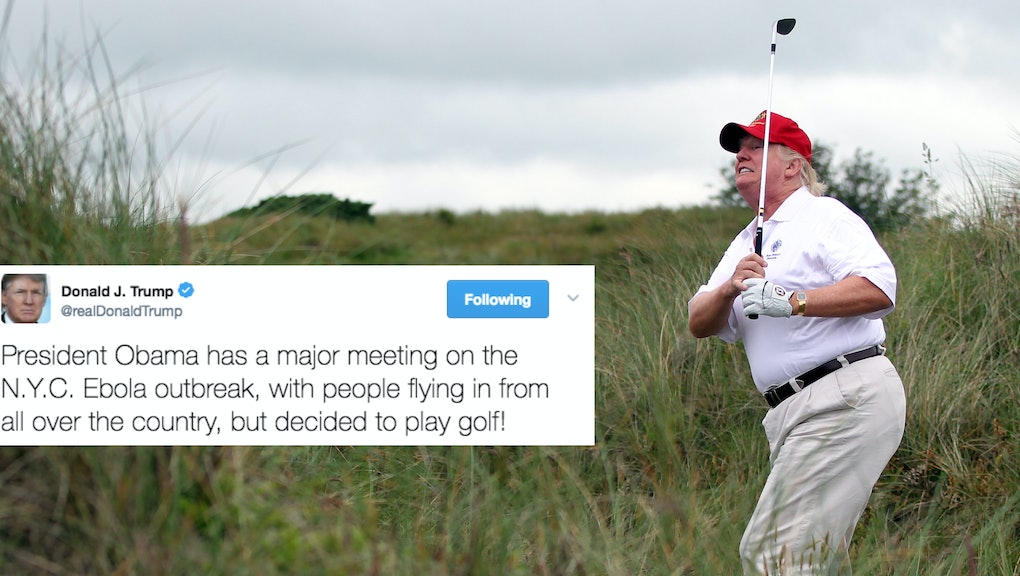 On the campaign trail, President Donald Trump bragged that he wasn't going to be taking any golf trips — not with the weight of the presidency on his back.

"I'm going to be working for you," Trump said at a Virginia campaign stop in 2016. "I'm not going to have time to go play golf."

But after the GOP saw an embarrassing defeat on Friday, canceling the vote on their doomed health care bill, Donald Trump finally had to get back to the golf course. That is, for the 12th time since beginning his presidency just 9 weeks ago, as NBC editor Bradd Jaffy pointed out.

Trump himself isn't a fan of presidents who golf — he tweeted about then-President Barack Obama's golf trips over two dozen times, taking shots at Obama for golfing during important moments in his presidency.

When asked about these trips during a press conference, White House press secretary Sean Spicer said that he uses this time to meet with world leaders and his Cabinet. It's not a vacation, you see. It's strategy.

"How you use the game of golf is something that he's talked about," Spicer said.

For all of Obama's travels, taxpayers spent about $12 million on travel per year. It's been estimated that Trump's trips cost taxpayers $10 million in the first 30 days.