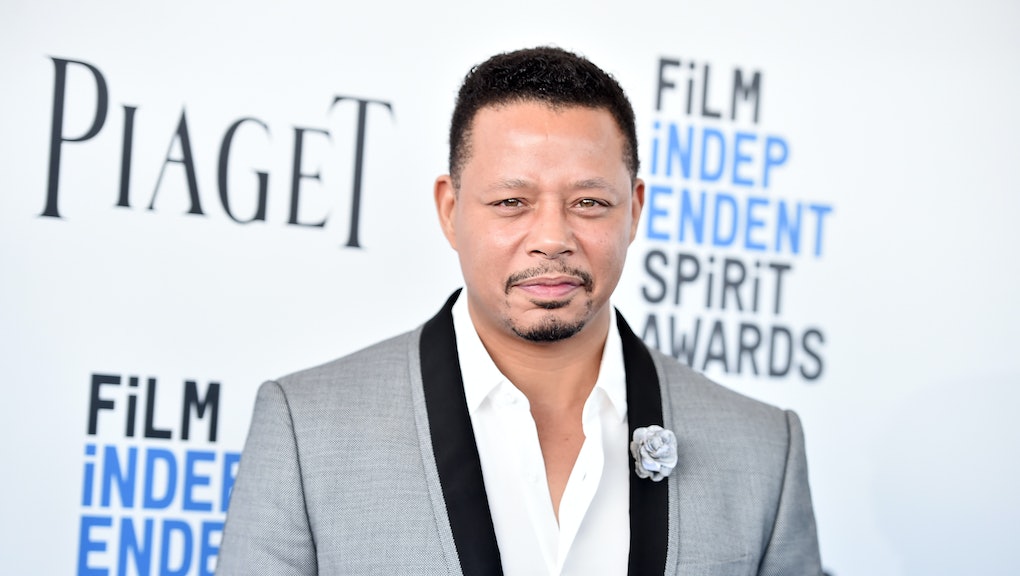 Seemingly out of nowhere, Empire actor Terrence Howard hit Twitter hard with a screed familiar to the men's rights movement on Saturday, launching into a long-winded attack on the domestic violence "double standard" he said allowed women to "assault a man and not reap where they have sowed."

Howard started off with a blanket denial that he had ever abused anyone, moving into a defensive argument that was both ambiguous and highly specific.

It remains unclear what prompted Howard to hop on social media at 5:51 a.m. Eastern on Saturday: While multiple women have accused Howard of assault, some years have passed since the last allegations surfaced. According to Gawker, Howard was arrested in 2001 for assaulting his estranged wife, Lori McCommas, showing up at McCommas' house after a phone argument and punching her twice in the face.

According to 2011 divorce documents cited by the Daily Beast, Howard's ex-wife, Michelle Ghent, alleged Howard began abusing her within a week of their January 2010 marriage. Ghent said Howard punched her in the face during an argument after she found his "secret second cell phone." Howard, however, claimed it was Ghent who hit him during the altercation.

During the year they were married, Ghent said the actor consistently harassed and threatened her — and that her physical injuries "required medical attention" in 2010, when Howard was filming Winnie in South Africa.

In January, Ghent dropped a lawsuit she filed in 2015 that alleged Howard attacked her during a trip to Costa Rica in 2013. The complaint said Howard "punched her on the left side of her face" and "strangled her for several seconds," according to E! News.

These incidents do not comprise a comprehensive history of assault allegations made against Howard, but they do offer some context for his Twitter tirade, which specifically mentioned the punching accusations. An 11:22 a.m. tweet from Howard suggested more accusations might be on the way:

It's unclear which "her" Howard is referring to, as a cop quoted Howard in a police report as admitting he "broke the door down and hit my wife." But whomever his target, one thing is irrefutable: Intimate partner violence is overwhelmingly perpetrated by men against women, according to the World Health Organization. The argument that men are just as likely to be abused by a female partner is a foundational tenet of the men's rights movement, but it doesn't hold water.

The sentiments contained within Howard's tweets ring familiar. Men's rights activists like to say women lie about being abused or exaggerate their claims. But even if a high number of domestic violence victims recanted their claims, that doesn't mean they filed a false report. Much of the time, dropping charges indicates the abuser used emotional appeals to elicit sympathy from their victim, manipulating them into walking back their story. When it comes to domestic abuse, it's generally believed victims lives' are in the most danger when they decide to escape, the Guardian reported in 2014.

With regard to Howard's "double standard" claim, women are more likely to be domestic abuse victims, according to statistics from the National Coalition Against Domestic Violence. Women are more likely than men to be sexually assaulted, stalked, psychologically abused or murdered by an intimate partner. There are certainly men out there who have suffered real abuse at the hands of female partners, but the number of male and female domestic violence victims simply do not compare. Howard's reference to an "eye for an eye" is an unacceptable argument.

Editor's note: To speak confidentially about a domestic violence situation, contact the National Domestic Violence Hotline at 1 -800-799-7233 or the Crisis Text Line at 741-741. Both provide free, anonymous support 24 hours a day, seven days a week.