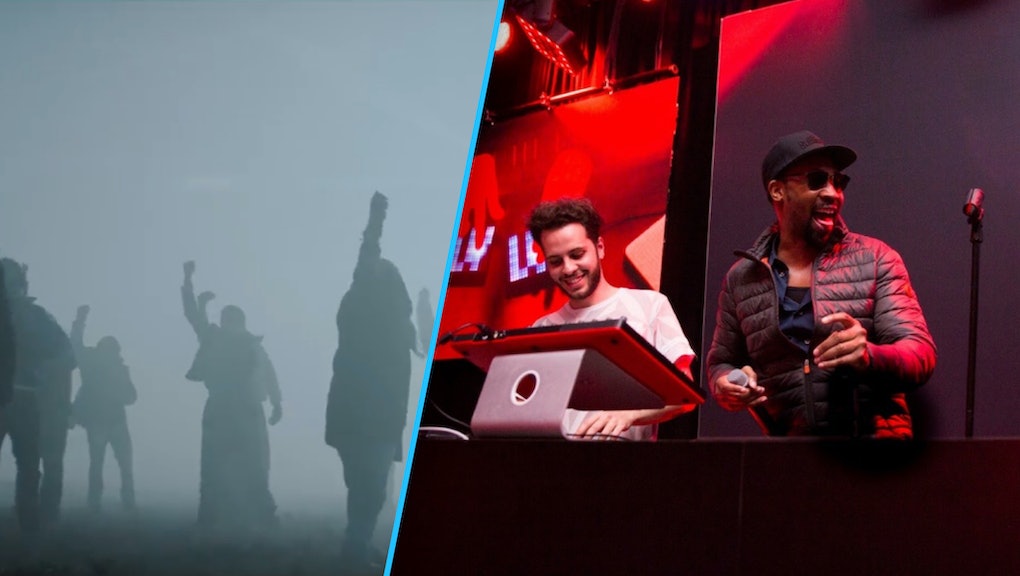 It's been roughly six years since the Syrian refugee crisis began. In that time, 11 million lives have been displaced and hundreds of thousands more extinguished entirely. Governments, plagued by infighting, have abandoned values and backtracked on promises to help survivors. It's left many concerned parties with doubts, questions and a disconcerting view of an uncertain future.

"I don't understand how you could ban a man from a land that was said to be a beacon of light for men escaping the plight of tyranny," Wu-Tang Clan's RZA raps to open "No Refuge." It's a new track produced in collaboration with Italian electronic music sibling duo Parisi, debuting Monday on Apple Music's Beats 1 radio. The line sets the tone for a heart-wrenching examination of the cultural contradictions that have allowed this conflict to spiral from civil war into a global humanitarian crisis.

It's come paired with a haunting video, following a group of would-be refugees trudging through a featureless expanse, striking determined poses to the song's blues-inflected, synthesized wails.

According to a press release, all of the track's proceeds will go toward supporting the United Nations Refugee Agency, a global organization dedicated to supporting disposed people around the world.

"Every year, especially in the summer, refugees from the Middle East and north Africa cross the Mediterranean from north Africa and land in southern Italy — not far from our home town of Salerno," Marco and Jack Parisi, the brothers behind the song, said via email. "As a country and as a family, we do our best to help and welcome everybody, but it becomes more difficult every day to manage the situation properly."

Sympathy alone is not enough, the brothers explained. "The refugees need support from people like us and from institutions."

RZA's verse helps amplify this goal, with an additional aim of underscoring the hypocrisy of the anti-immigrant policy Trump's America is currently pursuing.

"How can we go from one image of Barack Obama, one of the best images our country has put forth, probably ever — to this now?" RZA said, nodding to one of the song's verses:

"I'm an innocent immigrant trying to emigrate/ To the land built by immigrants/ Where the face of a former slave/ Became the face of the president."

"That's Biblical. That's Gladiator; that's Spartacus, Ben-Hur," RZA said. "And what's our follow-up to that? This guy right here. A smart businessman, I guess, an icon in this country, I mean Wu-Tang used to talk about him, like we were the black Donald Trump."

He emphasizes that he wants to see America thrive under Trump, but to do that the nation has to remember its values — that immigrants made this country great. His bars are tough love.

"I'm a patriot, bro," he said. "I defend my country verbally, musically, my family's here and all that. But it's like defending your kid when you know when your kid was wrong."

Parisi and RZA both detailed the ways they feel music is an effective medium to get to the heart of the issue, to allow individuals to see past their prejudices to what's truly at risk in today's political climate.

"My last four bars express how I'm feeling from this side of the table: 'Let's make America great, but not a place of bigotry, racism or hate,'" RZA said. "Let's realize that it's man himself — man, woman and child, the people — that's the true resource. Let's utilize that and cherish that and nourish that.

"I hope those that hear the song will be inspired to take a look, say something if they want to say something, or simply just listen and be reminded."

Watch the full video for "No Refuge" below.