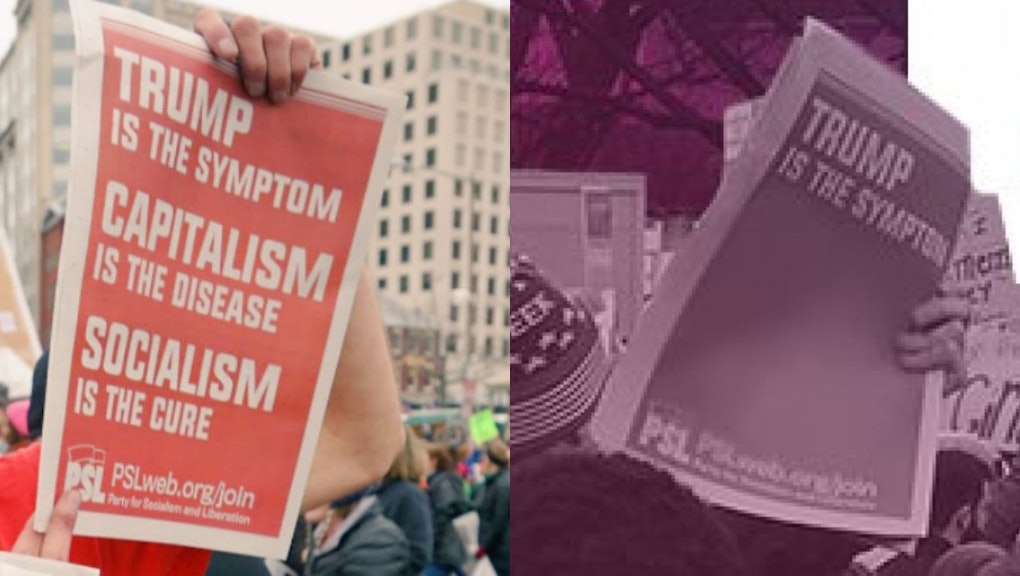 If you can't rid the Democratic party of socialism by beating it in the primaries, sometimes the only thing left is Photoshop.

In the wake of Republicans' failure to pass their Obamacare replacement bill — a GOP a debacle that has more to do with bad politics and the needs of the Republican base than with partisan resistance — the Democrats tweeted out this message of persistence:

But as one Twitter user pointed out, the protest photo appeared to have been digitally altered. One protester held up a copy of a free socialist newspaper called Liberation News, put out by the Party for Socialism and Liberation.

The message in full read: "Trump is the symptom. Capitalism is the disease. Socialism is the cure."

The edited image simply reads: "Trump is the symptom."

The Democratic National Committee acknowledged the mistake, telling Mic in an email the tweet "violated DNC policy and we regret the error."

But for Rachel Silang, the PSL's national social media coordinator, this minor snafu is just further proof that Democrats are resisting the pressure from their base to embrace change.

"The base of the Democrats are pushing forward and exploring new options," Silang said over the phone, pointing out that socialist Bernie Sanders is now the most popular politician in the country. "For them to edit out the words 'capitalism' and 'socialism' is just so telling about how disconnected they are from young voters, and even older voters."

Democrats have cribbed from PSL in promoting their platform in the past, as well. During the 2016 presidential campaign, Hillary Clinton's camp created an ad promoting women's rights that included a clip from a rally for Peta Lindsay, a community organizer who ran for president on the PSL ticket in 2012.

Lindsay is staunchly anti-Clinton, and called the use of the clip "disgusting" and a coopting of feminist principles while speaking with WMNF.

"That's incredible, insane entitlement," Lindsay told WMNF during the campaign. "Insane arrogance to take credit for basically all of the hard work that all of the women organizers in this country have done for generations and say that it's all in support of her."

As Silang pointed out, one of the troubles in exorcising leftist messaging from protest and rally footage is that since Trump's election, socialist and leftist organizers have often been at the center of anti-Trump protest organizing, often breaking away from the DNC's focus on issues like Russia toward things like immigration, health care and the minimum wage.

"It's incredible to see that our energy we have is taken and repurposed, without wanting to engage in our politics," Silang said.

And although they were able to remove the anti-capitalist messaging from the image, a hammer and sickle still managed to make it through:

If the Democrats want to erase the steadily increasing influence of the leftists on their base, it's going to take a lot more than some airbrushing.