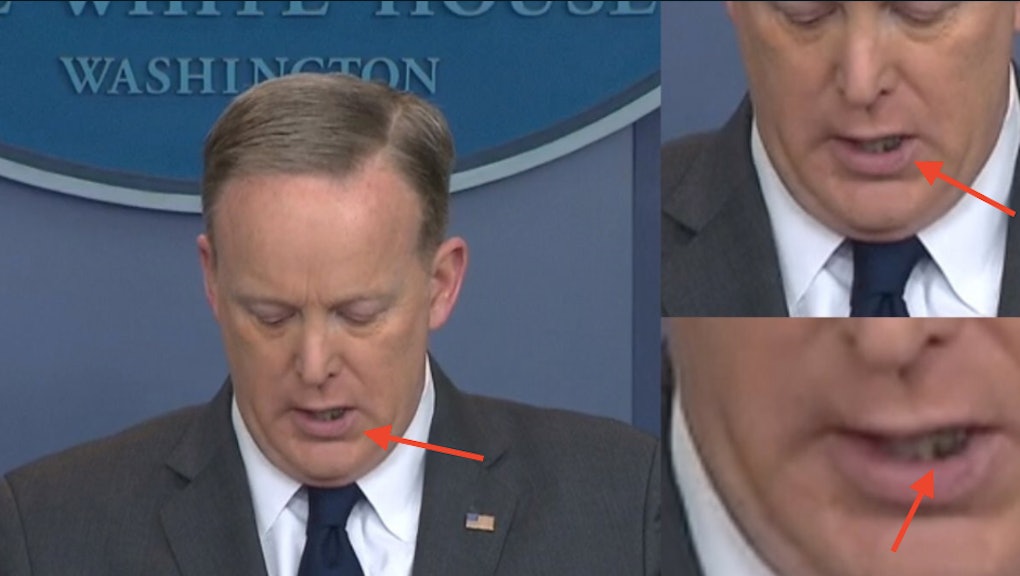 Think of a time you were told by someone — a coworker, a friend or a partner — that you had a huge chunk of food in your teeth. Remember that split-second of abject humiliation. Everyone saw. You're finished in this town.

Remember that huge sigh of relief once you'd fixed it. Nobody else would see. You may be able to remain in this town after all.

Now imagine you're White House Press Secretary and you just addressed the public with a mystery chunk in your teeth. And even after you remove it, there's still video. And screenshots. And memes.

That's the kind of Monday Sean Spicer is having.

If you watched Spicer's press conference today, you might not have noticed anything out of the ordinary: he gave his daily briefing on the state of the Trump administration all while staying calm and collected despite, you know, everything.

To Spicer, it probably felt like business as usual. But many people watching were transfixed on what appeared to be a huge piece of spinach (or other such leafy green) stuck between his bottom teeth.

Needless to say, it became a viral moment. Twitter ended up having a field day with Spicer's #SaladGate:

Fairly or unfairly, this isn't the first time Spicer has been critiqued for his appearance before: Just days after inauguration, Trump reportedly forced him to wear better fitting, darker suits, according to the Washington Post. In early March, Spicer wore an upside-down American flag pin — which is, according to federal law, a distress signal — at a press conference.

As potentially embarrassing as this may be for Spicer, it isn't nearly as stomach-churning as the white particle that danced on Ted Cruz's lip during a live GOP debate.

Or the way he got rid of it — which, once seen, cannot be unseen.