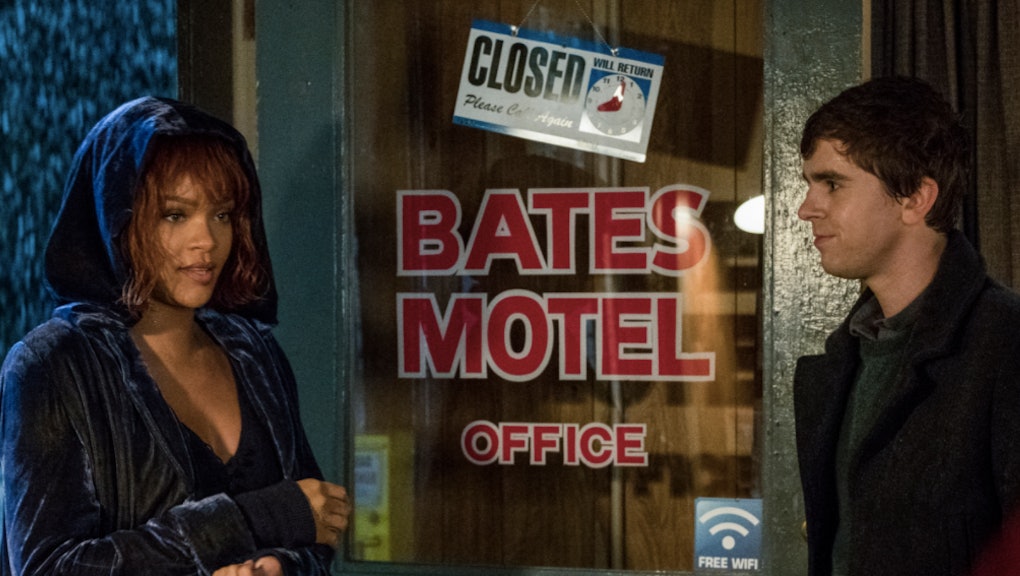 Those who have watched Alfred Hitchcock's 1960 thriller Psycho know very well what happens to Marion Crane. But does Rihanna's version of the character meet the same fate in Bates Motel? Episode 6 of season 5 explores just that.

Check out the similarities — and the one big difference — between Bates Motel and Psycho in episode 6, "Marion."

When Sam Loomis first checked into the Bates Motel, he used a fake name — David Davidson. Marion Crane does the same thing when she checks in. She signs the name "Marie Samuels" in Norman's log book. The name Marie Samuels is also what Marion signs in Psycho.

A late-night snack in the office

Norman offers to make Marion a ham sandwich after checking her into her room. While making the sandwich up at the house, Norman fights with Norma and accuses her of not being real. It seems like he's finally realizing that he's gone "mad." However, while sitting with Marion in the motel office, he tells her that he lives at the house with his mother.

The motel office dining scene is just like the scene from Psycho. The only difference is that in the film Marion overhears Norman arguing with his mother. Norman's argument with Norma in Bates Motel happens away from Marion, up at the house.

The famous Psycho shower scene with Marion Crane finally played out on Bates Motel — but it didn't exactly follow the original script.

After getting into an argument with Sam on the phone, Marion decides to take a shower. Norman watches her undress from the peephole in the office and the chilling music begins to play as Marion lets the hot water wash over her. However, it's Marion who pulls back the shower curtain, not Norman. In fact, Norman's not even in the room. She puts her clothes back on and goes back into the motel office to ask Norman for Sam Loomis' information. It's there that Norman gives her the Loomis' address and reveals that her beloved boyfriend is actually married.

The fate of Marion Crane

Marion goes to Sam's house and has a meltdown when she sees him with Madeleine. She smashes his car windows and returns to the motel. But Marion doesn't stay. Fearing what he might do to her, Norman encourages her to leave. After spotting the money in her bag, Norman begs her to use the opportunity to ditch Sam and start over.

"Get out of here while you can," he tells her.

He advises her to get rid of her car, her phone and anything else that can be used to track her. Marion takes his advice and leaves after an awkward embrace.

Marion dodged a bullet — or rather a blade — and mother is not happy.

The shower scene — with a twist

While Norman's alter ego is not thrilled that he let Marion leave, another guest arrives at the motel. Sam is looking for Marion and enters her abandoned room to find her things strewn everywhere. He leaves a message apologizing and promises that he'll be at the motel waiting for her to come back. What he doesn't know is that she'll never get his message. She threw her phone out the window of her car.

Norman is furious to see Sam, and mother fuels his hatred for the man. Sam reminds him of his father — someone who uses women and treats them like trash. Norma encourages Norman to do something about it.

Episode 6 of Bates Motel concludes with Norman entering the motel room while Sam is in the shower. He pulls back the shower curtain and stabs Sam repeatedly. Blood splatters everywhere, and Sam collapses onto the bathroom floor after pulling down the shower curtain — just like in Psycho.

"Oh, mother," Norman says when he realizes Sam is dead. "What have I done?"

Besides Sam being the victim instead of Marion, the scene is almost identical to the movie. The only other difference is that in Psycho Norman is dressed as his mother when he commits the crime.