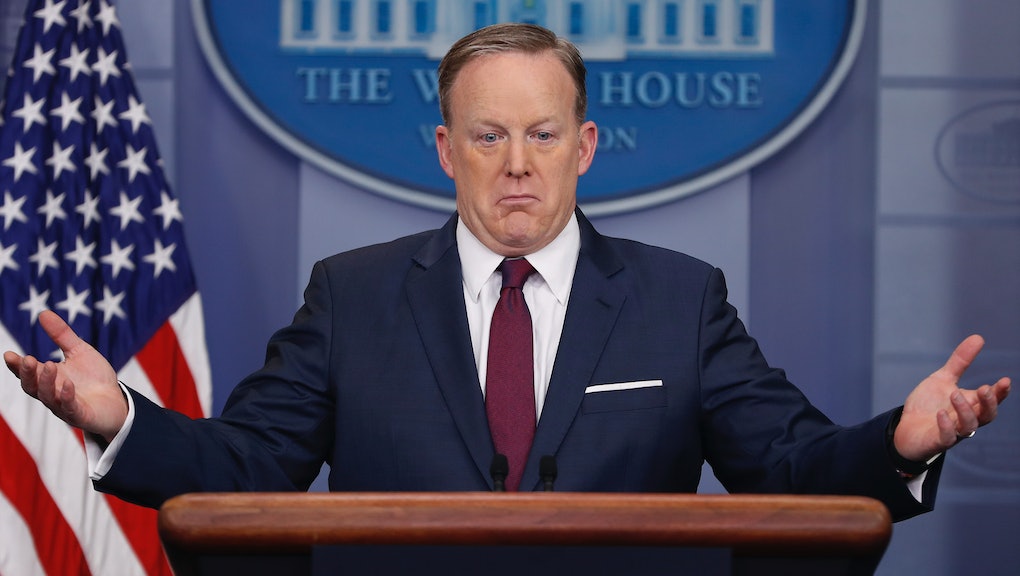 Instead of denouncing hate crime murder, Sean Spicer implied conservatives are the victims

Instead of soundly denouncing white supremacy and racism, Spicer seemed to evade the question, instead turning again and again back to the cases of hate crimes in which, he said, there was "an immediate jump to criticize folks on the right and to denounce people on the right."

That's right, the real victims of hate crimes are the conservatives who are unfairly blamed.

On Monday, journalist April Ryan asked Spicer about Caughman's killer, James Jackson, the "white supremacist who went to New York and targeted a black man," as Ryan put it to Spicer.

"What is this White House saying about this obvious apparent hate crime?" Ryan said. Spicer first answered by avoiding discussing the murder at all — saying instead that President Donald Trump had discussed race with the Congressional Black Caucus. When Ryan pushed him to speak specifically about Caughman's death, and about an apparent rise in hate crimes, Spicer still managed to avoid mentioning the fact that a man was murdered by an apparent unabashed white supremacist.

"Two issues, number one, I think hate crimes, anti-Semitic crimes, should be called out in the most reprehensible way. There is no room for that in our country," Spicer said. He continued:

But I think that there's one other piece to this, April, that I just want to be clear on. While we unequivocally, no doubt about it, need to call out hate, anti-Semitism where it exists, where's another thing we have to do. And in your case in particular, I don't know all of the details, and I don't want to reference any specific case. But I think we saw this the other day with some of the anti-Semitic behavior that was going out with respect to people of the Jewish faith ... Is that we saw these threats coming in to Jewish community centers and there was an immediate jump to criticize folks on the right and to denounce us, denounce people on the right ... And it turns out, it wasn't someone on the right. And the president said from the get-go "I bet it's not someone" and he was right.

Spicer was referring to the recent arrest of a 19-year-old Jewish Israeli teen suspected of calling in a number of bomb threats to Jewish Community Centers and other Jewish institutions in the U.S. The teen's motives are not yet known.

But while Spicer was quick to defend the "people on the right" who he said were unfairly "denounced," he declined to condemn Jackson, who allegedly came to New York City to hunt and kill black men. Jackson reportedly said on Sunday that he wished he had murdered "a young thug" instead of 66-year-old Caughman.

When Ryan asked him one more time to address Caughman's murder specifically, Spicer yet again turned his answer back to conservatives being falsely blamed.

"I do think there has been a rush to judgment in a lot of other cases, in particular, the anti-Semitic discussion where people have jumped to the conclusion of denouncing people on the right," he said. "In that particular case, we saw that the president was right and this rush to judgment by a lot of folks on the left was wrong and none of them have been held to account on that."