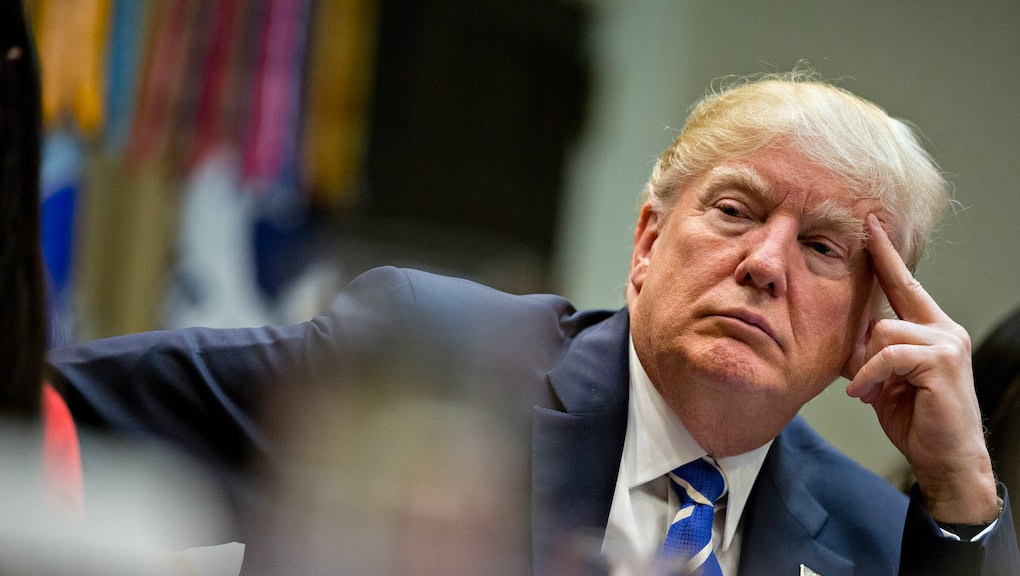 President Donald Trump embarked on one of his signature twitter rants on Monday night, in which he bashed the conservative flank of the House Republican caucus and sought to divert attention away from an investigation into his campaign's alleged Russian ties by calling it a "hoax."

Trump began the spree by bringing up a debunked theory about Hillary Clinton and Russian uranium — trying to pin blame on the Democratic nominee he defeated 138 days ago.

He later called the entire inquiry into his campaign's alleged ties to Russia a "hoax" – the same day it was announced that his son-in-law, Jared Kushner, was set to answer questions from the Senate Intelligence Committee on the Trump campaign's possible collusion with Russia.

In his third tweet, Trump went on the attack against members of his own party, whom Trump and House Speaker Paul Ryan blame for the embarrassing collapse of the GOP's Affordable Care Act repeal plan.

Trump's decision to go after both Republicans and Democrats in his tweet storm is a perplexing strategy for a president who will need every vote he can get as he begins to embark on a challenging quest to reform the country's complicated tax code.

By attacking Democrats, Trump is further pushing away a party that is already wary of working with him on any policy proposals.

And by going after the House Freedom Caucus, he's asking for trouble from a large group of House Republicans that's already showed it can scuttle legislation when it's not up to their standards.

Yet Trump didn't see his attacks that way.

In yet a fourth tweet, he assured the country that Democrats will make a deal with him — despite baselessly attacking Clinton minutes before.

"The Democrats will make a deal with me on healthcare as soon as Obamacare folds — not long," Trump tweeted. "Do not worry, we are in very good shape!"