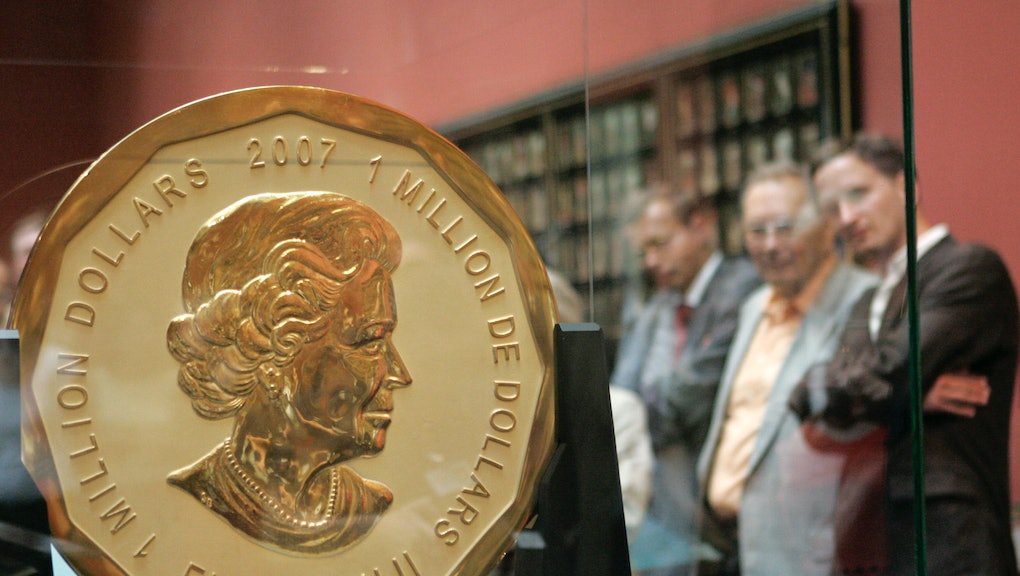 If you thought Ocean's Eleven was impressive, this real-life heist will knock your socks off: Known affectionately as the "Big Maple Leaf," an enormous 220-pound Canadian gold coin worth around $4.5 million was on display in Berlin's Bode-Museum — until the early hours of Monday, that is, when it mysteriously disappeared.

The coin — the biggest on earth, according to Guinness World Records — "was stolen last night," Markus Farr, a near-dumbstruck museum spokesman, told Reuters on Monday morning. "It's gone." As of Tuesday, more than 24 hours had passed, but authorities had yet to name any suspects.

Whatever mastermind(s) led the robbery left scant evidence: just some smashed bulletproof glass, which had encased the missing coin, and a lone ladder. The ladder was found inside the museum under a window that sat about 12 feet above railway tracks running behind the Bode.

"Based on the information we have so far we believe that the thief, maybe thieves, broke open a window in the back of the museum next to the railway tracks," police spokesman Winfrid Wenzel told Reuters. "They then managed to enter the building and went to the coin exhibition."

Wenzel added: "The coin was secured with bullet-proof glass inside the building. That much I can say."

Everything else in the museum appeared untouched, so, with more than half a million pieces in the Bode Museum's "Coins and Medals" collection, it's safe to assume the Big Maple Leaf was a very specific target.

Neither Wenzel nor the Bode reportedly offered details about the museum's security system and whether it failed to do its job. But police were made aware of a break-in at approximately 4 a.m. local time on Monday, the New York Times reports.

The Royal Canadian Mint produced the Big Maple Leaf in 2007. Why? "Because we can," its website states. There are five of these magical coins in existence; replicas were made after a number of interested buyers came forward. The coin is embellished with the country's signature maple leaf on one side and iconic monarch Queen Elizabeth II on the other.

It's more than one inch thick, more than 20 inches in diameter and weighs roughly as much as Arnold Schwarzenegger or Dwayne "The Rock" Johnson — making it a cumbersome item to whisk away.

While its face value is $1 million Canadian dollars (about $750,000 U.S. dollars) the amount of gold it contains and its remarkable 99.999% purity makes it actually worth closer to $4.5 million U.S. dollars. The fear now from some experts is that the Big Maple Leaf will be melted down into lots of Little Maple Leaves in order to sell off the gold.

As confounding as the heist may be, it may enter the history books as just one of many astonishing robberies — an arena filled with intrigue, mystery and unintended humor.

Mona Lisa once wandered off, for example: In 1911, Leonardo da Vinci's masterpiece went missing from the its home in the Louvre in Paris. A former employee simply walked in, swiped the painting, hid it under his clothes and walked out. For two years, it was a head-scratcher to investigators, who even involved Pablo Picasso at one point. The fun for the Mona Lisa-swiper ended when he got caught trying to sell it in 1913.

And one of the most infamous art heists was in Boston in 1990. Two men disguised as police officers entered the Isabella Stewart Gardner Museum in the middle of the night and told the guards on duty they were responding to a call. After handcuffing the guards, alleging there were warrants for the guards' arrests, the thieves chained them to pipes in the basement and made away with 13 pieces of art.

The stolen art included works by such titans as Rembrandt, Vermeer, Manet and Degas — which were never recovered. The museum currently offers a $5 million reward for any information that could help solve the open investigation and identify the thieves.