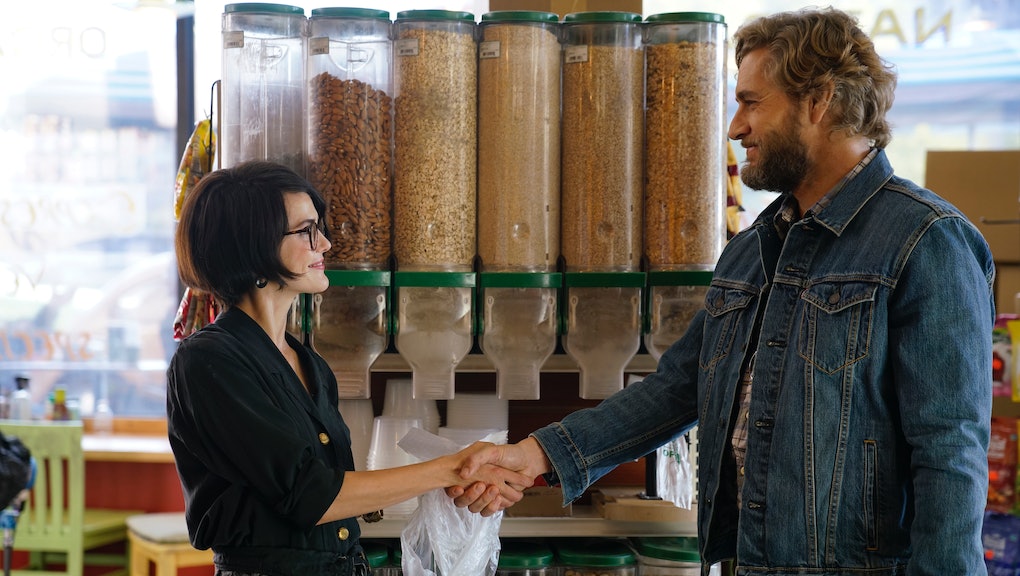 [Editor's note: This recap contains spoilers from season five, episode four of The Americans, "What's the Matter With Kansas?"]

For every exhilarating mission Philip and Elizabeth Jennings are assigned, there are always one or two mundane ones that dovetail the heady jobs. So, it is to be expected that after turning poor Oklahoma lab director Randy into a human pretzel in the last episode, the KGB agents' work would entail more lighthearted fare.

While that wasn't exactly true for the most recent episode of The Americans, "What's the Matter With Kansas?", we were given a bit of a breather that allowed us to finally catch up with some of the more slow-burning story lines of the new season. But since the Soviet starvation plotline is still the ongoing main arc, here's a quick debrief on what Philip and Elizabeth were up to in the episode:

Basically, they're doing what we've seen them do time and again since season one — building relationships with the people who could provide them with crucial intelligence. That means going after employees of a Kansas company called Agricorp, which they learned during their jaunt to Oklahoma is involved in the breeding of those deadly midges. Trouble is, it seems that maybe last year's seven-month vacation wasn't long enough for our seasoned spies, because both Philip and Elizabeth appear to have lost their zeal for the good ol' honeytrap game. To be fair, it's not like their marks are anything to write home about: Philip is stuck wooing a logistics-loving introvert, while Elizabeth is saddled with staging meet cutes at a health-food store and making small talk with "the carob, gorp-eating, hiking expert of Topeka" over trail mix recipes. Yawn.

It's only Elizabeth's anger toward what is happening in the Soviet Union that allows her to maintain her efforts with the crunchy, denim-loving scientist Ben Stobert. In the episode's final line of dialogue, she conveys her disgust to Philip over her current target: "The guy is laughing while he's trying to starve an entire country."

But despite whatever signs of burnout Philip and Elizabeth are demonstrating after nearly 20 years in the United States, they can take comfort in the knowledge that whether they like it or not — and more importantly, whether she likes it or not — Paige is making up for their lack of enthusiasm in spades.

Now that there is a little wiggle room in the narrative, The Americans caught us up on the certainly-not-dormant Pastor Tim subplot in "What's the Matter With Kansas?" (in short: The Jennings still need to keep an eye on Paige's clergyman and his blabby wife, Alice, because they know Philip and Elizabeth are really Mischa and Nadezhda). Paige spends a quiet evening at the religious duo's home babysitting their infant daughter, but instead of curling up with a good book, like Tim's copy of Capital by Karl Marx, she opts for some serious snooping, particularly in the pastor's diary.

(Side note on Tim encouraging Paige to read Marx's insights on "class and poverty": Could this be the biggest clue to date that the biggest thorn in atheist Elizabeth's side is, in fact, KGB after all?)

What's so great about Paige's decision to be proactive here, is when she reports back to Elizabeth in another one of their great kitchen scenes, she demonstrates a level of confidence that we haven't really seen yet. Ironically, this is exactly the characteristic that makes Elizabeth such an excellent spy, even though all it does is trigger anger (in reality, fear) in the veteran KGB agent. Of course, because Paige can never win, Elizabeth chastises her for going all Carrie Mathison on Tim and Alice's goody drawer and desk: "You can look different after you've done something like that. You can sound different," she warns, despite praising her daughter for doing something "smart" and "brave."

That's the whole problem with Paige being "trained" in such an intermittent manner. She pretty much spent all of season four being forced to spy on Tim and Alice, but now when she takes it upon herself to do what her parents have been pressuring her to do anyway (and it's not a bad thing that she did — apparently Tim likes to write about parishioners in his diary), she gets reamed for it. Also, Paige's intentions came from a good place: She was trying to find the contact information for the lawyer Alice claimed she told about the Jennings' true identities.

But Paige's lone-wolf activities may have been what Elizabeth needed to see all along. The teen stands up to her mother in a way that I think was necessary, telling Elizabeth, "I'm sorry, but I was there, not you." And upon further reflection, later in the episode, Elizabeth even goes so far to look at Paige's actions as a good thing: She floats the idea to Philip that if they found some good dirt on Tim and one of his parishioners, they could blackmail the, well, bejesus out of him.

The episode title "What's the Matter With Kansas?" may initially bring about thoughts of America's heartland, but it will always be remembered for making some decent headway with the intercontinental Stan Beeman/Oleg Burov bromance. After Oleg received an audio tape of him disclosing traitorous information about a fake Russian defector to Stan in last week's episode, he's been living in constant fear that he'll either be forced to work for the CIA, or that his actions will be discovered by the KGB.

I mentioned in last week's recap that Stan is probably his only ally at this point, and that turned out to be partially true. In an effort to get the CIA to leave Oleg alone, Stan put his entire career and reputation on the line by admitting to the deputy attorney general that he murdered junior KGB agent Vladimir Kosygin in season one. His confession came with a loaded ultimatum: Stop trying to turn Oleg, or Stan will go public with his story, essentially telling the world that the United States government kills innocent people.

Stan may have saved Oleg, but what will be the consequences for his own future now? Does this mean he's taken the next step toward becoming a Russian asset? The ambiguity is what makes this story line even juicier than, dare I say it, Philip and Elizabeth's current missions.

And I wouldn't be so quick to say that Oleg is out of danger yet anyway. He confided in his mother, Yelena, that he's in serious trouble (without providing details) with both the U.S. and Soviet governments, and given her survive-at-all-costs advice, it sounds like the KGB agent still has a tough road ahead of him. Though that wasn't the most revelatory part of their conversation: Throughout his life, Oleg has enjoyed a cushy existence thanks to his father's position as a high-ranking Soviet official. But as it turns out, Yelena hasn't always had it so easy. Keeping the details scarce, she discloses that after she was married, she was sent to "a camp" for five years. It was there she "found ways" to survive, and now he must do the same.

Yelena's perspective is a bleak one, but there is no doubting she is one of maybe two allies Oleg has at this point. I'd take the tough love advice if I were you, Oleg.

Anyone who's watched The Americans this long knows that the more limited the screen time, the more certain characters are just a powder keg waiting to explode. So get ready, because now that Philip's long-lost son, Mischa, has landed at New York's JFK airport, and his other long-lost son, Henry, has made his first on-screen appearance since the season premiere, things are likely going to get messy very, very soon.

— I'm thinking Alexei Morozov is going to be this season's Young-Hee: In that single scene at the bar, you can see Philip is starting to bond with his mark (far more than the sad Diedre Kemp in Kansas), and that, like Elizabeth last season, he's really going to regret losing Alexei's friendship when the time comes. He may not be as vocal about it, but Philip has a deep affection for the United States, just like Alexei, so there's a bond there.

—The Americans is totally on to the fact that it's running out of excuses for keeping Henry hidden. A brief mention that the Jennings' son is "with Doug" in one scene was even tagged with the lampshading acknowledgement that we hadn't "heard that name in a while."