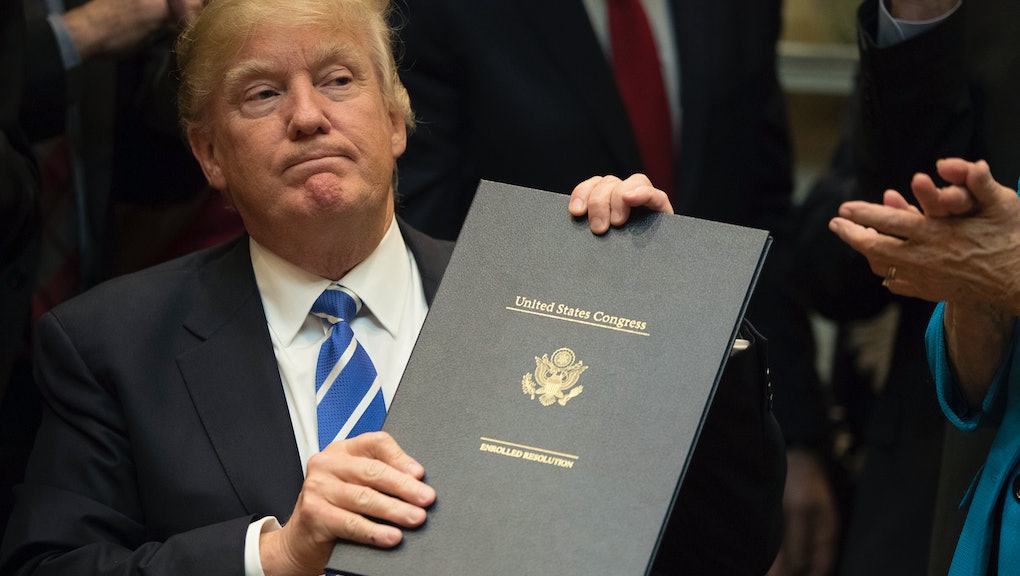 President Donald Trump promised Americans that if he were elected president, there would be so much winning "you may get bored with the winning."

Yet exactly two-thirds into his first 100 days as president, Trump has had zero legislative wins from the Republican-controlled Congress — with little hope of achieving a legislative victory in the remaining 37 days.

Here's a quick overview of where No. 45 stands on wins:

One of Trump's biggest legislative promises — to repeal and replace the Affordable Care Act — crashed and burned in spectacular fashion in the House last week, after House Republicans could not agree on a replacement plan despite seven years of promises that they had a fix.

Trump now says he wants to move on to tax reform. But he's yet to release his plan to amend the country's complicated tax code. And with Congress about to leave on a two-week recess for the Passover and Easter holidays, there's almost no chance that tax reform could be accomplished with the time remaining.

In fact, the only major legislation he may sign is a necessary bill to fund the government and prevent a shutdown on April 28, when the current funding bill expires.

In order to keep the government funded and avoid a shutdown, Republicans may have to make huge concessions on Trump's plan to build a physical wall along the U.S.-Mexico border, according to Politico.

Even some of his executive orders have taken hits

To be sure, Trump has signed a number of executive orders since taking office on Jan. 20 that make good on his promise to roll back regulations.

But many of those rules are likely to be challenged in the court system — and could take years before they are implemented — according to Vox.

Some of those orders have already been blocked by federal judges. That includes two versions of his controversial travel ban, both of which were blocked by a handful of federal judges shortly after their signing.

In fact, Trump's attempt to pause the admittance of immigrants from six majority-Muslim nations, as well as all refugees from across the globe, for a 90-day period may expire before the order fully makes its way through the courts.

It's already been 60 days since Trump signed the first travel ban that was blocked by the federal courts. And it's been nearly a month since he signed the amended order, which sought to rectify some of the original's legal and logistical issues, yet was still thwarted by the court system.

Both orders asked for members of his administration to review the country's vetting process for immigrants and refugees. It's unclear whether that review process has been going on while the order makes its way through the courts.

Trump's inability to pass a major piece of legislation in his first 100 days in office pales in comparison to former President Barack Obama, who had signed three major pieces of legislation by this point in 2009, and had an approval rating above 60%, according to Gallup.

Ten days into his presidency, Obama signed the Lilly Ledbetter Fair Pay Act to try and fight female wage discrimination, a bill he touted throughout his presidency. On Feb. 4, 2009, Obama signed a bill extending health care to low-income children. And on Feb. 17, 2009, he signed the American Recovery and Reinvestment Act, a stimulus package meant to bolster the economy — which was in free fall thanks to the Great Recession.

At the end of his first 100 days, Obama had a 69% approval rating, according to a Washington Post poll. Trump's legislative and administrative failures have caused his ratings to tank, a historic low for a newly sworn-in president. Just 36% of adults approve of the job Trump is doing as president — lower than the worst approval ratings Obama and former President Bill Clinton ever faced in their eight years as commander-in-chief.