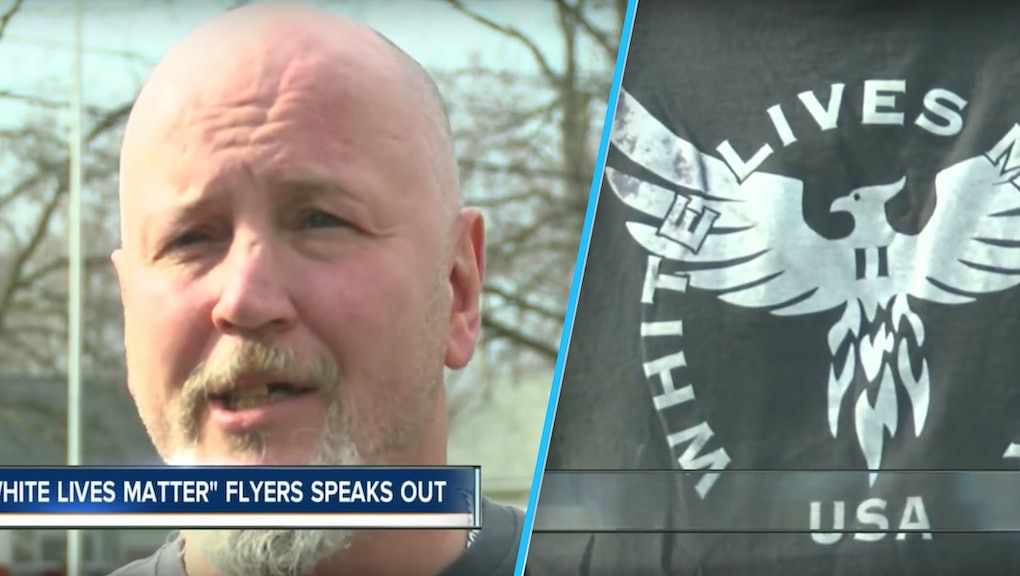 Some people are proud to let their racist flag fly.

"The purpose of these flyers is to raise awareness with whites about the plight our people face in this country," Lacy told WKBW. Lacy says all of the information is factual.

"There was crime statistics based on race which is part of the FBI database," he said. "It's not something fabricated out of the blue, you know?"

Lacy told WKBW he does consider himself racist.

Most of the statistics on Lacy's draft don't hold up to basic scrutiny. The very first bullet of his crime statistics has a contradiction in it.

So it is seven or eight?

Lacy might have confused that number with a number from a study released earlier this month that showed that black people were seven times more likely to be wrongly convicted of murder than white people.

A quick Google search of the phrase "Blacks are 39 times more likely to commit a violent crime against whites" brings up word-for-word matches to a bevy of right-wing sites, as well.

And while it is true black people are more likely to go to prison, it's much more a result of the prison-industrial complex, mass incarceration and the school-to-prison pipeline than any inherent propensity for violence.

Lacy's flyers also ignore the social and structural factors behind violent crime, especially the crushing poverty many black people in America face. Sociologists Ruth Peterson and Lauren Krivo wrote in Divergent Social Worlds, "Crime rates are higher on average in African American than other neighborhoods, not because this group is more criminally oriented, but because African American communities have the highest average levels of disadvantaged social conditions owing to the role of race in structuring opportunity and community access."

And as for the rape statistics Lacy states, those are taken from right-wing conspiratorial viral memes. Sociologist Philip Cohen debunked these numbers in 2016 and showed the numbers were based off of an extrapolation from a small number of reports, not from the actual number nationwide.

Lacy said since he distributed the flyers, he's received positive feedback and plans to distribute them in neighboring communities, as well.