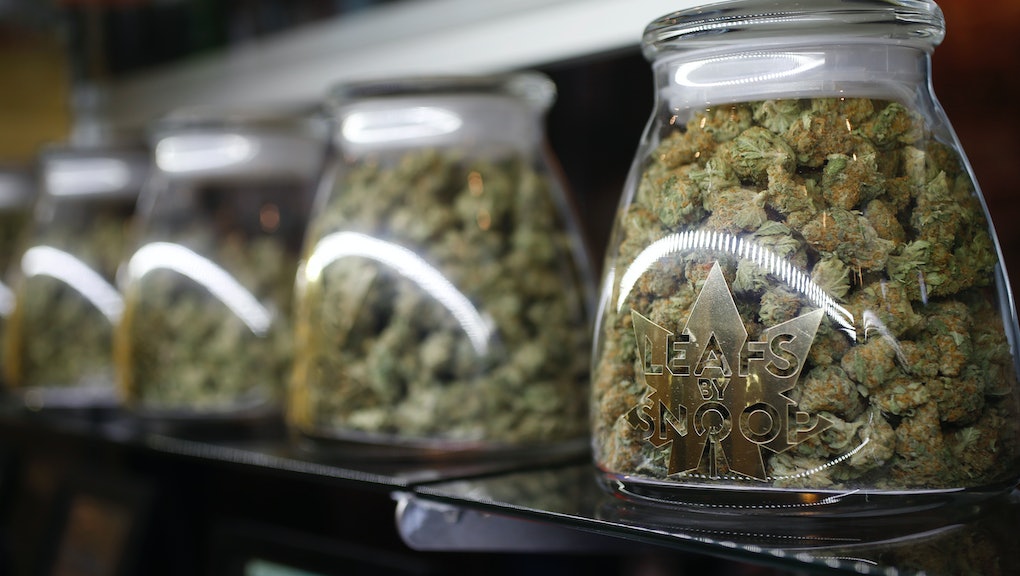 So, you've figured out how to get a medical card for marijuana, or just walked into a legal recreational pot shop. You've settled on how and where to smoke (or vape) it. You've bought a good amount — at least an eighth, or maybe a quarter — meaning you're not going to burn through it all in a night. You've had a joint's worth or two, and that's plenty for the moment.

What do you do with the rest of it?

Weed storage was once bound up with secrecy: Successfully hiding it from your dorm's RA or some other meddling authority figure often took precedence over the actual manner of containment. I myself used to keep it in a Ziploc bag stuffed into a hollowed-out part of an easy chair (my mom found it anyway). But given that marijuana can deteriorate in certain conditions, and the increased openness of weed use as legalization marches on, it's probably time to figure out some better solutions. Here's what you need to know about storing your bud to give it the longest possible shelf life.

The ideal conditions for marijuana storage

First off, you need to keep marijuana in something. I'm sure nobody is just leaving it in a pile on their desk — right? — because that'll dry it out, making the smoke incredibly harsh. Even in a plastic baggie, the preferred container for black market dealers, weed will be brittle in a month or so. The plastic jars you get from dispensaries aren't much better, according to Thrillist, since their "static charge can fry succulent trichomes," frosty little hairs that carry a great deal of THC, the psychoactive chemical in marijuana.

Instead of treating your weed like any other medicine, start thinking of it as what it is: an herb. Much like the stuff you use to season your cooking, marijuana does best in the dark (light is part of what makes your weed dry when you leave it out), relative coolness (heat will dry it out as well), and, perhaps counterintuitively, a dry atmosphere (moisture promotes mold, which nobody wants and is dangerous to consume), though, of course, not too dry.

You also want to limit oxygen exposure and your own physical contact with the buds, as both will accelerate the crumbling of those nice, firm buds into a fine powder — or "shake" — that some find unpleasant to smoke.

Now that we have a sense of what it takes to keep your weed fresh, flavorful and potent, the question remains: What exactly do you put it in?

The first answer is obvious to anyone who has stepped into a pot shop or medical dispensary — glass jars. Whenever you buy loose weed, it's coming out of a sealable glass jar, which cuts down on oxygen exposure and helps maintain stable humidity. Bonus points if you can get one with an airtight lid, available for cheap at any number of homeware stores.

High Times also notes that you can go for a darker tint on the glass to protect your stash from the sun, and shouldn't have too much extra space in the jar, lest the additional air dry the buds out. Overall, this is probably the simplest, safest bet for storage.

Of course, when it comes to marijuana, some people will always prefer to go high-end. That's where a brand like Infinity Jars comes in. For a few extra bucks, you can keep your weed in a leakproof, smellproof glass jar specifically designed to block out all visible light, thereby extending freshness and potency for longer periods. If you want a true vacuum seal, plus some additional color options, check out the jars from Tightvac.

The jar itself doesn't have to be placed anywhere in particular — a shelf where it won't be subject to temperature fluctuations or direct sunlight works just fine.

OK, but what if I want to get really fancy?

You're in luck. So far we've looked at jars that make great weed containers, but now we'll consider some products that do more than keep out air and light.

One brand name that comes up often here is CVault. These stainless steel, food-grade storage containers come in a variety of sizes and feature several sturdy clamps for the utmost security. They also come with humidifier packets that some stoners claim will rejuvenate your bud even if it's already dried out.

Like all the containers discussed above, however, the CVault wasn't developed with marijuana in mind. For the true connoisseur with cash to burn, you can go for the ultimate in weed luxury: a cannabis humidor. For a couple hundred bucks, you can get set up with a Cannador — a sleek wooden box with all the right cups and drawers for customized storage as well as a humidity sensor that ensures the right moisture ratio. With another accessory, you can even sync the Cannador to your smartphone to monitor humidity and temperature. Nerd alert!

Is this overkill? Maybe. But it's also pretty darn cool.

Where you definitely shouldn't keep your weed

A lot of marijuana storage is just common sense. Don't leave it where kids or pets or mooching roommates can get into it, obviously. Probably don't wrap it up in aluminum foil and tuck it under your mattress, either. Unless you're desperate.

Yet there's one storage strategy stoners have been using for years in the mistaken belief that it will keep their marijuana fresher for longer: putting in the the refrigerator or the freezer. You'd think that, in the same way the fridge prolongs the edibility of fruit, veggies, meat and dairy, it might preserve marijuana's integrity — when in fact it does the opposite.

Cold actually degrades THC and other cannabinoids, and the constant changes in temperature and humidity makes things even worse. The freezer can additionally separate the trichomes (those THC-rich hairs) from the pot itself by crystallizing them into ice-like particles that break off the bud, which is bad news for anybody looking to get high with those nugs. Nevertheless, the myth that you should freeze your weed persists across the internet.

Good thing you know better — and your marijuana will last that much longer.