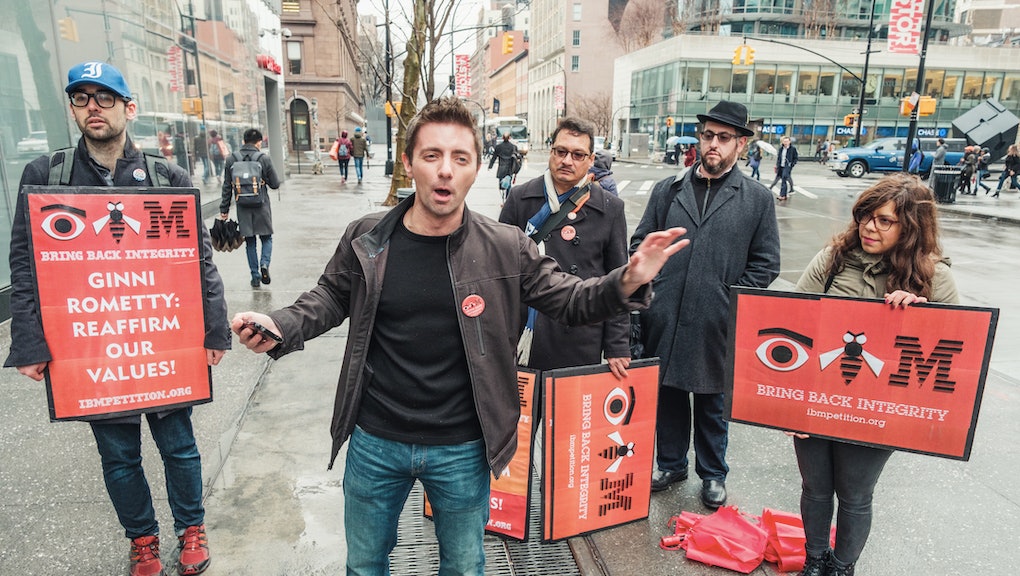 When IBM's CEO, Ginni Rometty, wrote a glowing letter to President Donald Trump after his inauguration, it landed poorly, to say the least.

Many used the opportunity to remind the public that IBM collaborated with the Nazis throughout World War II. One senior content strategist quit, writing an open letter about Rometty's "tacit endorsement" of Trump's platform.

Now, IBM employees are drawing a line in the sand. In New York City on Tuesday, IBM employees showed up at the IBM Watson Center to deliver a petition demanding the company acknowledge the diversity of its staff and not work to further the more xenophobic aspects of Trump's agenda.

"Our executive's hollow, corporate statements don't reflect our values. It's the workers that bring these values to life," IBM engineer Daniel Hanley, who began organizing IBM workers shortly after inauguration, said by phone on Tuesday.

"Our executive's hollow, corporate statements don't reflect our values. It's the workers that bring these values to life."

The letter has five demands: To allow IBM employees to recuse themselves from unconstitutional work, to increase diversity programs, to avoid using Trump-owned assets throughout the business, to shore up severance pay policies and to increase the company's contributions to employees' retirement funds.

"We need a clear statement that in the current political context, IBM is willing to commit to these concrete terms," Hanley said.

The action in New York City was the second this week. On Monday, IBM employees held a similar event for workers in Atlanta. The effort to push back against their CEO's sentiment introduced many IBM employees to activism and organizing for the first time.

"It's something we just don't talk about — our values and practices," Sesha Baratham, an IBM consulting services worker based in Boston, said by phone. "It's like finding a real moral, social consciousness in IBM."

And for that, Baratham said, it takes solidarity between workers demanding change from within.