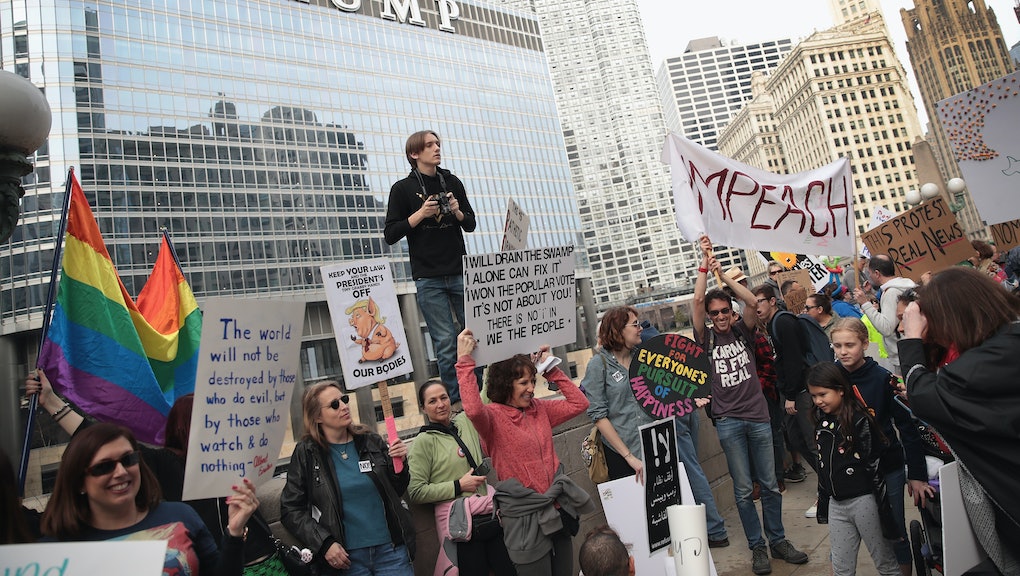 Will millennial activism carry over to voting? Survey says the jury's still out.

The upset election of President Donald Trump and all that came with it has spurred left-leaning United States residents to a new wave of political activism.

But according to the results of a new poll by SurveyMonkey, it remains to be seen whether millennials carry the passion of those social media clapbacks and marches to the polling booth.

SurveyMonkey analysts broke out millennial-specific data from the study exclusively for Mic.

Notably, in 2016, 44% of millennials "actively shared opinions on social media" — compared with 36% of the overall population — and 16% marched.

However, just 59% of millennials told SurveyMonkey they actually voted in 2016, compared to 75% of the overall population in the study.

SurveyMonkey polled 8,715 adults from March 10 to 16, with results weighted for various demographics pulled from the Census Bureau's American Community Survey.

The new study asked about activism plans for the next two years. SurveyMonkey says millennials, by their own admission, may outstrip other age groups on taking to the streets — but not in casting ballots.

About 32% of the 1,588 millennials polled said they plan to participate in marches, a notably higher rate than the 21% of the overall population who said the same.

Millennial vows to keep sharing their views on social channels was higher than the general public as well, at 43% to 39%.

But with the critical 2018 midterms ahead, as well as the potential to participate in local and special elections, only 63% of the 18 to 34 demographic said they plan to vote in the next two years, compared to 73% of respondents in the overall poll.

Much has been made of the liberal leanings of millennials, many of whom came of voting age and had their first taste of political activism as supporters of the presidential aspirations of Vermont Sen. Bernie Sanders.

According to a buzzed-about SurveyMonkey projection map released ahead of Election Day, if only millennials had voted, Democrat Hillary Clinton would have destroyed Republican Trump in the Electoral College results.

From signing petitions to boycotting products to donating to candidates, "across a half dozen types of political activity, self-described liberal Democrats are typically twice as likely as other voters to report plans for activism," SurveyMonkey reported in its latest findings. "Conservative Republicans report plans for activism more often than other Republicans or independents, but their planned activism still falls significantly short of liberal Democrats."

Raw data from the new survey shows younger people clearly identifying more strongly with the left than other age groups and taking greater issue with policies such as the president's controversial travel ban.

What's less clear is if millennial voting rates will catch up with the dedication of the older set.